Is the US economy about to tank?

Stock markets are hovering near all-time highs, valuation levels of stocks have breached previous records, long-term interest rates are rising, and the yield curve is flattening. These are rather conflicting signals. What is going on with the US economy?

Credit markets are sending some rather strong recessionary signals. Last year, the (YoY) credit impulse of the US economy fell to levels not seen since 2008 (see the Figure below). This is a troubling observation, because the end of the credit cycle also means the end of the business cycle (see Q-review 2/2017). 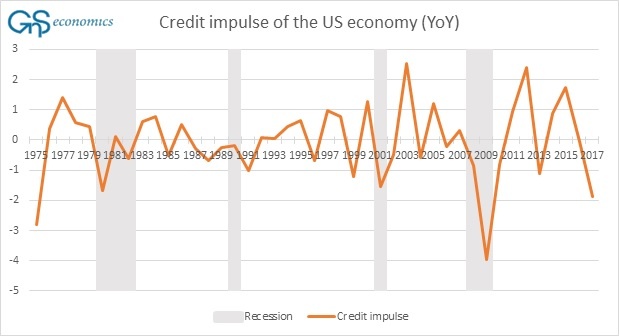 Although the US tax reform may give some boost for the credit markets, it is unlikely to turn the trend around. This is because businesses and consumers are maxed out. Higher interest rates cannot be taken as a sign of improving economy, since they will just stress the credit market even further. The withdrawal of central bank stimulus (the end of global QE) is also likely to be the main factor behind their recent upward trend. For the same reason, one has to be cautious when making any predictions based on the yield curve.

Credit markets are signaling that the current expansion is almost done, and a recession is looming. The downturn, however, may turn out to be something very different.

previousThe world economy is set to fall
nextThe ghost of 1987