Zombies and the end of the ‘global synchronized recovery’

Several economic indicators have turned to the south at the beginning of this year. They clearly indicate a slowing economic momentum (see this, this and this). This is something that was not supposed to happen. The tax cuts by president Trump and the long-awaited recovery of Eurozone should have carried us to a new phase in global growth. At least, that is how the narrative went.

In June 2017, we warned that the global economic expansion is on its final leg and that signals from China and the US indicate a slowing economic momentum. We showed that China is closing the limits of its growth model because its investments are turning increasingly unproductive and its credit has grown at unsustainable rate for several years. In the US, the credit impulse was in a clear decline which, in a mature business cycle, tends to foretell of an economic downturn. But the business-friendly policies of president Trump, the economic stimulus ahead of the 19th National Congress of the Communist Party in China and the “liquidity tsunami” launched by global central banks kept the global economy humming till the end of the 2017.

At the beginning of this year, everything changed. China started to actively curb its excessive credit creation, the quantitative tightening of the Fed started in earnest and the geopolitical risks re-surfaced. Thus, the main pillars of the “global synchronized recovery” started to falter. However, the main trigger of the sudden slowdown is likely to come from the zombified global economy.

In September 2017, we warned that the unorthodox central bank policies have created an ever-growing number of unprofitable  “zombified” firms. A zombie company is a firm that is unable to cover its interest payments from its operating profit (stricter criteria also exist). The zombie firms survive if credit is plentifully available at a cheap price. After 2008, the global central banks created such an environment with very low interest rates and quantitative easing programs.

What the zombie firms do is that they crow out the birth of new productive firms. A recent study shows that while the Outright Monetary Transactions, or OMT -program, launched by the European Central Bank in 2012, improved the health of the banks on the periphery of Eurozone, those banks extended their loans mostly to low-quality borrowers to which they had a pre-existing lending relationship. This is understandable because if these companies would have failed, they would have taken the banks with them. However, this also greatly increased the number of the zombie firms and obstructed the creation of healthy new firms by diverting bank lending to the ‘zombies’. Moreover, the credit misallocation and market distortions created by the OMT program collapsed the overall productivity in industries where the fraction of the zombies  was high. The historical example of Japan shows that if the ailing firms are provided with cheap credit, the job creation is depressed and the overall productivity growth is hindered.

The ‘zombification’ of the world economy is visible in productivity growth. Since 2008, the total factor productivity (TFP) has been in constant decline except the minor increase in 2010. This is the longest decline in TFP ever seen. We can safely assume that the zombie companies, created by the central bank policies, are the main source for this. 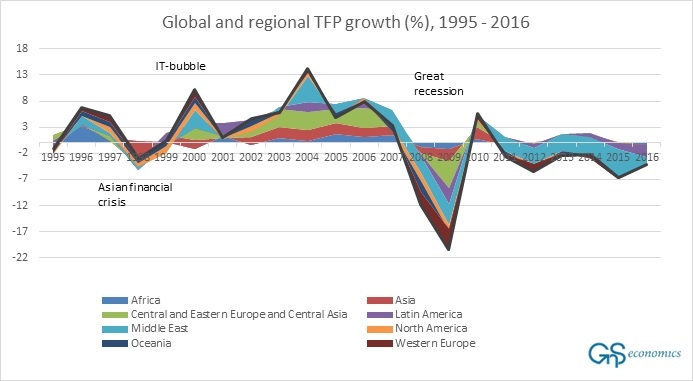 Global (back line) and regional growth of total factor productivity (%) from 1995 to 2016. Source: GnS Economics, The Conference Board

The recovery that never happened

The “global synchronized recovery” or growth was nothing more than a pipe dream driven by the unsustainable credit expansion in China and the equally unsustainable bond buying operations by the global central banks. The fact is that the world economy never really recovered from the financial crisis. This is the simple message of the feeble productivity growth.

The central banks pulled all the stops in their efforts to prevent the financial crisis from turning into global deflation. They succeeded, but at the same time they created an unsustainable recovery which gave birth to the hordes of the ailing zombie firms fed by the excess credit and liquidity. The zombie companies cannot survive when the interest rates rise and this is exactly what happened when the Fed enacted its QT-program. Dollar liquidity started to withdraw and Libor-rates started to rise creating a global liquidity and credit shocks.

Therefore, we are likely to face a dramatic slowdown in global growth during the coming quarters, followed by a worldwide wave of corporate defaults ending the “global recovery” narrative which has been supporting the asset markets lately. Thus, the bull market will end and over-valued capital markets are in a serious risk of a crash as we warned in December. Asset market crash would ignite a global financial crisis and lead the world economy to a depression. No one probably though that a zombie apocalypse would be quite something like this, but we should start to prepare for it nonetheless.