10 years from Lehman. And nothing has been fixed

The general storyline of the Global Financial Crisis (GFC) goes about like this: funds from all over the world headed to the US, where the banks, to finance the housing market boom, developed unsound financial products which then brought down the global financial order. Although this description has some seeds of truth, the crisis was much larger in the sense that it could not have been possible without the whole system playing along.

Also, very little has been done to fix its ‘original sins’. Moreover, by pushing the debt-cycle even further, central bankers and political leaders have created an even more dangerous economic situation by their efforts to save and stimulate the economy.

It is true that the savings glut, caused by the oil-rich nations and China in late 1990’s and early 2000’s, created a capital-rich global financial environment. That capital was looking for a reasonably safe investment with relatively good returns. Still, the ‘financial alchemy’ that led to the crisis was born mostly out of domestic needs of the US banks.

Banks are always looking ways to diminish their risks and to increase their profits. The credit default swap (CDS) developed in the 1990’s was an excellent mean to diversify risks. In it, the risk of a loan is insured by a third party to which the bank pays a fee for the insurance. This rather well functioning risk distribution through diversification and hedging was elevated to a new level by creating a shell-company, a special purpose vehicle (SPV) to insure the loans. SPV, established by the bank, bundled the risk and sold it to the investors according to the calculated tranches (junior, mezzanine and senior) of risk, and bought the US treasuries and other AAA -rated securities to cushion against losses. Mathematically, it was shown that, by bundling of the loan risks, the overall risk of the loans and thus the assets build on them greatly diminished. This implicated that the SPV needed to obtain only a small amount of collateral to cover the possible losses. The remaining risk was thought to be so low that it was denoted as the “super-senior”. The construct was called Bistro (Broad index secured trust offering). The Fed approved it and allowed the banks to remove the loan risk from their balance sheets by using this scheme. This marked the beginning of the rise of the “shadow banking sector”.

Further innovations followed, including the synthetic collateralized debt obligation, CDO, and the structured investment vehicle (SIV). CDO was a standardized version of the Bistro, which could be constructed from not just CDS and other derivatives, but also on different debt securities, like mortgages. The SIV:s were “quasi-shell companies” founded by the banks to buy, bundle and sell the loans. They operated outside the balance sheet of the banks, because they were funded with loans with maturity shorter than one year. Basel I regulations stated that the banks needed no to reserve the collateral for such loans.

The ‘Achilles heel’ of the structured mortgage products was the difficulty to estimate their overall risk. On the corporate loans, where the collateralization basically began, there were usually decades of detailed data from the companies, whereas from the mortgage holders there was no information at all. The housing market had not had a serious fall in 70 years, so it was impossible to evaluate how the mortgages would behave in serious downturns. Regardless of these shortcomings, the rating agencies gave high ratings, especially for the super-senior and senior tranches. The rating agencies usually received higher compensation for higher ratings and thus they sometimes even gave advice to the issuers on how to bundle the loans in order to achieve the best possible rating. Because of the high ratings and relatively high yield, the demand for CDO:s was high across the globe. They were bought by other banks and even by pension funds.

Thus, supported by the high demand for CDO:s, banks were able to transfer most of the loan risk outside their balance sheets in a systematic manner, which greatly increased their leverage and profits.  The low rates of the Fed fueled the US housing market and it became the epicenter of the “CDO machine”.

The housing market quickly proceeded to a total hustle. At the peak of the speculation, the banks and the loan brokers issued mortgages to people with No Income, No Jobs and No Assets (NINJA). People speculated with the market by buying several houses to be sold with profit later. The US housing market became a classical Ponzi scheme. Many mortgage holders were able to finance neither the principal nor the interest from their cash flows; just the increase in the value of the house mattered. Over decades and especially in the early 2000’s, the US government fueled this development by pushing the banks to lend to ever poorer households.

In the Spring of 2006, the US housing market turned the corner. This increased the loan defaults almost immediately because the speculators were ‘under water’ very quickly (due to Ponzi). At the same time, the interest free period of many mortgages ended. Entire areas of houses were abandoned which led to further price decreases, to further defaults and to increasing the abandonment of houses. A systematic, clustering cycle of price falls followed. Banks had assumed that the losses of the loans would follow a normal distribution but this was utterly broken by the systemic and clustering nature of the mortgage failures.

As the mortgage failures mounted, so did the losses inside CDOs. Their values started to waver. In the fall of 2007, the stress in the interbank markets started to rise (see the Figure below). The mortgage-backed commercial paper market practically froze over. By early 2008, it became clear that also the values of some products with the highest rating (AAA) shall fall. The markets lost faith on practically all mortgage-linked products and the SPVs and SIVs faced the day of reckoning. No one would buy their products and the value of their collateral started to fall (many had bought AAA -rated CDOs as collateral). The “super-senior” risk, calculated in hundreds of billions of dollars, started to materialize in the balance sheets of the banks. Claims to insurers of the “super-senior” risk, like AIG, witnessed a deluge of claims. To make matters worse, many banks had acquired AAA -rated CDO:s as collateral. They were thus hit with massive losses against which they had only minimal sub-par collateral. Trust evaporated, the interbank market froze over and the financial system started to grind to a halt. 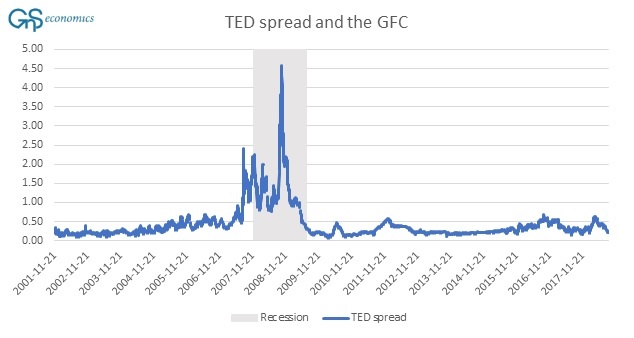 The “cure” as the pathway to the coming crisis

After the Panic of 1907, the Fed was essentially setup to guarantee the liquidity of the banking sector in the case of crisis. And this is what it furiously did after the GFC got into full gear in the end of 2008. Politicians also stepped in. Deposits were guaranteed, amble liquidity was provided to banks and ailing systemically important financial institutions were kept standing. This halted the financial crisis morphing into a systemic crisis which, according to reliable sources, was just hours away (see one of our earliest sketches of what it could look like). However, after that, very little was done to improve the situation.

Practically, only Iceland broke up its major banks and it did it only because it was forced to (the assets of the banks were around 900 % of the GDP). Europe basically saved all the banks and, in the aftermath of GFC in 2010 – 2012, also the countries. The US let Lehman to fail but this had several unintended consequences.

The collapse of Lehman Brothers on 15 September (the bankruptcy was announced late Sunday on the 14th) is the culmination point of the GFC. It is also the culmination point on our journey to a new global crisis. The failure of Lehman shocked the central bankers and political leaders so that they retained to a full conservation mode. Examples of banking crises in the Nordics, where the failed banks were wound down and the financial sector was restructured, were forgotten. Even though better capitalized, the banks, dubbed “too big to fail” in 2008, are even larger now in the US. The European banking sector is undercapitalized and full of zombies and it’s kept going only by the liquidity support of the European Central Bank. The economy of China is facing a reckoning which can only be described as the biggest debt bubble ever. The banking regulation has been likely to push more banking into the “shadows”.

It is almost certain that the creators of the Federal Reserve, or other major central banks for that matter, could not have envisaged that at some point they would provide funding with near zero or even negative interest rates for a decade and that they would end up owning a large chunk of the capital market. Still, it’s where we stand. The central bankers, in an exception of the Fed, are still in a full stimulus mode.

Alas, the imbalances that plagued the world economy before 2008, are even larger now. Debt in the world economy is considerable higher and the extended use unorthodox policies of the central banks have created a platform for speculation of an unprecedented scale. The ‘lost decade’ of Japan shows very clearly that policies, which save everybody and provide the banks with almost endless liquidity, lead to a ‘zombified’ banking and business sectors unable to grow and are in a constant risk of failure. Now, this is a global issue.

GFC was not born out of void. The imbalances and risks were visible before the crisis hit. It was born out of a combination of speculation, regulatory failures, moral hazard and incentives to get into debt. Very little has been done to fix these issues and, in some cases, even the opposite has materialized. This policy of “more of the same” has the potential to bring down the global economy in the future. The cure may well turn out to be worse than the disease.

The “Prepper’s Bunker” -report, where we explain how to prepare for the coming crisis, is available atGnS Store

Keep up-to-date on global developments in as well on growing risks in the global markets through our Q-Review -reports. The annual subscription (4 issues) is available atGnS Store

previousTurkey: A harbinger of a global debt crisis?
nextQ-Review 3/2018: How the Eurozone breaks