Q-Review 4/2018: The path to the Global Depression

The world economy has never faced a more perilous situation. While many have just started to debate whether a recession will start in 2019 or 2020, very few perceive the ‘black hole’ the global economy is about to get sucked into.

The hole has two main “gravitational forces”: the wide-spread mispricing of risk and stagnating productivity growth. Central bank meddling with their bond buying programs (QE) have seriously distorted prices in the capital markets, which means that risk has also been mispriced in vast magnitude. The implications and repercussions of the six-year period of stagnating global productivity growth has also not been understood. These intertwined developments will lead the world economy into a serious economic downfall, a Global Depression.

See no risk, hear no risk

We devoted most of the March issue of our Q-review to explain how the asset purchase (QE) programs of the central banks have created an environment which encourages risk-taking, leverage and yield-hunting. At the heart of it is the suppression of yields on assets considered safe, most crucially government bonds, which have been the primary target of their QE-programs. QE created a stupendous, multi-year pulse of artificial central bank liquidity forced into the financial system. As the major central banks kept on pumping it eventually ended up increasing the price of almost every single asset class in the world with the possible exception of precious metals.

While leverage can be usually measured with some suitable metric (like debt-to-income or -equity), evaluating financial risk requires a reference point that is considered riskless. This creates a perplexing problem, because the QE -programs of the central banks have created a situation where we do not have any un-manipulated reference points telling us what the “riskless” rate of return actually is. So, there’s currently no way of telling the difference between assets that can be deemed safe and those which cannot, and thus no way to measure the risk of a financial asset with any reasonable certainty. True risk will be revealed only after the artificial central bank-induced liquidity recedes and the asset bubble bursts. When this happens, we are likely to see the balance sheets of numerous banks, corporations, governments and households deteriorating into insolvency. Alas, central banks have effectively created Black Swans, unknown and unanticipated large-scale events, that threaten to upend financial markets. 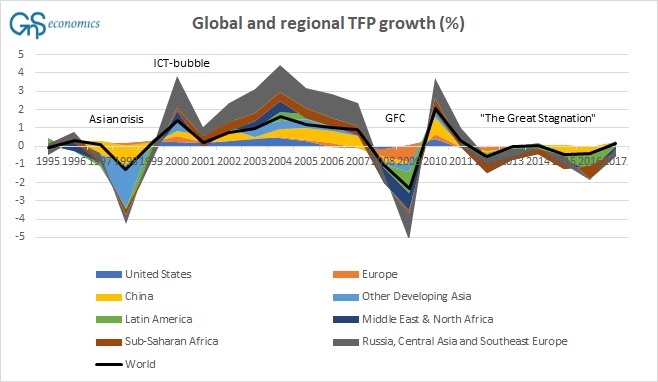 The stagnation in productivity growth demonstrates that companies have not been able to increase the effectiveness of their production (productivity), the great and primary driver of durable improvements in standards of living. Thus it shows, effectively, the ‘zombification’ of the global economy.

When interest rates rise and the availability of credit diminishes, the “zombies”, that is, companies with over-levered balance sheets unable to cover interest costs, will begin failing. The bankruptcy of the global conglomerate of Steinhoff last year and the ailing finances of US corporate giant General Electric are the first signs of this. The fate of GE and Steinhoff will be shared by many when the crisis gets into gear. It is, for example, estimated that over 14% of companies in the S&P 1500 are zombies.

This diminution in the rate of productivity growth also shows that the world economy has not been able to grow organically, but has depended on continuous stimulus (which has made the problem worse). When this stimulus is withdrawn, the economy will collapse.

These will hit all sides of the global economy reversing growth of global trade, financial flows and income. There’s absolutely no other end to this than a global depression.

Full report describing the scenarios depression could take, their probabilities, growth forecasts and a description of the eventual recovery of the world economy is available atGnS Store