It works, until it doesn’t

As expected, increased ’dovishness’ by the Fed has gotten markets rallying. Both the S&P 500 and DJIA have touched new highs. From the perspective of late last year, such massive rallies seemed unlikely indeed. While some kind of a Fed pivot was to be expected, the response has been nothing short of “maniacal.”

In March, we noted that markets seemed completely oblivious to the fact that the ability of monetary and fiscal stimulus to uphold economic growth was declining fast and that the momentum of the global economy seemed to be eroding quite notably. But the “monetary drug” administered by the Fed apparently brushed all worries away.  Unfortunately, such an artificial remedy only works until it doesn’t.

China on the way down

China has been active on our radar since September 2017, when we realized that it had—almost all by itself—supported the growth of the global (real) economy since early 2009.  At that point we also warned that the effectiveness of Chinese debt stimulus was fading fast. During the first part of the current year this issue has grown even more pressing.

Despite record credit injections and fiscal stimulus (see our June 2019 forecasts for details), Chinese economic growth has remained at sub-par levels. In June, the aggregate social financing of the real economy, again, grew at record pace (see the Figure below), but the response of the Chinese economy was lacklustre, growing just 6.2 percent at an annualized rate. This was the slowest rate since 1992.

As shown in Figure below, the cumulative aggregate financing of the Chinese economy is at record levels with record monthly increases in January, March and June. Even when accounting for the deleveraging of the ‘shadow banking sector’ this is a troubling trend, especially as Beijing has signaled that more deleveraging may be on the way. The Chinese economy is simply not responding to stimulus as before. This implies that the most crucial engine of the global economy is stalling. 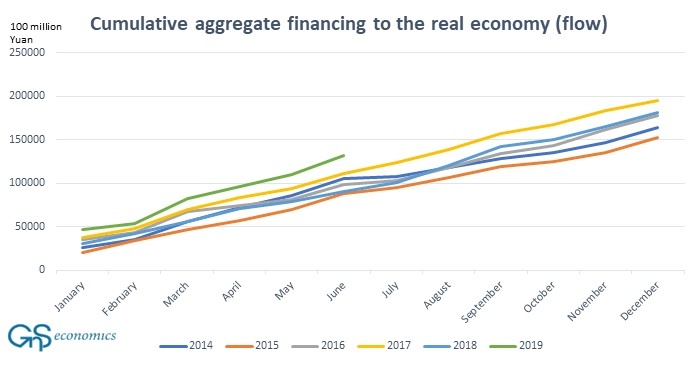 Desperation at the Fed

The tone of the Federal Reserve has turned more dovish basically throughout 2019. First, the FOMC panicked at the turn of the year due to rapid and steep deterioration in the stock and credit markets. After that, the Fed has basically turned into a market support machine, and for an obvious reason.

It’s quite clear that if the massively over-valued stock and credit markets crash, so does the economy, and the Fed will be left with little means to stimulate. This implies that even with the (comparatively) robust growth rates of the U.S. economy, the Fed is cutting rates just to support the markets. But this strategy, obviously, only subjects the markets and the economy to ever-greater risks when the economic downturn and market crash eventually arrives. Moreover, as we explained in March, the Fed is trapped. Manic markets go only up or down:  there is no “soft landing” in sight.

Recently, a truly ominous “milestone” in market-meddling was reached when the yields of some Euro-junk bonds turned negative. Thus, now even the debt of companies that have a higher probability of default are giving out negative returns to investors! This yield-chasing madness is a direct result of incessant market interference by the Fed and other central banks (see Q-Review 1/2018).

The bailouts and timing

There have been at least three market bailout operations by the major central banks during the past two years. In November 2017, there was a run on the junk bond markets, which was halted by the liquidity injections and asset purchases of the BoJ and the PBoC. In March 2018, the European corporate bond markets froze over, which forced the ECB to step in clear the logjam by further purchases of corporate debt. In December 2018/January 2019, the PBoC and the Fed joined forces (figuratively) to stop the market rout.

As we explained in our June forecasts, the desperate efforts of China and the Fed to prolong the expansion, if continued, may postpone the day of reckoning for few quarters. But, it’s also impossible to estimate how long manic markets will respond positively to monetary stimulus when the real economy starts to crater.

Like manias, panics also start abruptly and often without a clear warning. With its relentless efforts to support the markets, the Fed is inadvertently increasing the likelihood of an abrupt market shock.

With the global economic downturn gathering steam—which will also likely become obvious in the U.S. during the fall—downward pressure on the markets will just keep growing from this point on. It is consequently not outside the realm of possibility that we may be heading toward a cataclysmic market event similar to what was experienced in October 1929.

It remains to be seen whether we will see a supportive rate cut by the Fed next week and the eventual restarting of QE in the event of an unforeseen market event (or even beforehand). The truly worrying issue is that such actions do nothing to solve the underlying issues plaguing the world economy, but, rather, exacerbate them.

Evidence concerning the negative effects of monetary meddling on the drivers of long-run growth, investments and productivity is mounting (see, e.g., our blog on Japan and on the ‘zombification’ of the global economy as well as this, this and this). Further CB meddling, whether effective in supporting capital markets or not, will not just increase distortions, but will likely also cause the economy to weaken further—possibly to the point of collapse.

Central bankers, in their desperation, are playing a dangerous game.