A tale of two deflations

This post has been co-written with Dr. Peter Nyberg.

Japanification is a term that has re-emerged recently.  It refers to the prolonged economic stagnation of Japan, which commenced after a financial crash in the early 1990s. The stagnation of Japan has been marked by very low inflation (recurring periods of deflation), stagnating productivity growth and a massive increase in government debt.

However, at the same time as the financial crisis that started the long stagnation in Japan, there was a similar crisis in a small northern country, Finland. Finland had followed such a similar economic trajectory as Japan that it was dubbed the “Japan of the North”. However, while Japan fell into a prolonged economic malaise, the Finnish economy returned to growth just four years after the onset of the crisis (see Figure 1).

What caused the difference between these two outcomes?

Figure 1. Volume of nominal, local currency GDP per capita in Finland and Japan between 1969 and 2018 (1969=100). Note: due to the recurrent deflation periods in Japan, comparisons using the constant (real) GDP per capita are not feasible. Source: GnS Economics, World Bank

The boom of Finland and Japan

Both Japan and Finland were relatively poor countries in the 1950s. Both were on the losing side of the Second World War (Japan had primarily fought against the U.S. and Finland against the Soviet Union) which made them temporary outcasts in the new global political order. After they regained a place in global politics, both established an ambitious industrialization program.

In both countries monetary and fiscal policies, under a regime of currency regulation, were used to channel resources towards industrialization. Capital flows were tightly-managed, and interest rates were set below market-clearing levels. This forced national savings toward investment and allowed for only essential consumption.

In Japan, the export sector grew fast with the composition of exports changing over time from toys and textiles to bicycles and motorcycles and, eventually, to steel, automobiles and electronics. In Finland, foreign trade was initially heavily concentrated with the Soviet Union, including exports of heavy metal products, and imports of crude oil for refining and eventual re-export to western economies.  Exports to western economies, particularly forestry products, started to grow as war reparations ended and repeated currency devaluations kept Finnish exports competitive. Reconstruction supported domestic industrial production as well when external demand for Finnish exports slowed.

In the 1970s a global trend of financial deregulation started in the U.S.  After the oil crises of the 1970s resulted in stagflation in both Japan and Finland, deregulation eventually spread to both countries by the 1980s with each government easing control over its financial sector. A massive financial boom followed due to the increased availability of capital.

During the 1980s, the price of real estate in Japan increased by a factor of six. At its peak, the value of Japanese real estate was, incredibly, double that of the entire U.S. The Nikkei stock market index rose 40,000 percent from early 1949 through late 1989, with the most massive increase during the 1980s. In the late 1980s, the market value of Japanese equities was twice the market value of U.S. equities. ‘

In Finland, the much-increased availability of foreign funding made prices in the stock market explode eight-fold between 1979 and 1989, the prices of real estate four-fold and foreign direct investments six-fold.  Speculation in various asset markets was endemic in both countries.

The crash and stagnation of Japan

The stock market of Japan peaked on the last trading day of 1989. It bottomed-out in the spring of 2003 after a fall of close to 80 percent from the peak. Commercial real estate imploded to approximately one-tenth of its peak value. Because the collateral of the Japanese banking sector consisted largely of real estate, bank valuations collapsed as well. Many industrial firms also suffered crippling losses from their investments in real estate. The frightening collapse of the stock market wiped-out a large part of the capital of banks, and a severe financial crisis ensued.

When the crisis hit, the Japanese government and the Bank of Japan (BOJ) enacted massive bailout programs. The BOJ started to reduce its target interest rate in 1991, which eventually reached zero in 2001. When the crisis intensified in 1993/1994, it started to act as lender of last resort, and also bailed-out several large financial institutions. In 2001, the BOJ enacted Quantitative Easing Policy (”QEP”), a forefather of the current Quantitative Easing, or “QE” now considered a standard “policy tool” by central banks globally.

The Japanese government subsidized firms to maintain employment, and banks were allowed to carry non-performing loans on their books without any demands on borrowers to restructure their businesses. Government policies permitted the use of accounting gimmicks, which allowed bank supervisors to implement policies enabling banks to understate their loan losses and overstate their capital.

Moreover, facing widespread public anger over bank bailouts, the government allowed, and in some cases even encouraged, banks to extend loans to ailing businesses (“evergreening”). Faced with an unpleasant alternative, the banks were more than happy to comply. Their lending operations diminished considerably and became biased towards unhealthy and unprofitable companies. The reason for this was simple: weak banks supported weak companies to prevent the losses that bankruptcy would incur.

The Japanese economy began to “zombify.”  Because banks extended loans increasingly to unproductive companies, this led to misallocation of credit on a massive scale resulting in a fall in the investment rate and a prolonged slump in total factor productivity. This in turn led the Japanese economy into a prolonged stagnation, from which it has yet to recover. Moreover, the Japanese government has supported its zombified economy with massive fiscal stimulus, which has pushed the government debt-to-GDP ratio to an astonishing 240 percent of GDP (see Figure 2 below).

The crash and recovery of Finland

The stock market of Finland reached its peak in April 1989. It eventually fell by 70 percent from peak-to-trough with banking stocks collapsing by over 90 percent. Housing prices fell by 50 percent. The crash in the asset markets inflicted crippling losses on the banking sector.

One of the largest banks of Finland, SKOP (the central bank of co-operative savings banks) failed and was taken over by the Bank of Finland on September 19th, 1991. It had engaged in a risky and aggressive expansion during the 1980’s, when the bank, in one example, issued credit lines to customers who had been rejected by other banks in order to gain market share. SKOP had also invested aggressively in the stock market and provided large volumes of foreign currency loans to households and companies. The falling stock market had already reduced its profitability and mounting business failures, combined with the evaporation of trust in the interbank markets, finally pushed the bank over the edge.

Within a matter of months, the Finnish markka lost over 30 percent of its value. Because many of the loans issued to households and corporations were denominated in foreign currency, their adjusted principal value and carrying cost skyrocketed. A wave of corporate bankruptcies and loan defaults by households and entrepreneurs followed. The crisis spread to other banks and the availability of credit and then consumption collapsed, taking the Finnish economy with them.

In a panic mode, the parliament of Finland passed legislation establishing a Government Guarantee Fund for the banking sector in March of 1992. It included strict conditions, including a demand that any bank receiving funds provide a detailed plan on how it would return to profitability. It also agreed to show flexibility on the loan conditions applied to financially-strained households and businesses, and the leadership of participating banks were required to personally commit to the specific program aimed at returning the bank to health.

In reality, the process of bank recapitalization was fairly chaotic.  At the very beginning there were no rules, no regulations and very little guidance or lessons available from abroad. There were mass terminations of credit lines, despite the rules agreed-to during the design of the bailout program. Gradually, however, the government became more skilled at distributing funds and regulating the recapitalization of Finnish banks.

Between 1991 and 1993 the GDP of Finland fell by an impressive 14 percent and unemployment rose close to 20 percent. Because the availability of credit diminished considerably, firms failed en masse.  Business bankruptcies tripled between 1989 and 1992.  Thankfully, a number of foreign financial institutions nevertheless continued to trust—and lend to—the Finnish government, thus preventing a total meltdown of the economy.

However, because only the most profitable Finnish corporations survived the crisis, they were able to eventually power a strong recovery, supported by the restructured banking sector. In 1994, the GDP of Finland grew by over four percent and in 1995 over five percent.

The recovery was first driven by the electronics, metallurgical, and engineering sectors with the traditional paper and pulp sector providing strong support.  The technology boom got into gear in 1997, and “tech” became the largest exporting sector in 2000. In just seven years after the crisis, the volume of Finland’s exports had more than doubled.

The crisis changed the Finland’s economy in many ways, ending, for instance, the old growth model and prompting the restructuring of the banking sector, but it was also a reminder that the export sector is the leading sector of the economy. Domestic demand, for example, exceeded the 1990 level only in 1999. After a massive surge in government debt during the crisis, the debt-to-GDP ratio quickly stabilized (see Figure 2). 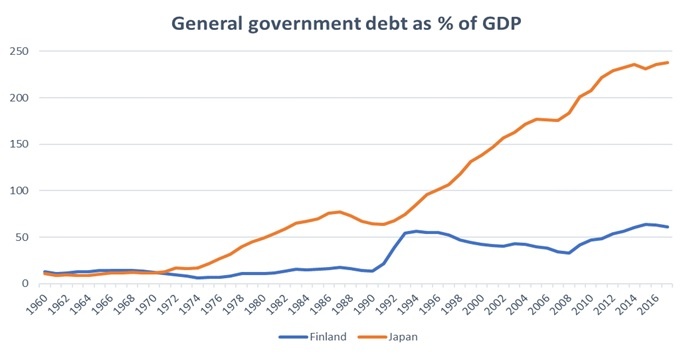 So, after a similar crash and onset of financial crisis, the histories of Finland and Japan diverge. While Japan decided to save all its banks, and many corporations, Finland was forced to accept a more difficult, yet ultimately more successful method of “cleansing” its economy.

Economic stability in Japan proved to require both slow economic growth and a steady and remarkably large increase in public debt. Economic stability in Finland delivered a high rate of growth, but demanded change:  large reductions in direct and indirect public support of traditional values and economic approaches.

Of course, the stories do not end there, and in both countries there are strong minority views that the bargain which was struck at the time was too one-sided. For instance, there is no certainty that the Japanese economy can indefinitely support the growth of public debt. Similarly, there is little evidence that the Finnish labor market can evolve sufficiently to permanently avoid the need to devalue—the pattern before the euro.

Still, the comparison of the crisis responses of Finland vs. Japan shows clearly that a rapid recovery from financial crisis requires short-term pain to “cleanse” the economy:  a fast deflation. This must be done in order to avert long-term economic malaise through zombification of the economy:  a slow deflation.

Into the endgame (of the current expansion)

Now with the Fed and the ECB both flirting with the idea of negative rates and further asset purchases, deeper zombification of the global economy is a real risk. While Japan has been able to keep its economy afloat with such measures, the same is unlikely to succeed on a global scale.  This would require even more drastic monetary measures than exist at present.

The fact is that the model of economic governance by central banks, which we economists have cherished for several decades, has failed.  Admitting that fact is, unsurprisingly, proving to be very difficult. With the staff of the Bank of International Settlements being, basically, the only institutional voice of reason (see:  this, this and this) combined with a few distinct and courageous voices from  academia (see:  this and this), dangerous ideas of extended money conjuring, such as  “Modern Monetary Theory” are gaining traction.

We hope that central bankers, and a majority of macroeconomists, change their thinking as soon as possible. We need first to thoroughly understand, and then to heed the lessons of Japan and resolve to accept short-term economic pain in exchange for long-term economic health—like Finland wisely did.

Regardless, the scenarios of the collapse, we outlined in the December issue of our Q-Review, are the only endgames available. Preparation is the key.

previousIt works, until it doesn’t
nextWhere from here?