Almost all economists and the vast majority of the general population erroneously believe that central banks are, basically, indestructible. And most fail to appreciate that central banks are different from normal commercial banks in just two respects: their ability to earn seigniorage revenue, and to distort accounting rules.

With the current level of liabilities central banks hold those may not be enough. We might be closing in the end of the central banking era.

The income structure of a central bank

Central banks earn seigniorage from the difference between the “printing” costs of the legal tender (monetary base) and its nominal value. In a simplified balance sheet of a central bank, money is visible in the liabilities-side, which also holds the government’s bank account (domestic liabilities) and the reserves of commercial banks and net worth. Net worth includes the capital of the central bank and valuation adjustments for changes in the foreign-exchange rate and investments. A central bank’s assets include securities, foreign-exchange reserves (net foreign assets) and loans (to commercial banks).

Losses of a central bank

The central bank can, naturally, also incur a loss. The value of foreign and domestic assets have a significant role in a central bank’s income stream. Usually, losses result from interest obligations, subsidy payments, multiple exchange-rate practices, “guarantee” schemes and unfavorable changes in net asset valuations. With the advent of  QE programs, central banks have made themselves vulnerable mostly to the latter (see the Figure). 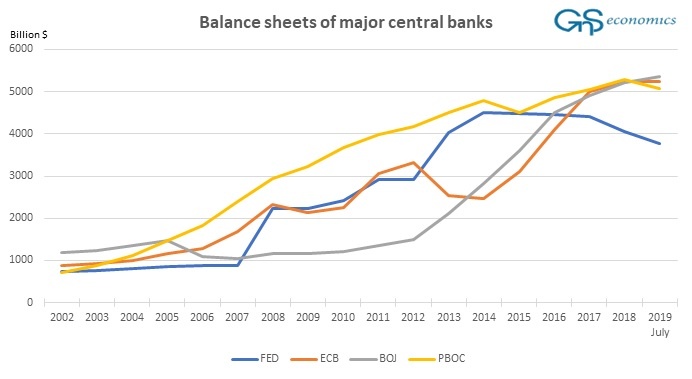 When central bank accrues a loss beyond its stream of net interest rate income (gross interest income minus expenses) and seigniorage, it starts to eat through its capital. A central bank thus follows normal accounting practice. But, because the central bank has a control over the monetary base, it can create demand for its liabilities (currency) by buying government securities and earn seigniorage.

This is the crucial difference between a central bank and a commercial bank. The central bank can claim to be solvent, based on its future income stream from seigniorage, even with negative net worth.

But, covering a large loss from seigniorage will lead to a large growth in its monetary base and thus to very high inflation (see Q-Review 2/2019 for historical examples). So, a central bank can, technically, cover all losses, but it can only be accomplished through very high inflation and, eventually, by destroying the monetary system.

Central bank and the negative net worth

If, alternatively, a central bank continues to operate with negative net worth and/or without acknowledging its losses, it will interfere with its own monetary management (the setting of interest rates) and eventually jeopardize its independence and credibility. What this means as well is that financial market participants cannot be sure whether a central bank is conducting monetary policy according to its mandate or in an effort to cover its losses.

For these reasons, all major modern central banks have rules in place concerning re-capitalization. However, recapitalization is a political decision, which has its own risks and limitations. For example, if losses are very large, the government is unlikely to be willing to cover them, because of the likely political backlash. It can let the central bank fail and start to issue currency by itself or set up a new bank.

Recapitalization of a central bank cannot therefore be considered to be “automatic”, although cases where recapitalization is not undertaken probably require exceptional considerations, such as very large losses, public anger towards central banks, and the political consequences such resentment is likely to produce.

History knows of few examples of the technical bankruptcies of central banks. The Reserve Bank of Zimbabwe reached insolvency in early 2010, due to hyperinflation and accumulated foreign liabilities. The National Bank of Tajikistan fell into insolvency in late 2007 because of its external debt.

In both cases, the liabilities of the central banks exceeded their assets, and a recapitalization was needed. These examples and the process of central bank failure is described in detail an excellent article by W. Buiter. Now, with hugely-bloated balance sheets, central bank losses are almost guaranteed.

People tend to forget that central banks, compared to the economy, are a fairly new invention. They assumed their current role as setters of interest rates only in the 1920s, and became the guardians of inflation in the 1980s. In the 2010s, they became the unwitting destroyers of the pricing mechanism in the capital markets. Their evolutionary path seems clear, and it is very detrimental to the overall economy.

In the case of a recession, their only remaining (effective) stimulus option is some form debt monetization, á la “Modern Monetary Theory”. If enacted, this will signal the end of the monetary system as we know it, but also ensure the end of central bank hegemony because of the inflationary crisis which will ensue.

That’s why we should not be surprised if central banks are not around after the coming crisis has passed. Their pernicious asset buying-programs and negative rates have left them vulnerable politically to any larger shock, such as a crash in the asset markets or a global recession. Venturing into debt monetization would seal their fate.

In either case, a political reckoning for years of reckless central bank policy is fast approaching, and they may not survive what is about to hit.

Buy the “Endgame” -report, where we explain what institutional changes the crisis is likely to bring and what risks they create for investors, fromGnS Store

previousWhere from here?
nextQ-Review 3/2019: The Endgame