A recession is approaching. Almost anywhere in the world one looks, economic indicators are in decline. As we have argued since March 2017, the coming recession will not be “normal”. There are several reasons for this.

The single most important factor is the fragility of the global economy. Low and negative interest rates, asset purchases programs by central banks, as well as the bailouts after the 2008 crisis have created a weak banking sector, asset market bubbles and fostered an unprecedented stagnation in global production growth (see Figure below). 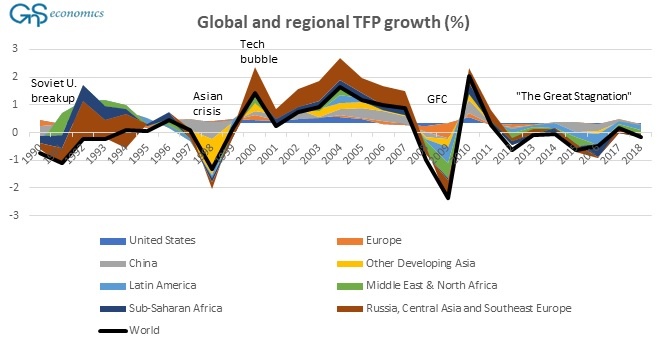 Moreover, the resources remaining to central banks to resuscitate economies in recession are now exhausted. We already know that negative interest rates do not work as intended (see, e.g., this, this and this), but we also know that “helicopter drops” or other money-conjuring and debt-monetization schemes, like MMT, would, most likely, lead to an complete collapse of the monetary system. We believe central banks are out of effective and reasonable options.

A global crisis of never-before-seen proportions is brewing. We have outlined the path of the global economy to this point of crisis in several previous reports (see, e.g., Q-Review 4/2017 and 4/2018) and how investors should prepare for it (see Q-Review 2/2019). However, because of the magnitude of the crisis, it will also cause changes to our current institutions in many ways.

In the Q-Review 3/2019: The Endgame-report, we examine what changes the crisis is likely to bring to many of our most important institutions, including central banks, the Eurozone, and the global banking sector as well as the world’s political structure.

We recommend this report to all, as the changes precipitated by the upcoming crisis are likely to touch every investor, corporation and household.

Buy the annual subscription of Q-Review reports, with access to all older reports, fromour store