The Stage of the Crisis: Counterattack

This article is updated constantly. We recommend to check back periodically. Updated 09/04/2020.

The coronavirus, Covid-19, is a true Black Swan which has thrust the world onto a path to an economic collapse of epic proportions. In this constantly updated blog we will follow the progress of the crisis.

In the December 2018 issue of our Q-Review, we outlined the likely scenarios of an approaching global economic collapse. But, like most things in life, such a dramatic event is unlikely to proceed in a linear fashion. There will be different stages within it.

In December 2019 we outlined these stages, which are likely five: the onset, counter-attack, flood, calamity and recovery. Here, we briefly define the characteristics of each updating them with the recent information.

The Onset of the crisis

In the Q-Review 4/2019 we specified that at the onset, stresses that had been building in the credit markets since the summer of 2019 would explode, shrinking if not eliminating entirely the exits from many parts of that market.

Downgrades of corporate debt in the U.S. and peripheral sovereign debt in the Eurozone would push large fixed-income investors, including pension funds, into higher-rated bonds, which would in turn lead to large-scale selling of lower-rated bonds, forcing wider spreads and even more selling.

This moment came in late February, when a sudden panic gripped investors in both credit and equity markets after a surge in reported Covid-19 deaths and cases in Italy combined with the collapse of OPEC talks.  Stock markets crashed and spreads in the credit markets exploded. A frantic retreat to ‘safe-haven’ assets, including U.S. Treasuries, German Bunds and U.K. Gilts as well as cash and precious metals commenced.

For a brief period of time in mid-March, we were on the brink of a complete financial market meltdown. Then, as we also had envisaged in December, there was a frantic rush on a never-seen-before scale by global and local authorities to rescue the situation.

In December, we envisaged that the second phase of the collapse would be the desperate efforts of authorities to stop the crisis by a counterattack.

We said these were likely to include the restarting and acceleration of QE-programs and other market support programs, gigantic fiscal stimulus, increasing trade protectionism and possibly even calls for direct debt monetization (see Q-Review 3/2019 for an explanation).

These tactics are now in effect in full force. The U.S. government has announced an absurdly enormous stimulus program of $2 trillion—and only the first. Governments all over the world are pushing vast amounts of debt-financed stimulus into their respective economies.

The Fed has now become the financial market as it backstops repo and U.S. Treasury markets, intervenes in corporate commercial-paper and municipal bond markets and short-term money-markets, and buys corporate bond ETFs.  There is not much left of the once-magnificent “free markets” in the U.S.

Gigantic swap-lines between the Fed and European central banks provide additional dollar liquidity to that banking system. The Fed has become the “Central Bank of the World!” As a result, the balance sheet of the Fed has exploded (see Figure 1). 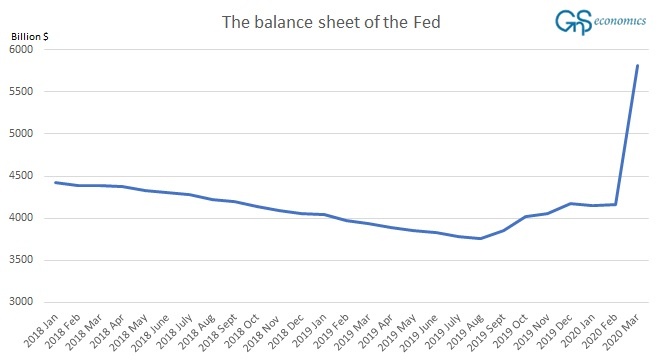 In a historical move, the Bank of England announced that it will begin to finance the short-term needs of the Treasury. While the BoE stated that the debt monetization would be “temporary and short-term”, it will be no such thing. Below, we explain why.

The now occurring socialization of the capital markets is exceptionally worrying. As we noted in Q-Review 4/2019:

It would result in the complete socialization of the capital allocation process. The last time this happened on a systemic scale was in the former Soviet Union, a socialist controlled-economy experiment and global superpower which existed from 1917 till 1990.  The thing to remember with socialist experiments is that they always concentrate power—economic and political—in the elite.

If the desperate efforts of global authorities to uphold the credit and stock markets also succeed, we will still be faced with a flood of corporate bankruptcies.

So-called “zombie” corporations, faced with collapsing global economic demand will start to fail on a scale unseen in decades. Unemployment will skyrocket and tax revenues will collapse. And, at some points, credit markets will crash despite of the massive efforts of central banks.

Next, we detail the Flood -phase in two crucial countries/areas: the Eurozone and China.

If the European banking sector has not ‘cracked’ before, this tsunami of corporate bankruptcies will wash it over the edge. As Europe holds the largest concentration of Global Systemically Important Banks, or G-SIBs, the European banking crisis will “go global” in an instant.

The European leaders are currently engaged in desperate discussions about “corona bonds” and other joint debt schemes. However, political unity has weakened in the Eurozone. There may not be sufficient political will to push through more joint liabilities.

The sudden breakup of the Eurozone has thus become a real possibility. This would crush the European banking sector, which by itself may ignite practically at any time, and neuter the potency of the ECB—as national governments may default on the sovereign debt held by the ECB (see Q-Review 3/2019 for more info).

Utter chaos would erupt in the European sovereign bond markets, which would quickly spread to global capital markets.

Large-scale defaults and bankruptcies caused by the reasons just discussed would hit the Chinese banking sector especially hard. The virus can in this way easily act as a catalyst for a deep and dangerous banking crisis in China. It would guarantee a global depression. 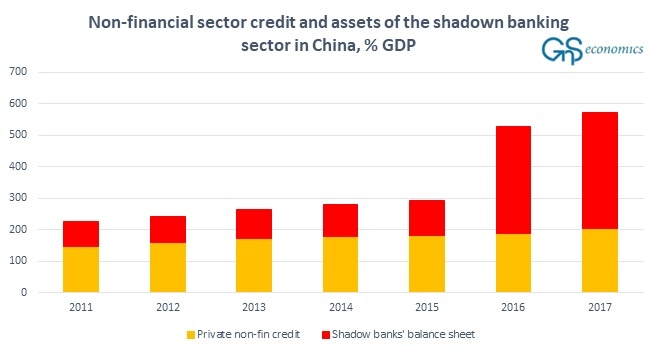 China will desperately try to enact even more fiscal stimulus, but due to the collapse of global economic demand and the probable implosion of the housing and financial system bubbles in China, such attempts will be wholly inadequate.  The Chinese economy will slam to earth in a hard landing.

The value of the holdings of public and private pension funds, charitable endowments, bank trust funds, insurance company general and variable accounts, and stock and bond mutual funds will crash in short order.  Even lowly money-market funds may be at risk, just as they were in the Financial Crisis.

Massive global deflation will initiate, led by an ugly chain of bank and corporate failures. Global liquidity will collapse.

Due to both crashing capital markets and banking sector bankruptcies, joblessness and poverty are likely to explode.  Simultaneously, government tax revenues will collapse as incomes retreat and capital gains evaporate.

Governments will try to save critically-important banks, which will require large-scale funding many countries—such as those in the Eurozone—cannot afford and will not be able to finance in paralyzed capital markets. This economic reality makes depositor bail-ins the only, if politically-unpalatable, option.

Confronted by new and harsh fiscal realities, pensions and other social security programs are likely to face serious cutbacks, by desperate governments. An economic calamity sets in.

Finally, at this point we will know, whether the central bankers are ready to take the final step in their monetary destruction -scheme: the helicopter drops, which can naturally be enacted earlier. They would bring an end to the monetary system as currently know it.

While some will applaud to such extreme move, they don’t usually bother to think its implications through. From Q-Review 4/2019:

Considering that global central banks would underwrite governments and possibly even citizens expenditures hyperinflation would be likely to ignite, at least in some countries. This would erode public faith in fiat currencies and require some heavy-handed tactics to bring it under control.

Economic growth would falter, stagnate—or drop, which is likely to be permanent. Because economic growth is the source of growing income, we would be transformed into a modern version of feudalism, where land-owners and the holders of concentrated capital would rise as the ruling class, as they would hold the one asset class that would yield constant profit, while the middle-class would become extinct.

If the full socialization of our economies and financial markets does not occur, we expect the global depression to last 3-5 years. The initial collapse is likely to be over within three years (2020-2022).

Thus, the path to recovery will depend crucially on how far the ‘cleansing’ of the economy, markets and financial sector is allowed to go. If the banking sector implodes completely, the economic deficit will naturally be made much deeper leading to a systemic crisis.

However, debt monetization, Modern Monetary Theory (“MMT”), helicopter drops and other money-conjuring schemes would corrupt the economy further making a sustained recovery impossible (see more from Q-Review 4/2019). This, unfortunately, is the path we currently are on.

After the Fed launched its desperate repo-market bailout operations in September and October of last year, stresses in the credit markets eased-up and stock markets rallied.

Following the coronavirus outbreak, junk bond yield-spreads shot-up. They were first tamed by massive support operations launched by major central banks, but have refused to come down (see Figure 1).

This cannot last for very long before the ‘zombified’ junk rated companies start to fail. It would mark the beginning of the “flood-stage”. 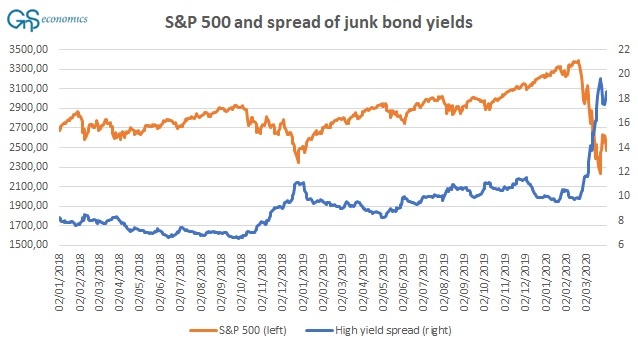 Now, as the virus and lockdowns have spread to Europe and the U.S., events are moving rapidly. The Eurozone is teetering on the edge of collapse. If it were to unravel, complete mayhem would be unleashed on the global capital markets.

Moreover, the weak banking sector of Europe is unlikely to be able to cope with the recession that has now arrived (see Q-Review 4/2019 for a detailed explanation). And, if and when the European banking sector goes, so does the global banking sector, as explained above.

So, we are now waiting whether the Eurozone crumbles or not. In any case we are heading towards the Flood, which is likely to commence by summer. And, when it does, we have an one-way ticket to the bottom.

Learn how to prepare for the economic collapse: Buy the Prepper’s Bunker: Coronavirus Update -report for €114. Buy Now

Purchase the annual subscription of Q-Reviews (4 issues) including access to all previous reports for €329. See the terms and conditions. Buy Now

We monitor the path of the crisis closely in our Deprcon -service, which includes event-related alerts on developments threatening the markets. The one-year subscription of the service is available for 354€. Order Now

previousCoronavirus and the world economy
nextQ-Review 1/2020: Estimating the economic impact of the coronavirus