The economic end scenarios of the Covid-19 pandemic

Since we first warned about the dire impact of the coronavirus outbreak in late January, things have deteriorated alarmingly at an astonishing speed. Our “Black Swan” report, published on the 9th of March, laid out bleak economic prospects going forward, but within a week even those proved to be too optimistic.

A month later, 2nd of April, we updated our global growth forecasts, and stated that the Covid-19 virus is a “Pillager of the World” as it annihilates economic activity globally in modern, prosperous societies. We regret to report that the economic picture has only gotten worse since.

Although it may be hard for some to believe due to the rally in American stock markets, we are heading to an economic crisis of biblical proportions. Just as we warned in early April, we are only at the early stages of the global economic crisis ignited by the coronavirus pandemic.

Now we must account for the possibility of further waves of the Covid-19 infection. This is something that, among others, leading experts in China have been warning about.

In this Special Issue of our Q-Review series, we take on the unpleasant task of analyzing how badly any possible second or third waves of the pandemic would affect the global economy.

We summarize our the economic end scenarios in this blog. The full report is available from our store.

What has been largely marginalized in all economic projections of the coronavirus pandemic are the effects of an emerging financial crisis.

When one looks at the current horrific economic numbers, one cannot escape the reality that banks will suffer massive losses. This is especially troublesome for European banks as they have been in dire straits since 2008. Their situation has deteriorated even more since then due to the misguided policies of the ECB.

A stress test of the ECB, published in October, showed that half of the biggest banks in the Eurozone would not survive if financial counterparties and some commercial clients pulled their money out. This is, of course, exactly what happens in a recession—which has now arrived.

The economic effects of the pandemic and lockdowns will hit the corporate sector hard across the globe. As we explained in Q-Review 1/2019, the world economy contains a large concentration of so-called ‘zombie corporations’. The term is used to describe a firm that is unable to cover debt expenses from its available income stream. Zombie corporations survive only because weak banks provide cheap credit lines to keep them from failing.

Now, when global demand collapses because of the impact of the coronavirus and lockdowns, these corporations will be unable to maintain operations. They—as well as many “non-zombie” corporations—will fail due to collapsing income flows driven by imploding consumer demand and production. In December 2019 we named this stage of the global economic crisis “The Flood”. When it occurs these weak banks will start failing, leading Europe and then the rest of the world into financial crisis. We are currently very close to this point.

So, in the “bad” scenario we assume that the European banking crisis emerges by summer or fall at the latest. As we have mentioned numerous times, it will go global in an instant due to the high concentration of global systemically important banks, G-SIBs, in Europe. This will again crash global asset markets and push the world economy into a depression.

We also assume that there is only a mild second wave and/or treatments for the illness caused by Covid-19 have improved, and its economic impact is limited.

In the “good” scenario, we get the pandemic under control by late May. We establish a breakthrough in virus treatment and we have an efficient vaccine by winter. The virus slowly diminishes and becomes something that resembles a seasonal flu.

The world economy dodges the bullet but emerges itself as a centrally controlled, socialistic “zombie” afflicted by recurring periods of regional and/or national hyperinflations.

When looking for the worst possible outcome for the current outbreak, there is just one option: the pandemic of 1918-1919, known as the “Spanish Flu”. So, we estimate the economic outcomes of the “apocalyptic” scenario based on the historical progress of the Spanish Flu following recent modeling by CIDRAP.

In the “apocalyptic” scenario, we assume that the devastating flood of corporate bankruptcies commences in May. This leads to bank runs and to a banking crisis, starting from Europe by summer. Alas, there is no real recovery in the global economy.

And then the second wave of the Covid-19 pandemic strikes.  The virus starts to spread rapidly around the world during the fall of 2020 and continuing into the winter, with a possible third wave erupting in the spring of 2021.

Countries across the world are forced to reinstate broad and draconian lockdowns. Supply-chains break down completely and global logistics routes are disrupted by huge numbers of sick (or frightened) employees and the strict closures of both factories and national borders. Nations start to protect vulnerable industries and resources. Food security becomes the main national security issue. Global food transfers are halted or disrupted.

These grim factors, combined with soaring unemployment, business failures and market turmoil topple the global banking sector. Bank losses are so large that though depositor bail-ins are enacted, they are insufficient to keep banks from failing. The European banking sector collapses completely, followed by an implosion of the global financial order. Global commerce evaporates. The world succumbs to utter economic annihilation.

It’s rather self-explanatory that the resulting medium-term economic outcomes of the aforementioned economic end scenarios range from “mere” stagnation to a complete collapse of the global economic order.

It is utterly impossible to forecast, with any reliable margin, how the course of virus evolves in coming months, but we need to be prepared for the most dire scenarios. The massive blow delivered to the global economy by Covid-19 is already apparent in the leading indicators of the OECD. 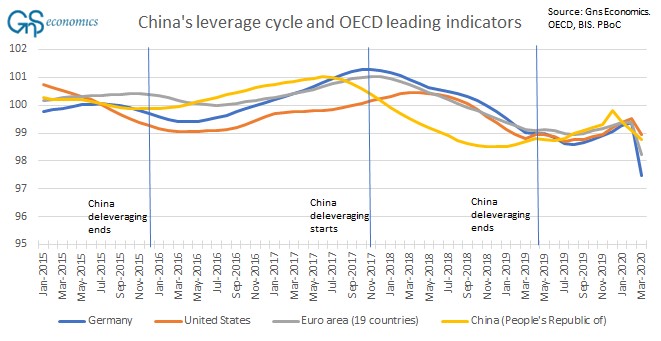 Figure. Leading indicators of the OECD for China, euro area, Germany and the US, and the leverage/deleverage cycle of China. Source: GnS Economics, OECD, BIS, PBoC

Also, the IMF has already warned about the negative economic effects of a possible second wave. However, we note that they did not fully account for a probable global banking crisis, and that the second wave of the pandemic can be even more dangerous than the first.

It is imperative that  governments be prepared for a collapse of both global supply-chains and economic co-operation and order.

Countries need to be prepared for surviving on their own for at least the fall and winter months of 2020. This means immediately addressing the issue of food security, ensuring that each country has adequate domestic food production or reserves.

Investors must be prepared for extreme events in financial markets and unrecognizable—even lunatic–monetary responses from central bankers. We have outlined appropriate hedging strategies for investors and businesses in “The Prepper’s Bunker: Coronavirus Update II” report.

We are faced by a great unknown. In the worst case, we could see the repetition of “apocalyptic” occurrences not seen in 100 years.  But even if we are spared that outcome, the economic crisis is likely to be severe.  Regardless, we must survive it and see through to better times on the other side.

Crises always provide the opportunity to modify and improve economies and societies. How well we succeed, and how fast we recover, will be determined by our response to the pandemic and the social and economic challenges created in its wake.

Or how to prepare for the ongoing crisis, order “The Prepper’s Bunker: Coronavirus update II“.