One thing missing from basically all economic analyses of the coronavirus pandemic is the impact of a European banking crisis. We have been warning about the weakness of the European banking sector since June 2015. At that point we identified non-performing loans, or the “NPLs” of European banks as the most pressing threat.

However, since then two things have occurred. Member nations have successfully lowered the share of bad loans held by banks, but at the same time the profitability of the European banking sector has been decimated by the ill-advised policies of the ECB.

Most worryingly, after the financial crash of 2008, the Financial Accounting Standards Board (“FASB”) in the U.S. relaxed the rules bank could apply to value assets that were not traded publicly (so-called over-the-counter, or “OTC” products). In Europe this was fully embraced by allowing banks to hide the toxic (worthless) assets on their balance sheets and pretend that they had real value.

Alas, the combination of weak profitability, catastrophic policy mistakes and creative accounting has rendered the European banking sector extremely fragile, and it now confronts the massive economic impact of the coronavirus pandemic.

When the financial crisis hit in full force in 2008, many of the European banks hung on the brink of collapse. The solution European leaders chose was an insufficient financial re-capitalization and reliance on accounting gimmicks.

Only a few banks were allowed to fail and, in total, 114 European banks received government support during the crisis. But, the most destructive policy was for banking regulators to allow Europe’s banks to continue to carry U.S. mortgage-backed CDOs and other exotic—yet nearly worthless—financial products on their balance sheets with imaginary values. This meant, of course, that while many of the OTC products had little or no value, banks could pretend that they did.

This policy approach created the “rotten heart” of European banking system, and it also made the true riskiness of the banks nearly impossible to assess. When the French and German banks were re-capitalized through the agony of Greece’s financial crisis during 2010 – 2012, these issues were left untouched, again.

Then came the Outright Monetary Transactions (“OMT”) program, negative interests rates and Q.E. All these hampered the profitability of European banks further, but also facilitated the flow of cheap credit into Europe’s corporations, creating “zombie companies” (see the Destruction of the European banking sector for more info).

However, not all banking policies applied in the Europe have been detrimental. Banks have successfully lowered the share of non-performing loans with the help of national and EU authorities from their peak in 2014-2015 (see Figure 1).

This has been achieved mostly through improving risk management practices and strengthening of the provision of NPLs, but also by selling NPLs to investors. 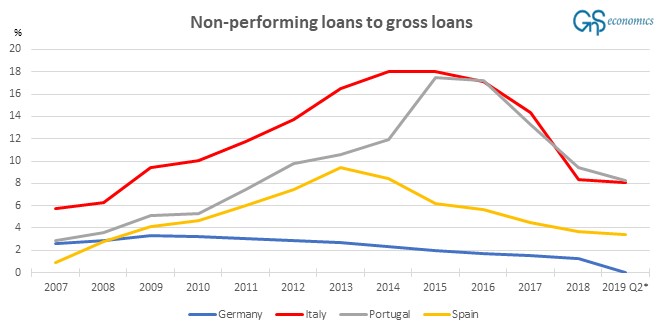 Yet, at the end of Q2 2019 (the latest data available), NPLs were still considerably above the pre-GFC levels in all three major crisis countries: Italy, Spain and Portugal.

The coronavirus pandemic has hit Italy and Spain especially hard. With the summer tourist season likely to be nothing short of catastrophic, the economic effects of the pandemic will keep on building. Moreover, household debt service costs-to-income shares were still very high even before the viral outbreak (see Figure 2). 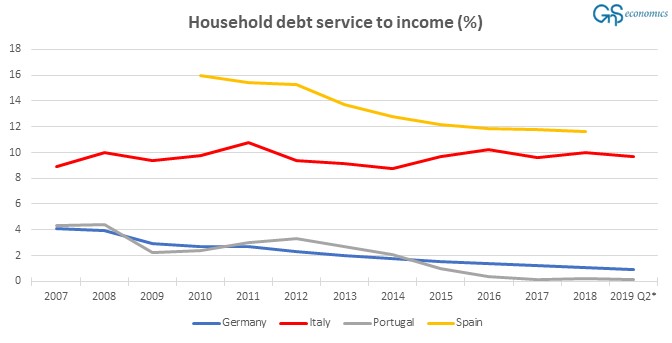 And, while the total debt-to-equity share of non-financial corporations has drifted down in Spain and Portugal, it’s still considerably higher than the pre-GFC level in Italy (see Figure 3). 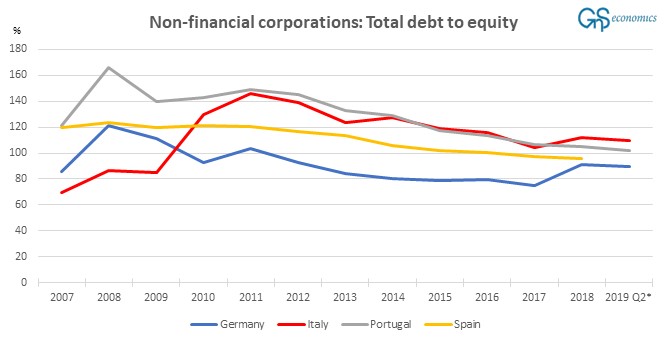 Considering all this, Italy is the likely ignition point of the European banking crisis.

“Run for the hills!”

Many consider the relative high capital (Tier 1, etc.) ratios of European banks as a proof of their resilience. However, they are forgetting that such capital is often in the form of government bonds, and that the prices of sovereign bonds are clearly in a bubble in the Eurozone, especially in the crisis countries.

Moreover, if the decision by German’s Constitutional Court forces the ECB to stop the Pandemic Emergency Purchase Program, and the Public Sector Purchase Program, which is clearly within the realm of possibility, the prices of bonds of the crisis countries will crash (yields skyrocket).

This would be a ‘double-whammy’ for the Eurozone.

The crisis countries would be pushed to euro-exits and defaults, while their banks would fall into insolvency. If European leaders are able to agree on the ‘bailout Fund’ currently under negotiation, such euro-exits could be postponed. However, the banking crisis will come, regardless.

Banks in Europe are strong only in an alternative reality. In real life, an unknown but likely large amount of unprofitable assets burden their balance sheets, their profitability is weak, they still have a large share of NPLs, and their customer base is under extreme financial stress—especially in Italy and Spain. These are the building blocks of a banking crisis, which can ignite basically at any moment.

When the European banking crisis commences, it will go global in an instant as Europe holds the largest concentration of global, systemically important banks, or G-SIBs. And, there are very few places to hide.

Learn how to prepare for the ongoing crisis. Order “The Prepper’s Bunker: Coronavirus update II“.

Purchase the annual subscription of Q-Reviews (4 issues) including access to all previous reports for €329. Order the Annual Subscription from our store. Subscribe Now

We monitor the path of the crisis closely in our Deprcon -service. The one-year subscription of the service is available for 354€ from our store. Subscribe Now