Euro, markka and the exports of Finland

There has been a lively debate on the effect of national currencies on the economic performance of the members of the Eurozone. In 2012, we published a report, where we simulated the potential development of the export of Finland, if we had remained in our own currency, markka. Now we have updated those simulations.

Our updated simulations draw a very straight-forward picture. According to them, our export would have been more than 40 percent higher in Q1 2020, if we had remained in markka.

But how did we end up with such a figure?

The background of the simulations

The idea is to construct a statistical simulation model that gives the theoretical values of Finnish markka against euro during the period that Finland has been a member of the Eurozone. Combining these simulated values of markka with other relevant macroeconomic variables we constructed a simulation model which indicates the potential value of the export of Finland during the period in question.

The following assumptions are made to simulate the value of markka after 1999:

Since Finland is a small country, we think that the first and second exogeneity assumption are realistic. It should be noted that this assumption would not be realistic in terms of bigger euro zone countries such as Germany. This restricts the usefulness of our counter-factual analysis in terms of the other members.

Third assumption states that we assume that the economic development of Finland would have been the same until the end of 1998 whether she had joined or not joined the euro. We consider this to be a plausible because the Finnish economy and government finances were in a robust state before joining (no alterations were needed).

Our analysis is fundamentally based on the exchange rate between the currency of Sweden, krona, and euro. A historical fact is that the exchange rate between markka and krona followed each other quite strictly several decades until markka was connected to the EMU on the 1st of January 1999. We can thus safely assume that this would have continued if we had not joined euro.

The starting point for our simulations is to ponder the rate of interest that Finland would have faced if she had not joined euro.  The integration of the world has led to converge of the yields of the long-term government bonds, especially within the EU.

Thus, there is no particular reason to assume that the interest rate of Finland would have systematically been different from that of Sweden or the interest rate within the euro zone.  However, we expose the simulated interest rate to stochastic components such as the average interest rate in Finland is ten basis points higher than in Sweden (or in the Eurozone). 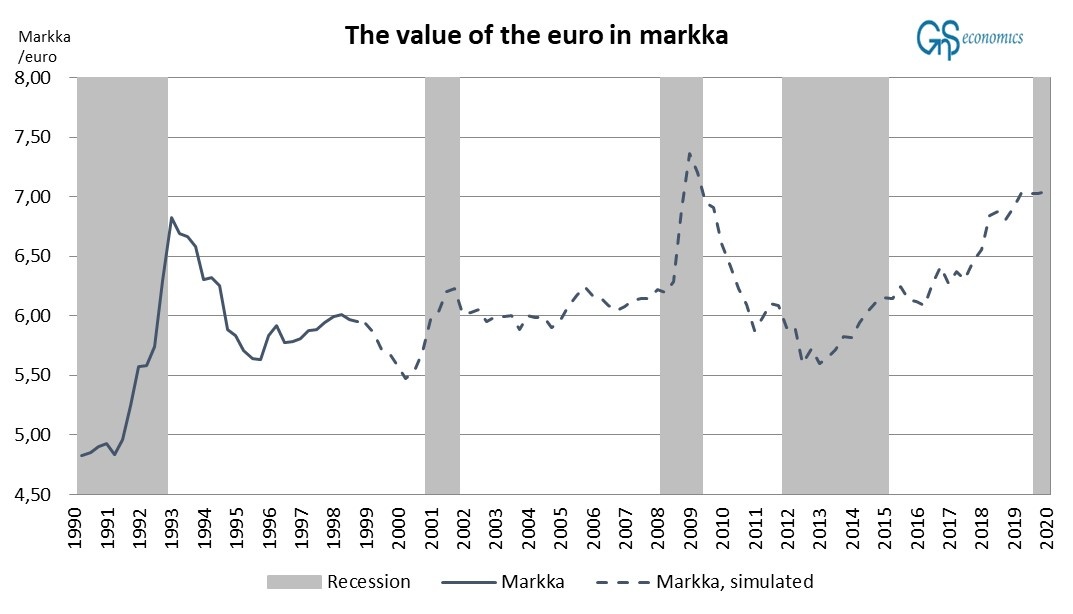 The simulation model for the export of Finland will consist of the history of the export in Finland, the partly realized and theoretical exchange rate between euro and markka, as well as of economic activity, GDP growth rates, of the U.S. and in the Eurozone.

As expected, according to the estimation results of the statistical model behind the simulations, a depreciation of the (simulated) markka-euro exchange rate and increasing economic activity in the world economy increased the export of Finland, and vice versa. Figure 2 presents the results of the simulation. 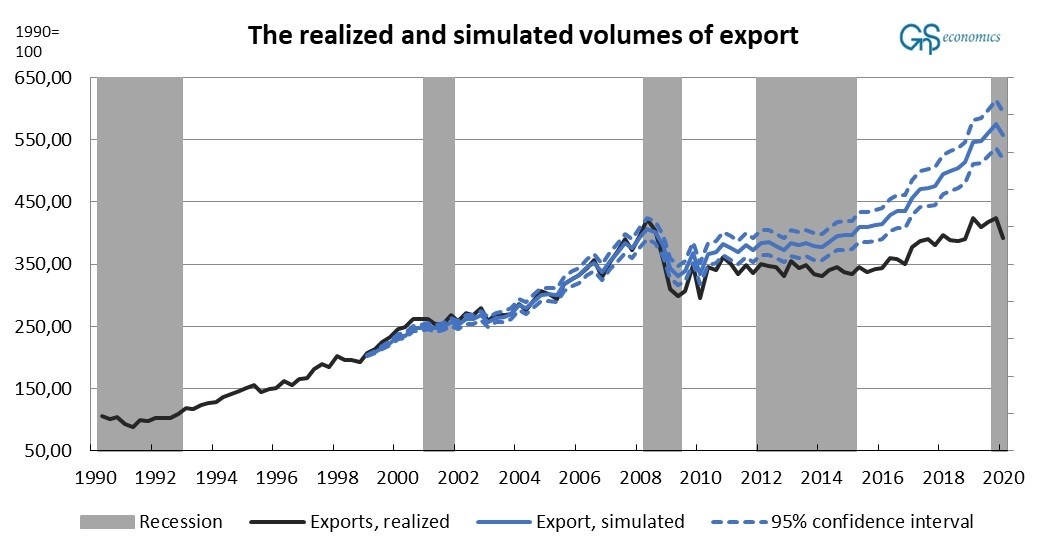 Figure 2. The realized and simulated values of the volume indexes of the export in Finland. Source: GnS Economics, Statistics Finland

According to our simulations, having her own currency would have helped the export of Finland to recover from the GFC and also from the long recession of 2012-2015. Moreover, the depreciation of the markka, combined with the strong growth of the world economy in 2016-2018, would have pushed our exports to new heights. At the Q1 2020, if we had remained in markka, our exports would have been more than 40 percent higher than what they are now.

The economy of Finland seems to suffer in the euro

While we, as a firm, do not take any political sides on the matter, our simulations leave no reason for doubt. The euro-membership has probably been very costly to Finland. She may have lost tens of billions worth of export-revenue, which would have contributed very positively on her economic growth, employment and well-being of citizens.

It is almost certain that Finland is not alone in her suffering in the Eurozone. Several countries, including Greece and Italy, have seen their economic fortunes to dwindle or collapse during their euro-membership.

A special report detailing the “end-game” of the Eurozone.

A special report on how the Eurozone breaks.