The coronavirus has delivered a devastating blow to a fragile global economy. Most analysts, politicians and economists still seem to be in denial about the severity of the economic crisis we are facing. But they are slowly awakening.

This crisis has been brewing for some time. We contend that the onset of the crisis occurred on 16 September, 2019, when the “repo”-markets ‘blew up’.

Ever since, the Fed in particular has been engaged in a losing fight to avert the collapse of the global financial bubble which the Fed and other major central banks themselves helped to create. The economic impact on the real economy, delivered by the coronavirus, is almost certain to bring it all crashing down.

This is the fifth report in our Crisis Preparation series. In this issue, we will concentrate on explaining what kind of crisis we will eventually face and how to survive it. We provide guidance for investors, households, and enterprises, but also for governments.

But, what kind of a crisis will we be facing?

Figure 1 is familiar to all our followers and subscribers. It presents the growth of total factor productivity, TFP, which is the growth in gross domestic product not explained by increases in labor quantity, quality and capital services. It should not, in any circumstances, be in decline during an economic expansion. We have proposed explanations for this several times (see:  Twitter-thread), and most comprehensively in March 2019. 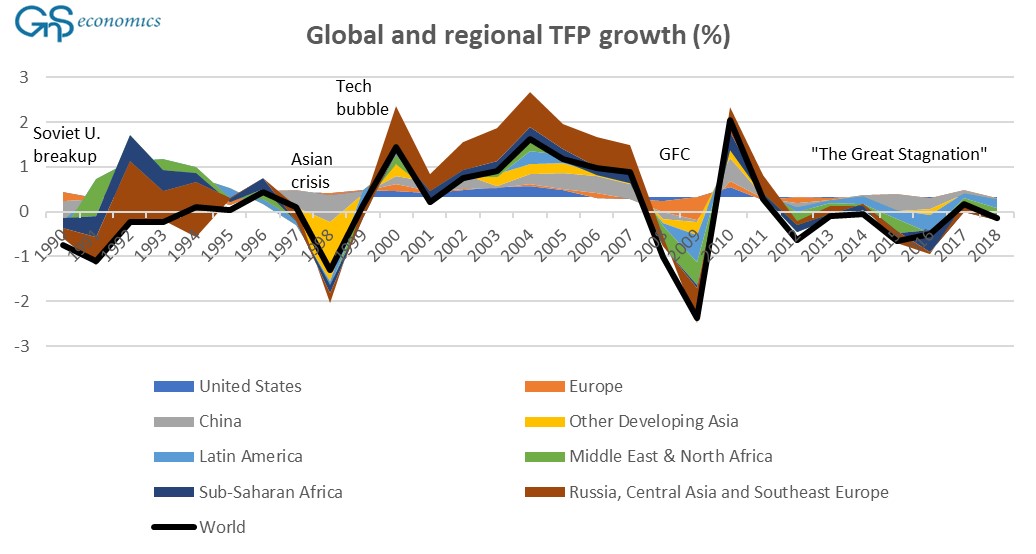 We have been tracking the unsustainability of China’s economic growth, post-2009, since 2017. China has been driving this business cycle, as it has accounted for over 50 percent of capital investments in large industrialized nations and over 60 percent new money (credit) created globally after 2009. Now, however, China is at the end of the road, as her economy has become plagued by unprofitable investments and a massive debt load (see Figure 2). 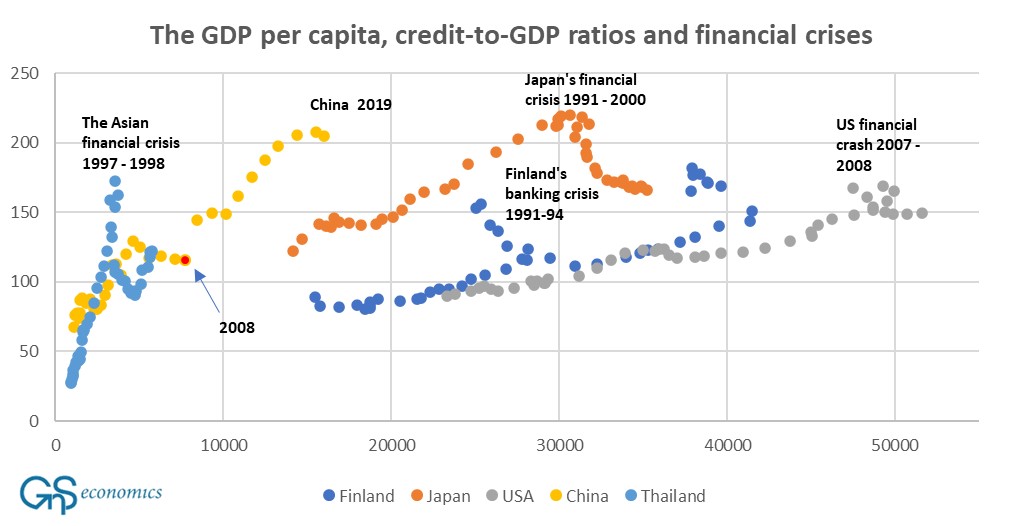 Figure 2. The GDP per capita, share of non-financial private sector debt to GDP and the onset of financial crises. Source: GnS Economics, BIS

We have also been issuing warnings regarding the state of the European banking sector for years. It has been under-capitalized to the extent that it is now “fictionally capitalized”.

The deleterious impact of the coronavirus pandemic on the economies with the most fragile banking sectors, Italy and Spain, is very likely to set in motion an European banking crisis, which will become a global issue due to the high concentration of G-SIBs, or global systemically important banks, in Europe.

What this all means is that we will, most likely, soon face a financial crisis of epic proportions.

The U.S. financial markets are currently in a bubble. Valuations are very close to historic extremes (see also this). Leverage in the U.S. financial system has been steadily building over the years, driven in large part by the policies of the Fed.

Low interest rates, quantitative easing, and now the near-complete expropriation of the U.S. capital markets have been feeding the leverage-frenzy across the U.S financial asset universe. When interest rates in the repo-markets exploded in mid-September 2019, this was a conclusive sign that the system could no longer cope with the build-up of leverage and hidden risks.

The Fed was able to avoid collapse then, and again in March 2020, but the cost was the near- socialization of the capital markets of the U.S. However, what the Fed cannot fix is the real economy, which will keep deteriorating beneath the surface of the frothy asset markets.

We are in a crisis already

In December 2019, we envisaged the five stages of the coming crisis: Onset, Counterattack, Flood, Calamity and Recovery. As mentioned above, we believe that the Onset occurred 16 September, 2019, and the Counterattack began in March of 2020.

In mid-June, we find ourselves in an interim between the Counterattack and the Flood. Many are slowly awaking to the fact that the economy will not see a V-shaped recovery—just as we have been warning.

There is still some time to prepare, but soon enough the focus will shift to survival. Our report will help you to do both. Brace for impact!

Read more on what kind of crisis we will eventually face and how to survive it.

previousEuro, markka and the exports of Finland
nextNew podcasts