The Fed and the looming capital market meltdown

The Federal Reserve system made a future financial panic or currency panic impossible. It made stable for the first time in the history of the United States the credit system of the people of the United States. – Senate Documents, 64th Cong., 1st Sess., December 6, 1916

We have been watching the “shock-and-awe” bailout of the financial system by the Federal Reserve with astonishment.  Never before has a central bank tried single-handedly to rescue both the financial system and a large proportion of U.S. corporations. We were taken aback then by Fed actions and are now just as worried about what it has given birth to.

We are unfortunately now in a situation where we cannot speak of “markets” anymore. The Fed has nurtured a dangerous, centrally controlled financial system, á la the Soviet Union. Like its ‘role model’, monolithic systems always fail, as the complexity of financial interactions and the economy will eventually overwhelm the central planners.

Alas, we fear that we are approaching the breaking point of the modern financial order.

After the collapse of banks of the families Peruzzi and Bardi in 1343 and 1346 (the first financial crisis of the Middle Ages), a discussion about a ‘liquidity back-stop’ of the banking system began. The idea of the modern central bank emerged.

For the same reasons, the ‘Panic of 1907’ was a game-changer in an attempt to create a central bank in the US. To put a stop to the bank runs, a coalition led by the illustrious banker J.P. Morgan repeatedly intervened to restore the solvency of several New York banks, which in turn gave more impetus to demands that the U.S. banking system required a permanent institutional source of liquidity.

However, the creation of the Federal Reserve system, in 1913, was beset by worries that it would lead to the “socialization” of the economy. To calm these fears, the authority of the Fed to issue legal tender (or “currency”) was restricted by both the ‘real bills doctrine’ and the distribution of financial power.

The regional Reserve Banks, not the Federal Reserve Board, were given the control of the creation of central bank credit or money. The real bills doctrine stated that the Fed could only extend credit and thus increase the supply of money against collateral that already had established value through a “commercial transaction”. This meant that the value of the collateral could not be in the future, effectively banning, for example, the monetization of the federal debt.

The real bills doctrine slowly faded away in the 1920s and the Banking Act of 1935 ended the autonomy of the Reserve Banks, and the Board received authority over open-market operations. In practice, by the 1920s the Fed had already assumed a larger role in the economy than its creators had intended.

A crash in high leverage

Since its inception, the Fed has consistently increased its role in the economy by manipulating the financial markets.

When the repurchase agreements (or “repo”) market blew up on the 16th of September, 2019, it sent a strong message. Leverage and risk-taking, supported by decades of recurrent—or nearly permanent—easy monetary policy and meddling of the Fed, had reached a tipping point. On the morning of the 16th, the big ‘Primary Dealer’ banks simply refused to provide overnight loans in the repo-market, and rates shot up.

The Fed naturally intervened by enacting a repo facility, which it had previously used in the depths of the Global Financial Crisis. So, emergency measures were needed again. This naturally did not solve the problem of excess leverage and risk-taking in the financial markets, but rather the contrary. With the help of the Fed, the system was kept afloat, but leverage likely kept rising until economic anxiety precipitated by fear of the coronavirus pandemic struck in March 2020.

The collapse, and the bailout

On March 16th the rates on U.S. short-term bonds, which cities and states often rely on for their short-term financing needs, shot up. Liquidity and buyers evaporated from several key parts of the capital markets, including U.S. corporate fixed-income and eventually parts of the Treasury markets, and panic ensued.

Stock markets crashed. The volatility index, VIX, reached 82.69, the highest on record. The DJIA plunged by 2997 points, the worst point-drop on record, or 12.9 percent.

These measures stemmed the fall—but at an extreme price. In the end, the Fed ended-up backstopping U.S. Treasury markets, corporate commercial-paper and municipal bond markets and short-term money-markets. It effectively became the financial markets of the US.

Those who had feared that the creation of the Fed would eventually lead to the “socialization” of the economy were proven correct.

It is a fact derived from financial history that, eventually, financial markets follow the real economy. With its ‘whatever-it-takes’ policy line, the Fed has temporarily suspended the action of this iron economic rule. For example, at the same time that U.S. corporate bankruptcies are above the peak seen during the GFC, the average yield of ‘junk bonds’ has collapsed. Of course, this does not make any sense! 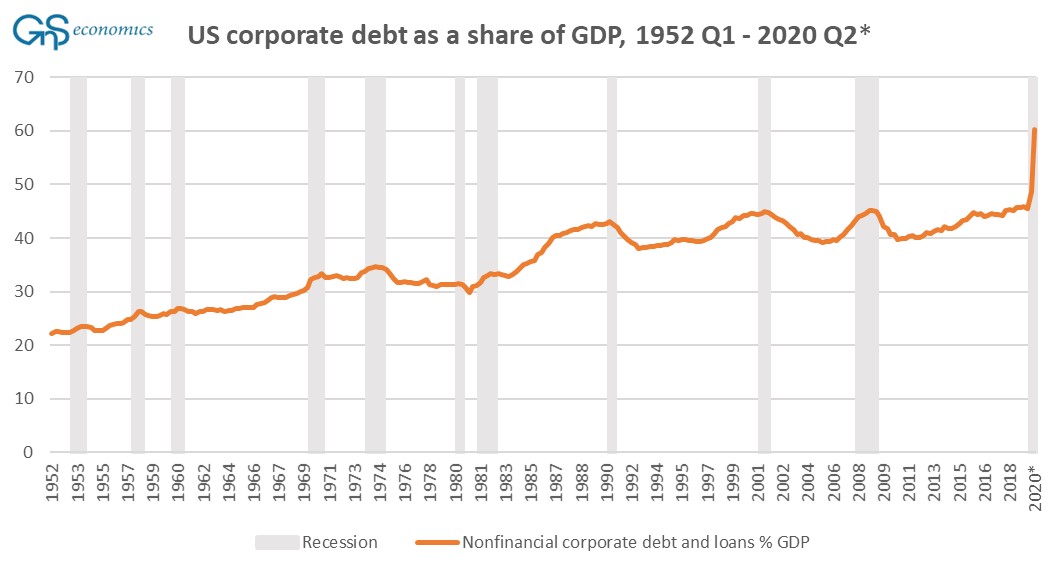 Figure. The share of debt and loans of US corporations as a share of GDP. 2020 Q2 figure is an estimate. Source: GnS Economics, St. Louis Fed, BoFA

This is against the backdrop of an economy which is unlikely to heal anytime soon.

The record level of corporate bankruptcies means that unemployment will not decline from extreme heights and may even revert to a rising trend. This will diminish consumption, which will hurt the profitability of corporations, and lead to growing loan defaults. This in turn will increase stress in the banking sector. Credit will diminish, consumption will fall further leading to more bankruptcies, and the cycle repeats.

Current high-frequency data shows that the U.S. economic activity is still languishing some 60 % below “normal” pre-Covid levels and that growth rates are flattening, or even declining again in some major economies.

Regrettably, we appear to be in just the first innings of this crisis.

The combination of massive central bank meddling in a suffering economy creates an extremely precarious situation for the capital markets.

The looming meltdown of the capital markets

Leverage among corporations is at an all-time high and yet they continue maniacally piling-up debt while the economy sputters. This means that mass-defaults loom, and that over-indebted corporations will be unable to invest and grow. The latter will cripple the crucial driver of economic recovery.

What this means is that losses from corporate and household defaults and bankruptcies will mount until a point is reached where trust between over-levered investors is lost, and the banking sector implodes. Then an attempted mass-exodus from all risky debt will commence through “doors” which will by that time have quickly become extremely small. Liquidity will evaporate and the capital markets will likely face a meltdown driven by investor panic and an emerging banking crisis.

While the Fed can, in theory, buy practically every distressed financial asset and become the new Gosbank while simultaneously subjecting itself and the hapless U.S. taxpayer to gargantuan losses, it will be unable stop the banking crisis. Even more so, as the most likely point of origin of the new financial crisis lies in Europe.

There simply just is no way the Fed can win this fight. The contraction of the real economy will continue while markets keep pushing blindly to new highs. This has always been a recipe for a catastrophic asset market meltdown, and this time it is likely to engulf the capital markets in their entirety.

Learn how to survive from the coming meltdown of the capital markets with the help of our Crisis Preparation -series.

We follow the development of the economic crisis our Q-Review reports and Deprcon Service, which are available at GnS Store

previousThe anatomy of a financial crisis
nextThere is no recovery