There is no recovery

We have been watching, with disbelief and bemusement, how the “recovery-narrative” has been touted in the financial media and among some economists and analysts.

Categorically, an economic recovery is a period of expansion, where we eventually exceed the previous peak in employment and output. There’s no such thing coming (anytime soon).

It is very human to avoid acknowledging disturbing possibilities, such as the looming economic abyss the world economy is about to sink into, but now we absolutely need to perceive coldly the economic realities as they are. Otherwise, the effects of the approaching turmoil will be unbearable.

To help people and firms to think their way through the crisis, we summarize here the convincing counterarguments against this over-optimistic—and, in some cases even deceitful—recovery-narrative.

Probably the biggest misunderstanding in the recovery-narrative is the misinterpretation concerning diffusion indexes like the purchasing managers indexes, or PMIs.

IHS Markit describes the PMI as:

“For each variable, the index is the sum of the percentage of ‘higher’ responses and half the percentage of ‘no change’ responses. The PMI is a weighted average of the following five indices: New Orders (30%), Output (25%), Employment (20%), Suppliers’ Delivery Times (15%) and Stocks of Purchases (10%).”

All figures above 50 signal overall increase compared to previous month, while figures below 50 signal a decrease.

Now, during the lockdowns, PMIs crashed to range of 20 to 40, signalling a massive decrease in expectations and production. Now, the PMIs are mostly in a range from 50 to 60. What does all this imply?

The easiest way is to consider PMIs in terms of percentage changes. So, when index dives to 30, it signals a decrease of (roughly) 40 percent. How long does it take for the underlying series (production, sales, new orders, etc.) to recover to the level it was at before the decline?

Moreover, in the case of the PMIs (manufacturing and/or services) that are increasing, these are implying growth rates of 3 to 10 percent. So, even in the best-case we would be around six months away from an actual recovery, and serious doubts can be cast on the assumption that this growth rate can be sustained.

The so-called high-frequency indicators, which measure economic activity on a weekly basis, indicate that we have reached only around 60% to 80% of pre-Covid economic activity. Moreover, they have stabilized or even turned back down recently. This indicates that PMIs are likely to first stabilize around 50, and then turn back below 50 in the coming months.

If we look at the key economic indicators in the most important regions of the world, they also signal non-recovery in major economies.

The non-recovery of the US

The consumer is the most important driver of the U.S. economy (private consumption accounts for close to 70% of U.S. GDP), and the biggest contributor to that is employment. Private employment crashed during the spring and it has since recovered only marginally. Its growth rate has stalled (see Figure 1). 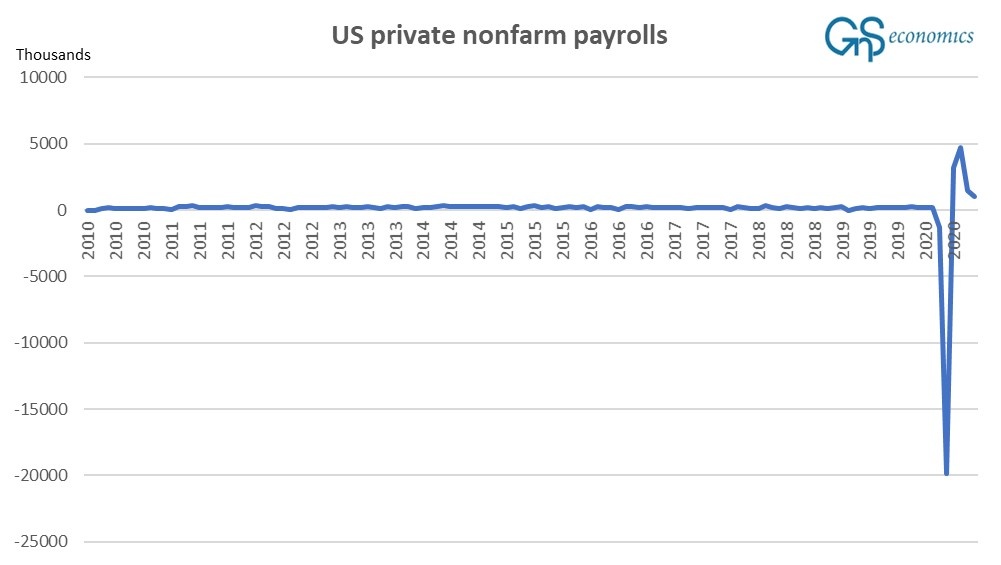 Figure 1. Private nonfarm monthly payrolls in the US from January 2010 to August 2020. Source: GnS Economics, ADP

The non-recovery of China and the Eurozone

Industrial production is still the backbone of the Chinese economy, although the role of the consumer has grown.

Industrial production in China quite expectedly crashed in January and February of this year, and we have not observed any bounce powerful enough to return it to pre-Corona levels quickly (see Figure 2).  With the current growth rate of 4-5%, it would take until around Christmas for the industrial production to reach the level where it was before the pandemic (in December 2019). And there are also serious doubts as to whether China can keep such a rapid growth pace up.

Retail sales have not recovered as expected, and in fact they actually declined (YoY) in July. Serious questions can also be entertained about a continuation of the Chinese recovery due to escalating problems in its over-levered banking sector. 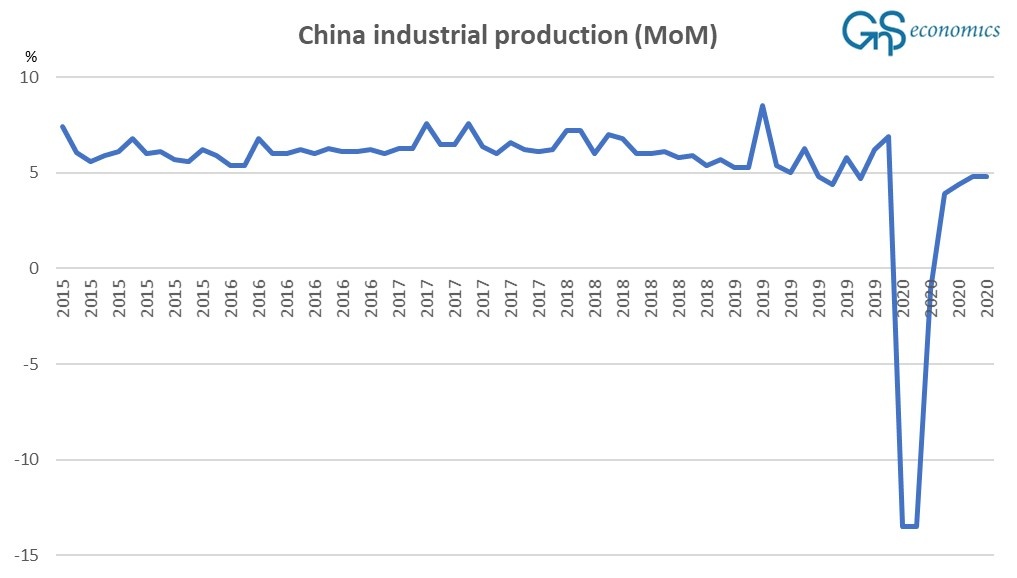 The Eurozone is the true ‘problem-child’ in the global recovery-narrative. It already succumbed to recession in Q4 2019 (see our recession warning from March). There are also very few signs of an actual recovery in the currency bloc, reflected, for example, in collapsed industrial sentiment, which has not recovered (see Figure 3). This does not bode well for the fragile European banking sector. 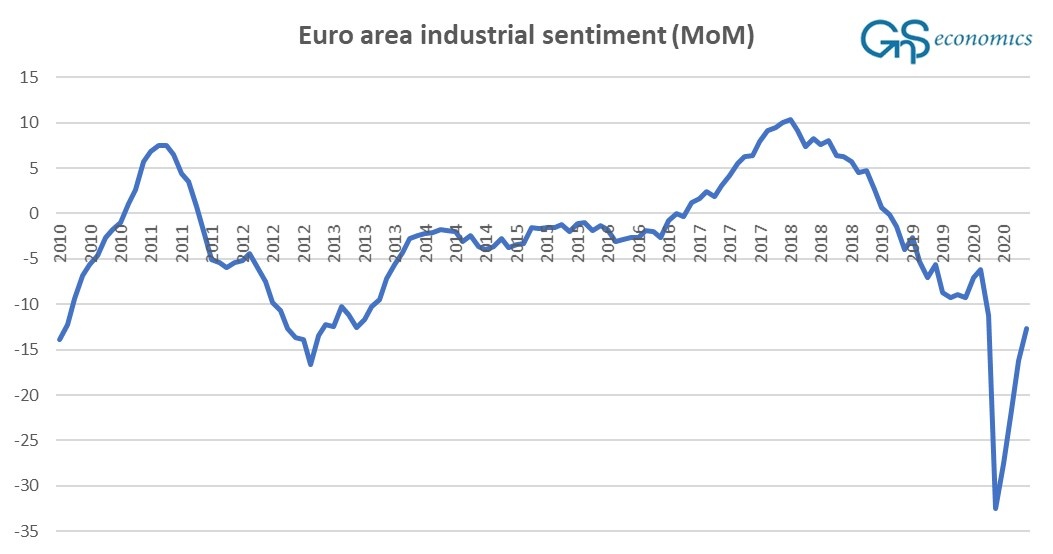 Figure 3. The change in the industrial output of the Eurozone (percent) from January 2010 till August 2020. Source: GnS Economics, Trading Economics

Failure of (yet more) stimulus

The third issue overlooked in the recovery-narrative is that whatever lacklustre recovery there is has only been achieved by truly colossal levels of fiscal and monetary stimulus.

The U.S. government has flooded over $2 trillion into the economy and the budget deficit is expected to top $3.3 trillion in 2020, the largest deficit as a percentage of GDP since 1945. The balance sheet of the Federal Reserve has also exploded from little over $4 trillion to over $7 trillion in just a few months (see Figure 4). There is just one word for such unprecedented actions: desperation. 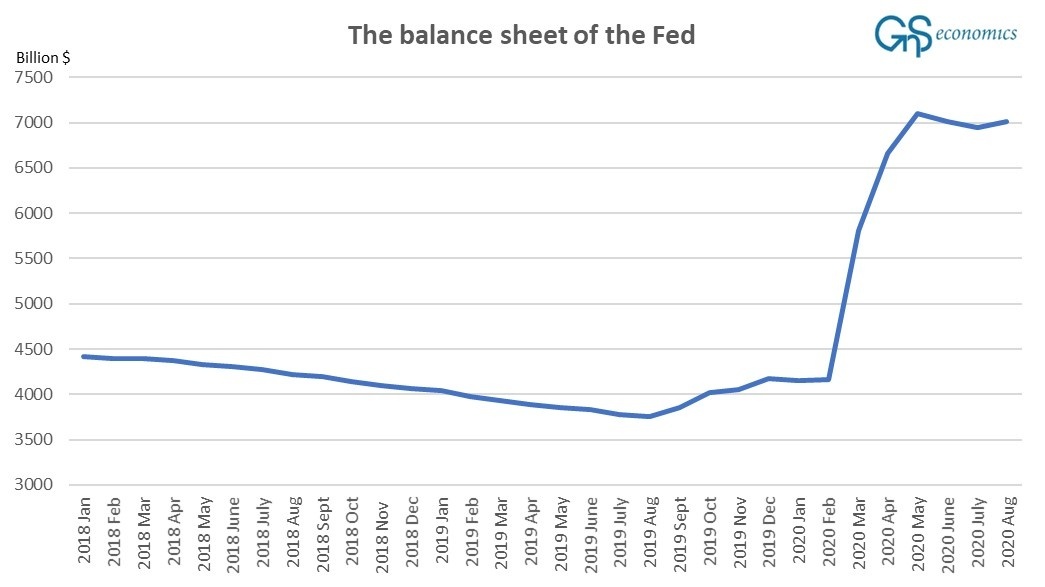 Stimulus in China has also broken records. By the end of July,’ the aggregate financing to the real economy’ had reached an astonishing $3.3 trillion, easily topping the previous record of $2 trillion set in 2019. In an economy that is already extremely indebted, this is, naturally, completely unsustainable.

There is, quite simply, no real economic recovery coming. On the contrary, we are heading deeper into the crisis.

We are bound to collapse

The lacklustre recovery from the massive economic impact of the coronavirus pandemic has been achieved with excessive fiscal and monetary stimulus in the most manipulated business cycle in modern history.

Moreover, the global business cycle was already very extended (record-breaking in the U.S.) and was in the process of rolling over. Central bankers and political leaders are effectively patching holes in a ship with whose decks are awash.

Business cycles are called cycles obviously because any economy proceeds through periods of both expansion and contraction.  We have known this since Ancient Rome. Economic expansions always, always end.

However, the history of economic crises has also taught us that if a business cycle is artificially extended through monetary stimulation leading to excessive financial speculation, exactly as we are now experiencing, the risk of a catastrophic economic collapse is greatly increased. Alas, due to the ill-advised policies of central banks and political leaders, we are now bound to witness just such an event.

And it may turn out to be the worst economic crisis anyone has ever seen.

Learn how to survive from the coming crisis with the help of our Crisis Preparation -series.

We follow the development of the economic crisis our Q-Review reports and Deprcon Service, which are available at GnS Store

previousThe Fed and the looming capital market meltdown
nextAre we heading to another ’Great Crash’ (of 1929)?