In 1929, the S&P 500 reached its highest value on the 3rd of September. From there on the index slowly drifted downwards, before abruptly collapsing 29 percent between Thursday the 24th and Tuesday the 29th. The latter become known as ‘Black Tuesday’, and on that day the DJIA fell by 11 percent.

Could we be in a time-loop, heading into another massive stock market crash?

We have already detailed the prerequisites and details of the 1929 stock market collapse in our April 2018 blog. In this entry, we take a tour of the similarities between the circumstances surrounding the ‘Great Crash’ then and the stock market of today.

The end of the ‘Roaring Twenties’

Towards the end of the 1920s, there was a common belief that earnings and dividends would continue to grow rapidly because of the systematic application of science to industry, the development of modern management technologies, and the efficiency of business mergers. This was certainly not the last time this kind of thinking dominated.

In 1929, the stock market kept on rising and the economic boom continued, but the Fed was becoming ever-more nervous about the level of speculation and about the flow of funds into the market—especially high-octane “margin” loans, with far greater leverage permitted than today—from corporations and individuals to feed it. The Fed was worried, but it was unable to stop the frenzy of speculation. The higher rates it set, in fact, actually encouraged funds to be made available to stock market speculation from non-bank sources.

The first hints of a slowing economy appeared in July 1929, when the index of industrial production of the Fed dropped (at the time there were, for example, no quarterly earnings reports). From then on, several other indices, including steel production and freight-car loads, started falling. The mix of bad news and rising interest rates foretold an upcoming recession, and in early September the markets started to drift downwards.

“Margin calls”—where the value of the stock held using borrowed money had declined to a point where it was no longer sufficient collateral—became more frequent. And then, on the 24th October, 1929, the markets crashed.

As we have argued since 2017, the current economic expansion is the most distorted in modern history. It has endured through a combination of massive central bank support of the financial markets and equally massive support of the world economy by the wholly unsustainable debt-stimulus of China.

Figure 1 demonstrates the influence of China’s debt-stimulus on the Eurozone, Germany and the U.S. In March of this year, China’s debt-stimulus went into overdrive. At the end of August, China’s ‘aggregate financing of the economy’ stood at 75% of the total for full-year 2019, which marked the previous record. 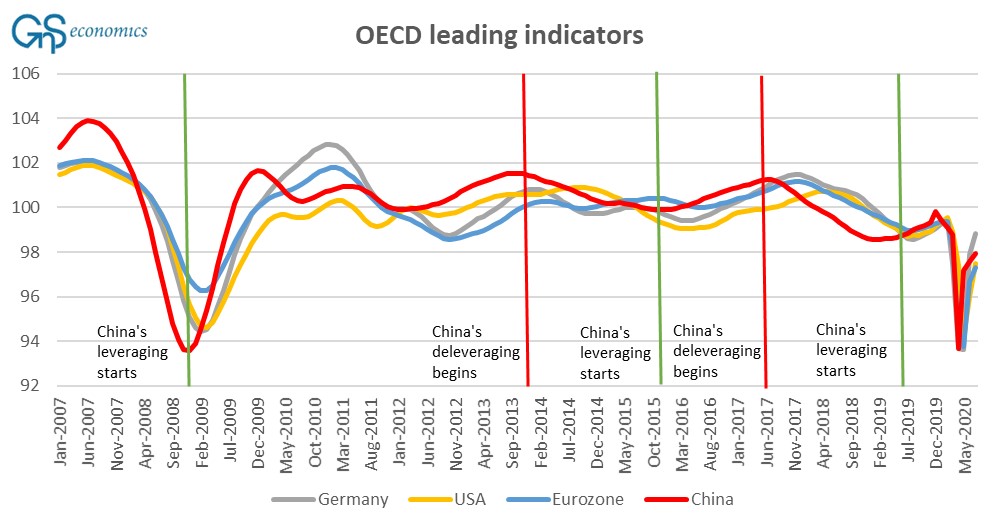 Figure 1. The leading indicators of the OECD and leveraging and de-leveraging cycle of China. Source: GnS Economics, OECD, PBoC

The combined balance sheet of global central banks has also been thundering “into orbit” since March (see Figure 2), gorging on government debt, and now corporate debt, which has super-inflated the central bank-induced bond market bubble. 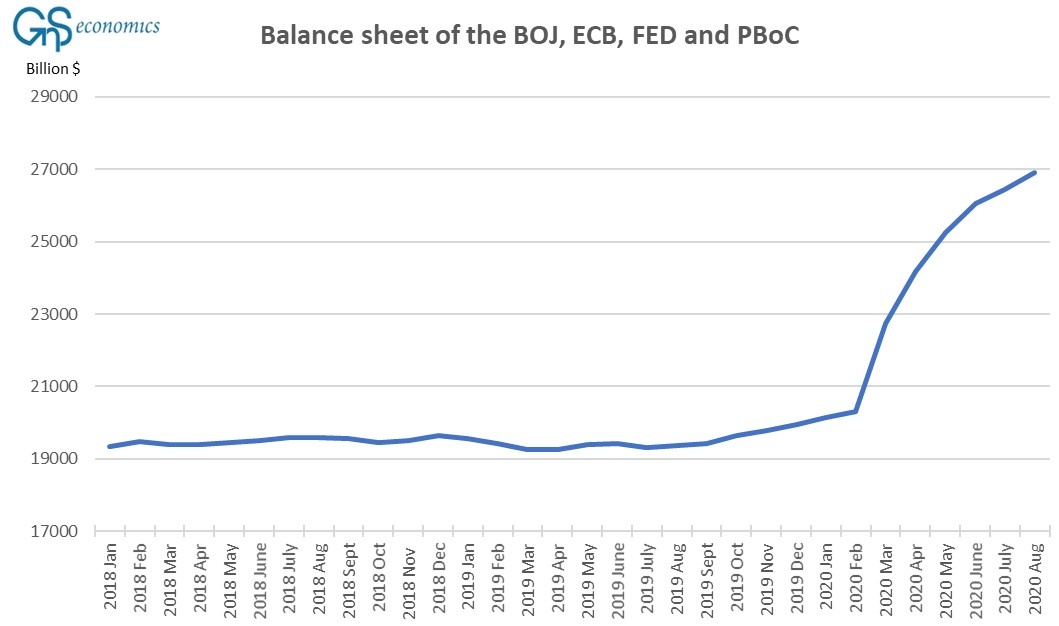 The Eurozone fell into recession in Q4 2019. The peak of the U.S. business cycle was observed in February 2020, but economic growth had already faltered in late 2019. Moreover, in June 2019, the US expansion became the longest ever.

The coronavirus pandemic made sure that we will never know whether China’s re-leveraging, enacted in mid-2019 and greatly increased by late 2019, would have revigorated an already-zombified global economy one last time.

The massive economic blow delivered by global lockdowns pummelled U.S. GDP by -9.5% (Q-to-Q) and the Eurozone GDP by a stunning -12 percent. An aged business cycle, which has been artificially extended by continuous stimulus alone, simply cannot be revived after such a drop.

The fragility of the global financial sector

All this meddling with the economy has come at a fearsome cost.

The growth in productivity of the world economy has stagnated for the first time ever, outside of periods of recession or crisis (see Figure 3). Effectively, through their desperate and misbegotten policies, China and global central banks have inadvertently ‘zombified’ the global economy. 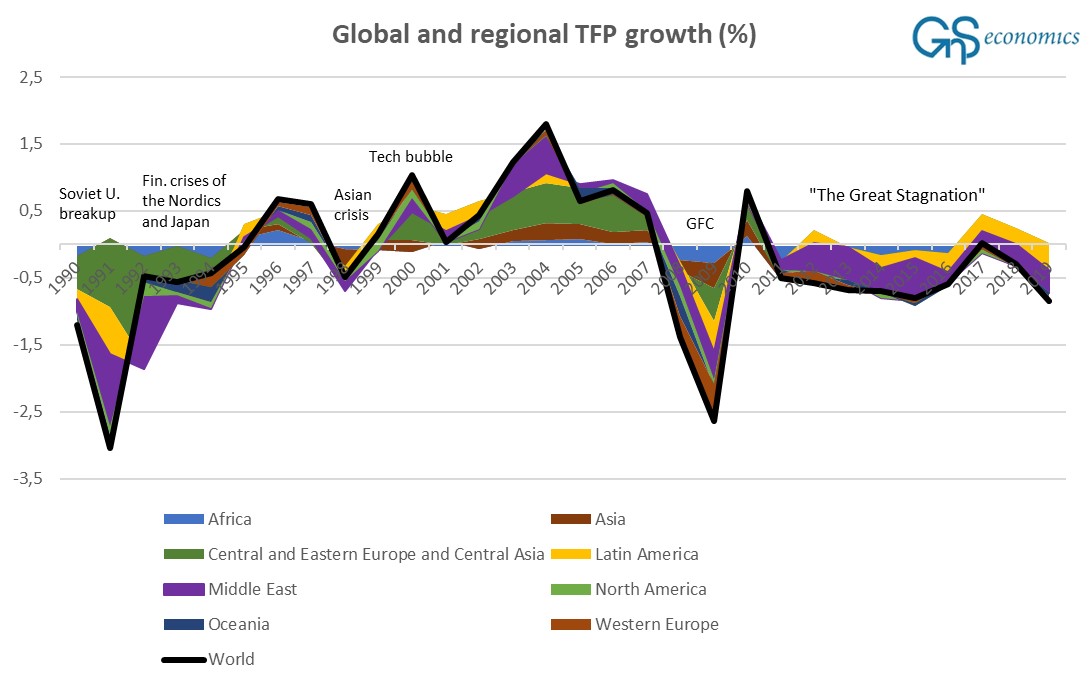 Figure 3. The regional and global growth of the total factor productivity (in %). Source: GnS Economics, Conference Board

The major lesson of the ‘Great Crash’ of 1929 was that long credit booms, followed by excessive gains and the formation of bubbles in asset markets also results in a fragile economy, which can implode suddenly with catastrophic consequences. Leverage, such as buying “on margin”, can lead to cascading losses when the economy and markets sour and market participants simultaneously head for the exits. Then, the bottom simply falls out from under the market.

Astronomical fiscal stimulus by global governments, running in the trillions of U.S. dollars this year alone, has contributed to serious distortions in the capital markets, amplified by “momentum-chasing” investors who, en masse, have produced hyper-valued and brittle  financial markets.

Lastly, the  corporate debt ‘bonanza’, witnessed across the globe, but especially in the U.S., foretells an even bigger wave of defaults, even as the room for stimulus through the corporate sector has been completely dissipated.

Between March and June this year, the Fed ended-up backstopping U.S. Treasury markets, corporate commercial-paper, municipal bond markets, and short-term money-markets. It effectively became the financial markets of the U.S. And now the Fed is trying to slowly withdraw its support, just like it did prior to the 1929 crash.

The repetition of the ‘Great Crash’ looms

Needless to say, when we consider the circumstances leading up to the 1929 crash and the current situation, worrying similarities emerge.

Both rallies were fed by easy credit that flowed from the central banks both directly, through lower rates and/or asset purchase programs, and indirectly by levering-up financial market institutions and corporations fed by easy credit. In 1929, like now, the Fed first massively supported the boom in financial assets and then tried to slowly and quietly withdraw its support.

Most notably, the stock market frenzy leading to a climax in 1929 ended, and the ensuing crash occurred, precisely when investors realized that a recession was about to strike an overheated stock market.  This is exactly where we stand now.

The false recovery-narrative was enthusiastically sold to investors during the summer. Now, the cruel realization has started to dawn that no true recovery is coming. For example, some 29 million Americans still receive unemployment benefits and large-corporation bankruptcies continue at record-levels. The American consumer simply will not come back during this cycle, and the second wave of the coronavirus pandemic seems almost unavoidable. The recession will continue, and then worsen.

Alas, the repetition of the ‘Great Crash’ of the 1929 is a real possibility and the ‘trigger’ may have already been pulled.

The historical accounts are based on the “The Great Crash 1929“ by John K. Galbraith, “The stock market boom and crash of 1929 revisited” by Eugene White.

Learn how investors, households and corporations can survive from the coming financial market collapse and the global economic crisis with the help of our Crisis Preparation -series.

Learn how the global economic crisis develops through our Q-Review reports and Deprcon Service, which are available at GnS Store

previousThere is no recovery
nextThe scenarios of the collapse: 2020 update