The scenarios of the collapse: 2020 update

In December 2018, we first published the scenarios which described how the global economic crisis would likely proceed. While we detailed the likely paths, we also warned that means were still available to postpone the onset of the crisis.

And we were proven right—global central banks and Chinese authorities have been very innovative and energetic in unprecedented efforts to postpone the crisis.

In our September Q-Review, we updated our scenarios. Now they are called: the Crash, the Reset and the Great Inflation. In this entry, we will briefly summarize them.

The Crash scenario envisages a crash in the financial markets.

We currently consider the most likely points of origin for the global economic collapse to be the U.S. stock and credit markets, and the European banking sector.

Frothy valuation levels in the U.S. junk bond market (see the Figure), and the fact that yields there have declined despite a record-breaking pace of corporate bankruptcies and a recession makes them prone to a crash. 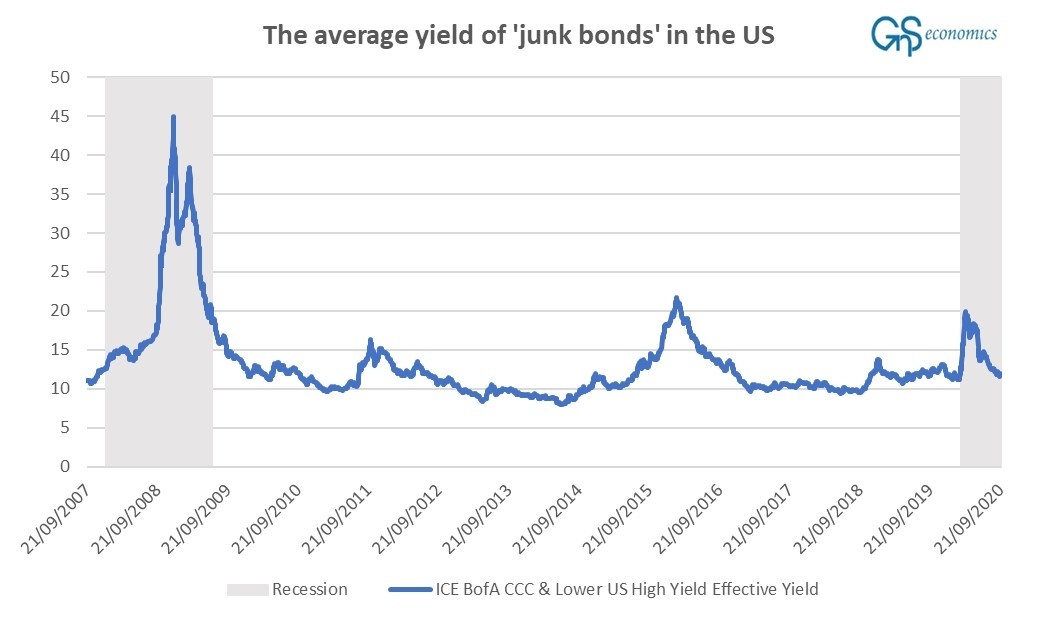 The record level of corporate bankruptcies means that unemployment is unlikely to decline in a meaningful way and may even revert to a rising trend (see, e.g, this). This will diminish consumption, which will hurt the profitability of corporations, and lead to growing loan defaults. This in turn will increase stress in the banking sector. Credit will diminish, consumption will fall further leading to more bankruptcies, and the deflationary cycle repeats.

Resulting losses from corporate and household defaults and bankruptcies will mount until a point is reached where trust between over-levered investors is lost. Then an attempted mass-exodus from all risky debt and financial assets will commence through exits which seemingly overnight will have become very small. Algos will withdraw from the market, ETFs and passive investment funds will be forced to mechanically liquidate, the CLO market will fall into disarray, and shadow banks and hedge funds will instantly and aggressively initiate defensive strategies.

Liquidity will evaporate and the capital markets will face a meltdown driven by investor panic and an emerging banking crisis, which is likely to emanate from  Europe as we have been warning for over a year (see, e.g. this and this).

After the Crash occurs, everything depends on the banking system. If it collapses, there will be nothing to prevent the whole financial system from caving-in, leading us into the Reset scenario.

Not many realize that we came extremely close to such a scenario in mid-October 2008. Mistrust in the banking sector was so high that there was a genuine fear that one day the banks would simply not open their doors. However, the massive bank bailout packages agreed to by the G-7 leaders over a weekend in mid-October 2008 saved the day. A systemic meltdown was averted.

A banking crisis will spread mistrust throughout the financial markets, as well as restricting liquidity, as banks pull credit lines from both corporations and market participants leading to widespread margin calls.

A cessation of practically all financial market activity results. Trading simply stops in many parts of the capital markets. As assets will become illiquid, a tsunami of defaults by investors and borrowers is likely to overwhelm both commercial and shadow banking sectors. The global financial architecture collapses.

It is actually rather difficult to imagine a situation where majority of financial assets will abruptly lose most, if not all value, but that is in fact what the Reset implies. That is, a re-denomination—a Reset of practically all financial assets.

How do contemporary governments, terrified by crisis and the prospect of political instability, stop both the collapse of financial markets and the real economy?

What would be required is never-before-seen central bank action. The Federal Reserve and other central banks would need to buy not just government bonds (as they have already in QE) but the majority of the universe of financial risk assets, which is estimated to top 400 trillion U.S. dollars. Moreover, central banks would need to provide practically limitless fiscal support for governments to sustain or even increase their consumption and investment activities.

In this scenario, the balance sheets of major central banks would turn into investment vehicles with limitless boundaries. Central bankers would decide which corporations—even countries!—would survive. They would effectively metastasize into Gosbanks (the central bank of the now-defunct Soviet Union) of the world.

The socialized economy would be likely to behave very differently than the current (partially socialized) one. We would effectively step into a some form a fascism (the union of corporate and government power). This would naturally be to an utter, unrecognizable, global economic dystopia.

With endless central bank printed money pouring into corporations and governments, and governments competing to avoid strong currencies, inflation expectations would assuredly rise, and dramatically. Combined with high levels of corporate bankruptcies, this would create a perfect setup for accelerating inflation or even hyperinflation.

This last one is clearly the worst scenario we can imagine.

The scenarios and central banking

The past 11 years have marked a desperate struggle by the central authorities to keep the fragile economic expansion going. The big lesson from all the central bank meddling is that it breeds ‘moral hazard’ and zombifies the economy.

Central banks were never designed, and probably never intended to impose permanent, extremely low or even negative rates, or to wreck the price mechanism in the capital markets. But that is exactly what they have achieved over the past 25 years.

The original limited aim of central banking was to provide support for financial institutions during times of stress by furnishing liquidity at high rates against good collateral for otherwise-solvent banks. But this purity of purpose did not last long, and Fed bankers ‘hijacked’ the economy in the early 1920’s, when the Fed started to experiment with interest rate manipulation, reserves, and bond purchases. One hundred years later, the Fed is again the reason we are in the present predicament.

While some may consider the “Corona bailout” by central banks and governments as a necessary evil, it pushed the financial markets and the economy into a state of perpetual life-support.  Just imagine what would happen if there were no more fiscal stimulus and if the Fed withdrew its over-reaching support from the capital markets?

If the word “collapse” does not come to mind, take a few minutes to think about it a bit more!

We are at cross-roads.

The economy cannot recover organically without first enduring a severe credit collapse and a profound economic contraction.  The present financial markets are a ‘Ponzi-scheme’ perpetuated by artificial central bank liquidity and the insidious dual investment phenomena of “FOMO” and ‘TINA”.

The European banking sector is not much more than a brittle, fragile zombie, alive only thanks to continuous financial injections and regulatory forbearance. And, the second wave of the coronavirus pandemic seems to be on its way (see our Special report from May).

Only ominous near-term scenarios exist. Either we let the economy implode, or we maintain it on artificial resuscitation, a moribund entity lacking the strength and vigour to support our societies and humanity at large.

People (and economists) should not live in fear of an economic collapse, from which we can recover. They should, however, be mortally afraid of socialism and nationalizations, because they will impose a loss of freedom, loss of sovereignty and, at the end, a real risk of totalitarianism. Eventually such construction would face a catastrophic collapse.

The path is not set in stone. We can still choose.  But we need to do so wisely, as this is a decisive moment. Either we bravely face what we have created (an economic monster), or we succumb to walk a path that will destroy the living standards and freedoms our ancestors worked so hard to build.

We need to face reality, and quickly—time is not on our side.

Stay informed how the global economic crisis proceeds through our Q-Review reports and Deprcon Service, which are available at GnS Store

previousAre we heading to another ’Great Crash’ (of 1929)?
nextThe destruction of the world economy by the Central Banks