The second wave of the Coronavirus is here. What next?

In May, we published a Special Report detailing the potential economic outcomes of the Coronavirus pandemic, based on our scenario modelling. The report was, somewhat ominously, named Apocalypse. Now?

It included three scenarios, which we named the Good, the Bad and the ‘Apocalyptic’. The last one of these included the possibility of a second (and possibly third) wave of the SARS-CoV-2 virus through the fall and winter of 2020-2021.

We based our ‘Apocalyptic’ scenario on modeling by the Center for Infectious Disease Research and Policy (CIDRAP) at the University of Minnesota. Following the lessons of the ‘Spanish Flu’ that prowled the globe in 1918-19, CIDRAP warned that every country needs to be prepared for a second, larger, and possibly more deadly viral wave over this fall and winter, and even for a third wave in 2021.

The so-called “growth” forecast produced by our model in the ‘Apocalyptic’ scenario was mind-numbing. The projected decline in GDP was in the range of tens of percent in the U.S. and the Eurozone. However, we have been, optimistically, following along the lines of the ‘Good’ scenario, in which we assumed massive government and central bank action would stave off the looming financial crisis, at least for now.

But now that the second wave is here, what can we expect?

Bring out the ‘big guns’…

In the May Special Issue of our Q-Review series, we warned that in the case of a bad second wave of the coronavirus pandemic the following scenario could develop:

Countries across the world are forced to reinstate broad and draconian lockdowns. Supply-chains break down completely and global logistics routes are disrupted by huge numbers of sick (or frightened) employees and the strict closures of both factories and national borders. Nations start to protect vulnerable industries and resources. Food security becomes the main national security issue. Global food transfers are halted or disrupted.

This is also our worry now. While the death rates of the second wave of the pandemic seem to be more subdued than in the first wave in some countries, at least for the moment (see, e.g., this and this), countries like France and the Netherlands are enacting ‘draconian’ lockdowns again.

Some countries have already started to hoard food, as prices soar. National sovereignty in food production is likely to become a big issue during the winter. In the worst case, we may even see widespread hunger and rationing in the western world for the first time since the 19th century.

“High-frequency” indicators suggest that most countries have regained only around 60-80% of pre-covid levels of economic activity. Moreover, these same indicators show the U.S. economy gaining traction while Europe’s seems to be in retreat.  With new lockdowns in the heart of Europe, this is unlikely to get better and is obviously very worrying.

… to topple it all

In May, we also warned that:

Especially after the events of last spring, we have repeatedly warned that the European banking sector is teetering on the verge of catastrophic collapse (see, e.g. this and this).  Dramatic actions such as debt moratoriums enacted by governments, the Pandemic Emergency Purchase Program (“PEPP”) enacted by the European Central Bank, and the Pandemic Emergency Longer-Term Refinancing Operations (“PELTRO”) program to support banks have postponed, but not averted the crisis.

The second wave of Covid and the new lockdowns all but guarantee the onset of a European banking crisis, of which possibility Carmen Reinhart, Chief Economist of the World Bank, recently also warned.

The most apprehensive part about the response of global authorities to the shock of the pandemic has been the “massiveness” of it all.

Governments have issued never-before-seen cascades of debt stimulus programs, while the unified balance sheet of the three major central banks headed ‘into orbit’ (see Figure 1). As Dr.  Reinhart notes with considerable understatement:  “this is not sustainable”. 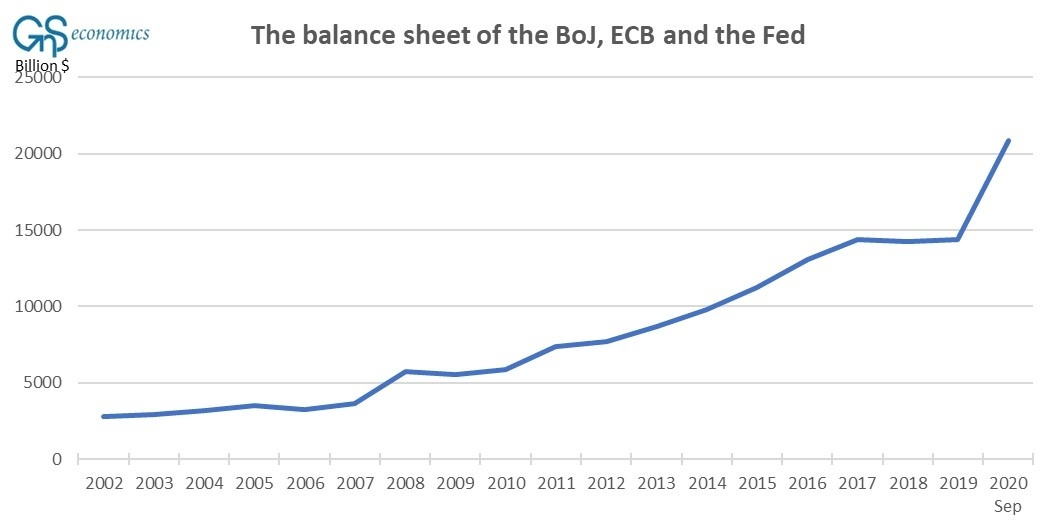 All this meddling in the financial markets and the economy have created unprecedented distortions. The ‘zombification’ of the U.S. economy is growing by the day. Currently, some 15% of U.S. companies with a market cap larger than $300 million are considered “zombies”, with all the financial fragility and economic lassitude the concept implies. We can only guess what the figure is in Europe currently due to the large debt moratoriums still in place—as in Italy, for example.

In the U.S., the “Corona bailout” by the Treasury, backed by the Fed, has left U.S. capital markets in a  state of suspended animation.  Market valuations, in contrast with a weak and slowly recovering economy, are simply staggering.

Most U.S. indices broke to new all-time highs six months after the first wave of Covid-19 pounded the U.S. economy, while yields on junk-rated companies  simultaneously collapsed as Fed action prompted a manic impulse to “buy the dip”(see Figure 2). This makes absolutely no sense, but such behavior illustrates the enormous risks already built into market valuations.

The collapse of junk bond yields in the midst of a deep recession implies a massive misallocation of capital. It also suggests that the Fed, and other central banks have built a “death trap” for both investors and the world economy.

Let us now assume that, for some reason, central banks lose control of the financial markets. What happens?

First, junk-bond and other high-risk asset markets fall into complete disarray. Because buyers will quickly disappear, a massive ‘fire-sale’ will emerge as bond prices melt down. The panic is likely to spread to all corners of the credit markets leading to a broad collapse of the capital markets. While it is likely that the U.S. Treasury market will remain functional, even this cannot be guaranteed.

Second, sovereigns in Europe will come under extreme pressure. The yields on impaired treasury bonds, such as those of the Italian and Spanish governments, would skyrocket, leading to almost certain sovereign default. As many European banks use their own government’s bonds as their collateral, collapsing prices of and defaults on those same bonds would all but annihilate the solvency of the banking sector.

So, capital markets would collapse followed—or preceded—by the collapse of the banking sector. This would mean an utter economic calamity.

There are several ways for central banks to lose control, and for the world economy to “hit the wall”.

First of all, in order to stem a full-on investor panic triggered by some unanticipated ‘shock’ in massively over-bought markets, global central banks will need to “monetize” the majority of the  $400 trillion in global risk-assets. This would be the effective socialization of the world’s financial markets—and we doubt central banks are willing to go this far.

Moreover, central banks could face political ‘backlash’ (an audit, for example) or be crippled by massive losses from their holdings, limiting their ability to acquire more risky assets. Central bank balance sheets are currently exposed to massive risk through sovereign and corporate debt holdings.

And, finally, central banks cannot ‘print away’ the mistrust which a panic makes endemic in the interbank markets. In other words, they cannot stop a banking crisis if the confidence between banks is shattered by, for example, accumulating loan losses or impaired collateral.

With the second wave of coronavirus pandemic crippling economies and banking systems across the globe, those who trust the central banks or governments to save us are on a fool’s errand. Such misplaced trust has brought the western world closer to socialism than ever before, but socialist experiments always fail.

Learn how investors, households and corporations can prepare for the coming economic collapse with the help of our Crisis Preparation -series.

Stay informed how the global economic crisis proceeds through our Q-Review reports and Deprcon Service, which are available at GnS Store