Into the Global Economic Dystopia?

When we first published our scenarios describing global economic collapse in December 2018, one scenario described a drift towards an economic system controlled by central banks. We named the scenario as the “Fairy Tale”, but in all honesty it was a horror story.

In the report, we noted that:

“While avoiding the crisis is very unlikely, central banks still have theoretical stimulus options left even when the crisis hits.”

Such policies are not merely theoretical anymore. In this blog, we will detail the building blocks of the takeover of the global financial system by the central banks, or the Global Economic Dystopia.

But first, we need to acknowledge that we are in a crisis already. The “Flood” of corporate bankruptcies and soaring unemployment have been kept at bay through the combination of massive stimulus and debt moratoria. When they end, the global economic collapse is likely to begin, helped by the second (and a possible third) wave of the coronavirus pandemic.

One question is, when did the crisis actually start? There are two possibilities: the market rout at the turn of 2018/2019 and the near-collapse of the repurchase (“repo”) markets in September 2019.

The ghost of Christmas past

While the balance sheet of the four major central banks (BoJ, ECB, Fed, and PBoC) fell by a meagre €131 billion from July to October (see Figure below), the response of the markets on the other hand was brutal. Selling in the U.S. stock market commenced in October, and while the DJIA rose a little bit by the end of November, an uneasy mood crept into the capital markets. In December the selling accelerated, ending in a rout, and spreading to engulf the credit markets.

On Christmas eve, the DJIA recorded its biggest December decline ever. By early January, credit markets were cascading into panic.

This is what we warned in March 2018: if central banks ever tried to roll-off assets from their balance sheet (in programs dubbed as quantitative tightening), the collapse of the asset markets would follow.

And this is exactly what happened in late 2018.  But then, salvation came.

The PBoC started to inject liquidity into the Chinese banking system in mid-December when tight monetary conditions started to threaten the stability of the system. In January 2019, these injections reached record-breaking levels.

The Fed made a drastic U-turn in its monetary policy on the 4th of January. Just a few weeks before, the FOMC had provided “forward guidance” signaling two to three rate rises and a balance sheet runoff continuing on ‘autopilot’. In early January, Chairman Powell backed down, assuring markets that in fact there was “no preset path” for rate rises and for further adjustments to the balance sheet of the Fed.

This calmed the markets, and the collapse was averted—for a short while.

After the ‘pivot’, the balance sheet runoff of the Fed continued unabated until, on the 16th of September, 2019, panic swept through the U.S. financial system as rates in the “repo” market abruptly skyrocketed.

The $4 trillion repo-market is used by big institutional investors to satisfy their short-term, often “overnight” demand for liquidity. Through the repo, institutional investors are able to obtain funds against good collateral, such as U.S. Treasury bills. If rates in the repo-markets stay elevated for any length of time, highly-leveraged institutions start to fail and trust in financial markets and the banking sector is likely to be compromised. Thus, the Fed was forced to step in to provide liquidity to the markets for the first time since 2009. 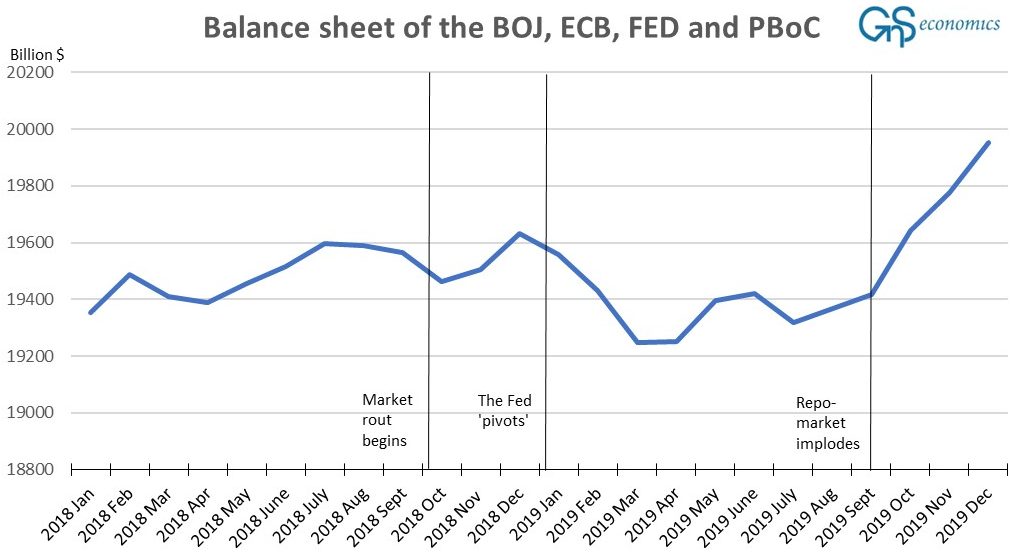 Figure. The combined balance sheet of the BoJ, ECB, Fed and the PBoC, and main market events and the response of the Fed. Source: GnS Economics, BoJ, ECB, Fed, PBoC

We have dwelled quite extensively on the issues leading to the repo-crisis in our blog “Repo-market turmoil: staring into the financial abyss”.

The main point is that the near-collapse of the repo-market was a symptom of a lack of confidence latent in the financial system. Trust is the “glue” in banking and financial systems. If the participants do not trust other to be able to meet their commitments, the system collapses.

We have explained the dynamics of a financial crisis in our recent blog.

The road to (economic) totalitarianism

As mentioned in the introduction, our scenarios have developed various paths to the global crisis but also the course to global economic domination by central banks.

In the September 2020 Q-Review, we noted that in the ‘Great Inflation’ scenario

“[…] the balance sheets of major central banks would turn into investment vehicles with limitless boundaries. Central bankers would decide which countries and corporations would survive. They would effectively metastasize into Gosbanks (the central bank of the now-defunct Soviet Union, responsible for central planning) of the world.”

The Financial Times recently warned about such possible “Gosbankification” of the global economy.

Two things are needed for global economic dominance by the central banks:

The former has been in the making for a while through regulations forcing banks to hold their assets at central banks. The development can be enforced through emerging digital currencies issued by the central banks.

The takeover of the financial system is, technically, much easier. The central bank simply creates funding facilities for corporations and investors through the Primary Dealer banks. This is essentially what the Fed did in March-June of this past year. However, the central bank needs to make sure that banks follow its orders, which may require some coercion.

Free capital markets as a source of well-being

Modern capital markets are around 400 years old. They have played a crucial role in humanity’s rise from poverty and slavery to widespread prosperity and freedom.

Unfortunately, over the past 11 years, and especially during the past year, central banks have essentially undermined modern free markets, by destroying their most essential and fundamental role: price discovery.

When central banks add “artificial” money—money that has no connection to the underlying economic process—into the economy through their asset purchase operations, it just inflates prices. It creates an economic mirage. Alas, recently, they have created a make-believe recovery.

The economic ‘doomsday’ is edging closer

Why are the central banks doing this?

While they claim an altruistic motive about “supporting the economy”, this is simply part of a narrative to soothe the public and burnish the reputation of the economics profession in general and central banking specifically.

It is very likely that central bankers know that they have helped to create intractable problems for which there are no easy, or painless, solutions—quite the contrary.

After the GFC, they were praised as heroes. Some financial journalists and economists essentially gave them the status of “maestros”, and credited them with “Saving the World.”

However, this was, and remains, an extremely dangerous fallacy. They did no such thing.  Their “solutions” only compounded problems and made their inevitable resolution even more difficult and dangerous.

Now, central banks are both hostage to the heavily indebted sovereigns, corporations and banks, whose failure (the “Flood”) would almost instantly collapse the world economy and financial markets, as well as being perceived as their rescuers.  If truly desperate measures are demanded of central banks, these same ham-handed institutions could end up obtaining control of the principal levers of our economic and financial systems.

This could help to create an authoritarian economic regime run by central banks. Free markets would be a thing of the past.  We would all be dealing with a new world, a potentially-horrifying Global Economic Dystopia.

In the December issue of our Q-Review series, as one possible scenario, we delve deeper into what such a system would look like. We also explore what it would mean for corporations, households and investors.