On this ’Black Friday’, it’s good to remember that we are currently surrounded by a flock of emergent “Black Swans”.

To recap, a Black Swan is an improbable, generally unforeseen, yet high-impact event. Such events are usually thought to include earthquakes and other natural disasters, collapses of large buildings and bridges and, in some cases, financial collapses.

In March, we labelled the coronavirus pandemic a Black Swan, notably contrary to the view of the creator of the concept, Nassim Nicholas Taleb. His view is that pandemics are nothing new. He also  warned that the outbreak might, without drastic action, become more widespread, in a paper co-authored with Yaneer Bar-Yam and Joe Norman published on the 26th of January.

However, we considered the pandemic to be an economic Black Swan, in a sense that very few originally understood, due to its potential to unleash global economic mayhem. To be precise, we warned on the 30th of January about the possibility of global pandemic and economic collapse caused by the coronavirus.

Currently, the question is, what other Black Swans may be lurking under the surface of the global economy?

Events that can be classified as Black Swans are directly related to our ability—or inability—to forecasts events.

The annihilation of Pompeji in a volcanic catastrophe in 79 BC or the destruction of prosperous Greek coastal city of Helike in 373 BC by earthquake and tsunami would probably still count as a Black Swans. But our ability to forecast certain natural events has improved markedly.

For example, the ‘Great Storm of 1900’ that devastated the coastal city of Galveston outside Houston, Texas, was as seen a Black Swan at the time. Almost no warning was given before the  deadliest natural disaster in the U.S. Nowadays, hurricanes do not strike “out of the blue”, but are tracked by the minute and their path forecast with reasonable accuracy at least several days ahead.

Some also consider the financial crisis of 2007–2008 to be a Black Swan. However it was no such thing, as we have explained in our 10th anniversary blog on the Global Financial Crisis. The approaching crisis was observable about a year before from the stresses building in the banking system. Those who understood the fragile nature of the major financial innovation of that time, the ‘Collateralized Debt Obligation’, or CDO, could even see the crisis coming a few years before its onset.

So, whether an event qualifies as a Black Swan is inherently related to our ability to analyze the current situation and to forecast future events.

In March 2017, we warned on the possibility of a global economic collapse. We stated that

The policy makers still have tools in their disposal to delay the inevitable. The big question is what they will do next and this makes forecasting the onset of a crisis exceptionally challenging.

The latter point has become a reality. Analyzing objectively, the crisis started at the turn of the year from 2018 to 2019 or, at the latest, in September 2019, which we detail in this blog.

But this economic collapse, forced into motion by the pandemic, should not have come as a surprise. One just needs to follow standard economics to understand that something has not been right, and that trouble has been brewing for a long time.

For starters, an economy needs to grow without constant monetary support. As we detailed in October 2017, the world’s economic growth had been dominated by Chinese debt-stimulus which it enacted in 2009.

Moreover, stimulative monetary policies and especially programs of quantitative easing had been in incessant operation globally since 2008. The latter led to ballooning balance sheets among major central banks (see Figure). 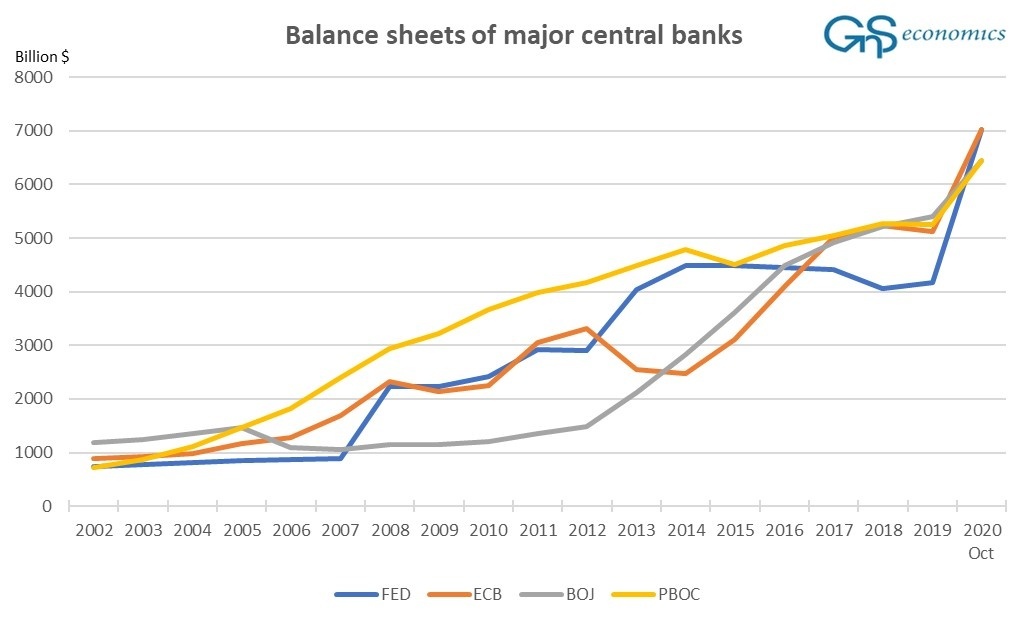 The balance sheets of the Bank of Japan, European Central Bank, Federal Reserve and the People’s Bank of China in billions US dollars. Source: GnS Economics, BoJ, ECB, Fed, PBoC

And so we have reached a point where the coronavirus pandemic has turned many of our economic Black Swans into a grey ones (unlikely, yet forecastable significant events). Now, it’s only the question of where to look.

Do you buy the futile, panicked assertion by governments and central bankers that more stimulus is essential to avoid the collapse? Or do you acknowledge the reality that the fragile global economy has already collapsed and that all the current “emergency” measures, like central bank support and debt-moratoria, are there just to mask the collapse?

If you believe the former, you might want to reconsider—or keep on dreaming. If you admit the latter, you should try to assess what is the best way forward for you and your assets, but also for the economy as a whole.

It is plain that the central bank-run economic governance model has reached the end of its lifespan. We desperately need a more open and free economy and less intervention and continuous “rescues”. This path will not be easy, but the current end-point, global economic dystopia, courtesy of global central banks, is much worse.

More than anything, we need true political leadership—the statesmanship, courage, and wisdom to see through the scare-mongering and distorted economic information.  We must confront dominant elitist economic shibboleths relentlessly to move past what is first and foremost an intellectual dead-end.

Meanwhile, we continue to do our best to inform and educate our subscribers.  Currently, we have a  range of offers on our products that are available through the Black Friday weekend.

previousInto the Global Economic Dystopia?
nextAre we in a ‘New Normal’?