Can the world economy ‘Japanificate’?

Now that the first serious mutation of the Coronavirus has apparently emerged, many are wondering how well the global economy will cope.  “Not well” is what we consider the rather obvious answer.

However, some hope the world economy will now manage to avoid general collapse by massive government intrusion mirroring the Japanese experience, “Japanification”, even though this will result in nothing more than permanent economic stagnation and the massive growth of sovereign debt.

While a questionable—if not truly disturbing—goal, could it be done?

In this blog we explain why the whole world cannot ‘Japanificate’. Moreover, we detail why any such attempt would simply lead to a takeover of the global economy and the financial markets by central banks, leading eventually into a Global Economic Dystopia.

The “example” of Japan

We have already explored the 1990’s financial crisis of Japan in some detail and thus we present only a short summary here.

When that national economic crisis intensified, the Bank of Japan (BoJ) began to act as lender of last resort, the main task of a central bank in a crisis, but it also bailed-out several financial institutions. This was highly exceptional as central banks usually provide only liquidity—not capital—to banks, much less to private financial companies.

The government allowed, and in some cases even encouraged, banks to extend loans to ailing businesses. Government policies permitted the use of accounting gimmicks which, lacking transparency, allowed bank supervisors to implement policies that enabled banks to downplay their loan losses and overstate their capital. So, after the stock and real estate markets had collapsed, a majority of large Japanese banks remained in a state of permanent impairment—functionally bankrupt—for most of the 1990’s.

Failed banks were propped up without either recapitalizating or clearing the bad loans off their books. When banks use their diminished loan resources to support unhealthy companies, to stave off further losses, the funding for risky new enterprises will become scarce, and also tie-up private capital which could similarly be used to support the creation of new businesses. This leads to a vicious feedback loop of depressed innovation, falling production and diminishing profits, resulting ultimately in a stagnant economy.

The Japanese economy has been kept growing at its substandard pace only with the help of constant monetary and fiscal stimulus. One result has been that the level of Japanese government debt has exploded (see Figure 1). 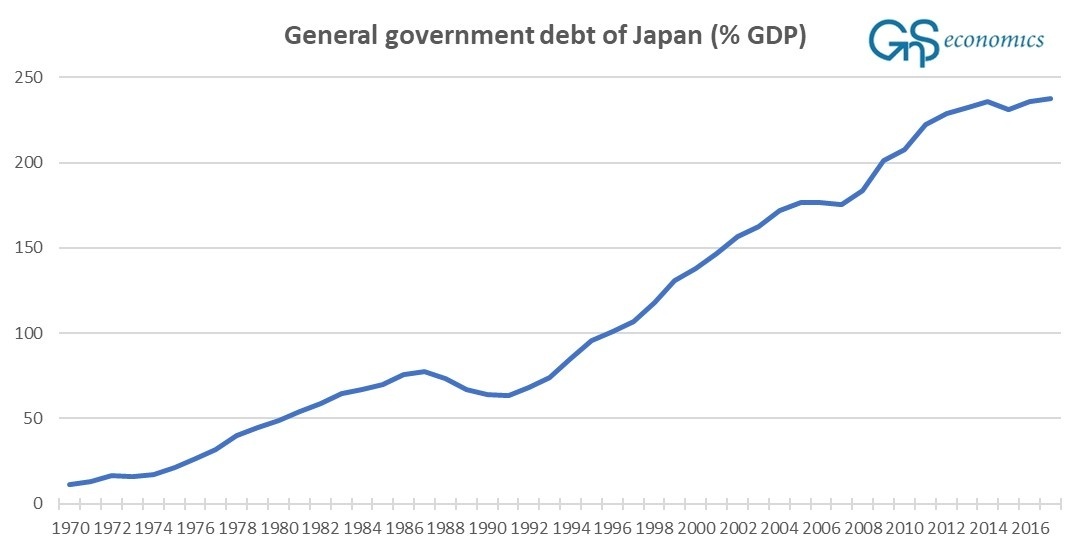 Figure 1. The general government debt of Japan as a percent of the gross domestic product, 1970 – 2017. Source: GnS Economics, World Bank

Can we all turn Japan?

Firstly, the world economy was growing fast in the 1990s which in turn supported the Japanese economy through demand for its exports. Secondly, a “zombified” global corporate sector would (will) be unable to provide enough support for the economy and the financial markets as they themselves would be in constant need of further debt on easy terms.

Thirdly, a zombified global banking sector would be unable to support the growth of new and vigorous enterprises as they would naturally concentrate on their own survival by supporting ‘zombified’ borrowers. Fourth, financial markets rely on healthy corporate profits and strong banks, which help to provide sufficient capital and liquidity to markets to keep them functioning properly. As these factors would not be extant, the world economy would be in a permanent state of vulnerability and at constant risk of collapse.

Thus, a single rich country can manage to Japanificate because it can rely on the support of those companies and banks, and other economies globally that have not. But a critical mass of the world economy cannot—must not—reach a state of ‘Japanification’, because this implies there would be no one else left to provide both demand and capital (thus far, we have failed to establish interplanetary business relations, perhaps Mr. Musk can oblige?)

As global Japanification is not an option, what then?

While China is likely to keep the credit-machine rolling (see Figure 2), which will support the global manufacturing sector, small and medium-sized enterprises (“SMEs”) and the global service sector is likely to feel the brunt of the second and likely third wave of the pandemic.

As we have been warning since May, the European banking sector will not be able to cope with the negative effects of the pandemic. While the onset of the banking crisis was postponed through massive fiscal stimulus and debt-moratoria, they can keep a listing ship from capsizing only for so long.

Governments and central bankers have no access to inter-bank markets, and when confidence among financial institutions is broken, a financial crisis emerges. Naturally, it may also start from a traditional bank run, where depositors withdraw funds from a bank en masse.

The only option remaining to central authorities is full nationalization of the banking sector and the financial markets. This would lead to the ‘Global Dystopia’, which possibility we have been alerting our subscribers to since December 2018. It would imply the loss of economic, and eventually also political freedoms, and could lead to a modernized form of peonage—a desperate, grim and marginalized existence for hundreds of millions.

Fortunately, there is also a way forward which leads to economic freedom and prosperity—though it will be unquestionably more difficult at the beginning.

We need to recover the historical foundations of the western model of economic and business relations. We need free price discovery in the capital markets. We need a vigorous entrepreneurial class.  We need a multiplicity of enterprises of all sizes, engaged in fierce competition—not just winner-take all commercial behemoths.  We also need to re-establish the risk-and-reward relationship in all economic actions to resurrect ‘creative destruction’.  This means business restructuring and outright failures must be expected, and common.

Central banks need to be reined-in or even dismantled altogether. The crushing weight of their influence and interference must be taken off the back of the global economy.  This is something many do not yet understand or accept, at least not yet, but we must be ready to do so because the alternative is so horrendous.

We, humankind, are in a battle for the freedom of both the present and future generations. We sincerely hope that we will be brave enough to do what is necessary to win it.

previousQ-Review 12/2020: The Aftermath of the Coronavirus
nextThe mystery of the stagnated productivity growth