The mystery of the stagnated productivity growth

In late 2017 we reported, as probably the first macroanalytic firm in the world to do so, that the growth of Total Factor Productivity (TFP) has stagnated globally since 2011 (see Figure 1). In the economic community, our finding was met with interest, but also with resistance and disbelief. 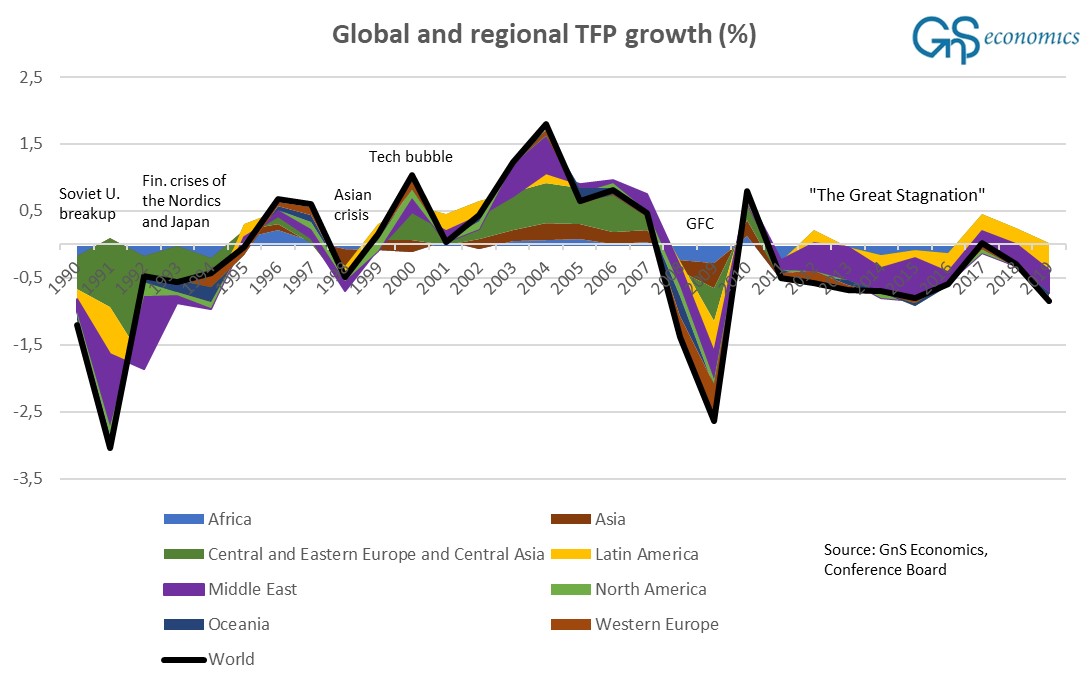 Healthy criticism is naturally the correct way to welcome all radical new findings, but in this case the Modern Monetary Theory (or “MMT”) community in particular attacked our findings with a barrage of (mostly contrived) arguments.

In this somewhat technical blog post, we aim to clarify the misconceptions surrounding the issue, and to briefly summarize why we should, in fact, be gravely concerned about the stagnation of productivity growth.

Effectively, TFP measures the share of GDP growth which cannot be accounted for by capital investment (in equipment and machinery) and the quantity and the improved quality of the labour force (skills and training). Thus, TFP is the “unexplained” element of economic growth.

The existence of such a factor was first postulated as economists failed to capture the entirety of economic growth by changes in capital and labour. To understand the difference between estimates and reality, in 1956 Robert Solow developed the now-famous Solow Model of Economic Growth, which was awarded the Nobel Prize in 1987.

Unfortunately, TFP is hard to measure and no simple data to represent it is available.  It was the Solow Model which first suggested that one can find the value of TFP by collecting data from observed factors for capital, labour and economic growth and then, by applying some basic estimation techniques to the growth model, calculate TFP as the remainder, now known as the “Solow Residual”.

Furthermore, it was discovered that a large part of GDP growth was explained by technological innovation rather than purely by capital and labour. Therefore, the Solow Model inspired a surge in global research on total factor productivity.

It is both unprecedented and unexpected for TFP to stagnate in an economic expansion. Stagnating productivity growth implies that firms are unable to increase their productivity, and that they are unprofitable as well. This is occurs naturally during recessions and crises, when both investments by, and the income of corporations tends to fall.

On the other hand, it is deeply worrying when corporations are unable to increase their productivity in an economic expansion, because it implies that new technology is not flowing into the production process in an effective manner.

The foundations of the Solow model of economic growth

Now, we must take a short walk on the ‘wild-side’ and lay down the foundations of the Solow growth model in order to explain where TFP arises from. We are forced to alter the regular notations due to the limitations of our platform.

In any given economy, the production of goods and services emerges from three main sources: capital, labour, and total factor productivity, or TFP. In Solow’s (1956) growth model, this is illustrated by the formula

Equation (1), even though a simplified expression for the real world, still illustrates the basic idea of TFP. For example, in a case where the capital stock K and the labour force L remain constant, GDP may grow if the TFP increases. Conversely, in spite of investments in capital and labour, GDP may fall under conditions of decreasing TFP.

Equation (1) can be developed further in order to tell a more specific story about the production of Y= GDP. Often used is the multiplicative formula:

which implies that the factors may differ in terms of their relative importance, which in (2) is expressed by the exponents adding up to unity. By taking the logarithms of (2) and then differentiating against time, one can derive an expression which shows how the growth rate of the GDP (Ý/Y) is associated with the growth rates of the factors (Á/A, ´K/K, ´L/L):

The multiplicative formula (3) suggests a very straightforward way to estimate the unobservable rate of technical progress by collecting the observable data from growth rate of the GDP (Ý/Y), capital (´K/K), and labour (´L/L). Note that several observations for each element is needed. They may come either from several different countries in a given year, or from a single country over many years. The more observations, the better.

Once the data is collected, one first estimates the reduced formula:

to estimate the average value for the parameters a and b denoted by ã and õ. Since the estimated parameters are sample-averages, the observed growth rate in individual countries or years may differ from the growth rate calculated by ã´K/K + õ´L/L. In general, the difference between the observed and calculated value is called the residual. Equation (3) now says that the reason for the residual to exist is that the term

is missing. Since we already know the values for ã and õ, we can easily calculate the rate of technical progress Á/A, or the growth rate of TFP, for each individual country or year.

Therefore, the rate of technical progress is known as “Solow residual”. The trick is that the Solow model can uncover the unobserved value of the TFP from the observed values of GDP, capital and labour and thus to explain the “unexplained” part of economic growth.

There’s no mystery, but a worry

Every factor (Y, K, L) is calculated in real terms, which means inflation is removed from them using a price deflator. More importantly, the calculation of total factory productivity is not related to price, salaries, capital gains, This is because all monetary values cancel out in its calculation (see for example the Conference Board for details; requires registration).

What is truly troubling, however, is how global TFP growth can stagnate when the economy is growing.

In Q-Review 1/2019, we detailed the process through which economy grows. We wrote:

Long-term economic growth is driven by technical innovations which improve productivity. What this means is that innovations (from spinning-jenny to industrial robots and beyond) increase the productivity of a human worker thus increasing his wage and making products cheaper.

Moreover, we noted that:

However, this process assumes a crucial element, which has been dubbed creative destruction. It means, simply, that more efficient (more productive) methods will replace the old and inefficient. This requires that old firms fail and new firms take their place.

In a capitalist market economy, both the successes and failures of the private sector drive economic progress. The first enables the accumulation of income and capital, while the second exposes unsustainable businesses while encouraging new sustainable businesses in a process Schumpeter called “creative destruction”.

Thus, the economy grows through the delicate balance between failures and successes. There cannot be one without the another.

As we have been warning since 2013, central banks have, with their excessive meddling in the economy, destroyed price discovery in the capital markets. When risk is not correctly priced in the markets, capital allocation is distorted and poor investment decisions result.

Purchases of government bonds by central banks inflates their prices, making debt financing too cheap, sparing politicians from having to make tough choices fix their ailing economies.  As we are now witnessing in real-time, this leads invariably to over-indebtedness and, eventually, to a debt crisis.

Even more worryingly, low interest rates and easy credit keeps firms that should fail in operation. These so-called ‘zombie companies’ tie-up private capital and bank lending in unprofitable uses leading, first, to stagnated productivity growth in corporations and then, as a result of excessive overall debt levels, to suboptimal economic performance on both a  national (and global) level.

To simplify, central bank meddling is highly detrimental to the economy.

The complete story behind stagnating productivity growth and the wholesale destruction of economies must include the failed policies of governments and the detrimental effects of supra-national control mechanisms. Since the arrival of the pandemic, and the response of governments to it, everything has gone from bad to worse.

We will return to these in detail in the March issues of our Q-Review series.