Our December 2020 forecasts for the World Economy

Because of the current extraordinary political and economic situation of the world, we decided to publish forecasts which we sent to our Q-Review subscribers on the 15th of December 2020. They painted a picture of extreme uncertainty going forward, leading to a non-forecastable global economy.

They also showed, especially, why we are highly skeptical about over-optimistic forecasts on the short- to medium-term prospects of the global economy.

There is no quick fix for the economic imbalances brought to light by the pandemic. We are deep in an economic crater which, cushioned by astronomical levels of fiscal and monetary meddling, has been portrayed as a mere pothole.

In the December 2019 Q-Review we warned that, in the third stage of the global economic collapse, the ‘zombified’ corporate sector would produce a “Flood” of bankruptcies when the recession strikes. This would lead to the onset of the banking crisis in Europe.

The coronavirus pandemic and lockdowns threatened to push the corporate sector to this point, but was postponed by the joint efforts of government, providing grants and debt moratoria, and central banks providing cheap rates and overwhelming liquidity. The recent study by the European Banking Authority showed that banks across the continent relied heavily on the moratoria, with French, Italian and Spanish banks reporting the highest volumes of loans subject to moratoria.

This naturally also postponed the onset of the banking crisis, which we estimated, in our May Special Issue, would begin in the Fall. But, while these efforts stopped the Flood in its tracks, naturally the problems of ailing companies did not just vanish. To the contrary—debt problems are mounting below the surface of the moratoria.

The number of ailing, but not failing (again, “zombified”) companies has grown at an alarming pace in recent months. So, when the moratoria and extra support are finally removed, there will be even bigger wave of corporate bankruptcies. We may even describe this inevitability as a virtual “cliff” of corporate insolvencies.

Moreover, central banks have continued to expand their balance sheets, releasing a tsunami of liquidity into the financial markets. The balance sheet of the Fed currently stands north of $7,200 billion and that of the ECB at north of €6,900 billion. They dominate both corporate and government borrowing rates. Financial markets have essentially been “gosbankified”.

Unfortunately, governments and central banks have, through sustained and concerted effort, been successful in producing both greater zombification of the corporate sector and “gosbankification” of the financial markets.

Naturally, a curious person might wonder how long this peculiar situation can be prolonged. Since we are living in an artificial economy, any economic forecast is subject to two serious uncertainties:

Regarding central bankers, the question is how much more of these aggressive central bank policies the financial markets and the banking sector can tolerate, and just how far politicians will allow this process to go?

Many central bank analysts claim there is a definite upper limit. If there is one, it is unknown, but most are sure that central bankers are not willing to buy the totality of risk assets, and we concur. It’s very unlikely that any central banker wants to be remembered for destroying the capital markets.

Moreover, politics are likely to step into the picture at some point. An example of this is the decision by U.S. Treasury Secretary Steven Mnuchin to allow those Fed pandemic support programs requiring the mandate of the Treasury to expire in December. But because politicians currently oversee many of the central banks, such as the ECB, uncertainty reigns concerning their ability to maintain the status quo.

How will politicized central bankers and political leaders react when financial markets start to crumble and interest rates on sovereign debt explode higher?

An answer cannot be given beforehand, but a good guess is: “more of the same.”  For example, the ECB just extended its Pandemic Emergency Purchase program with 500 billion euros, which now totals 1,850 billion euros!

Repercussions of previous policies, and their role

Nonetheless, past bailouts by central bankers and politicians have had real-life repercussions. They have masked the overwhelming debt, the brittle banking systems and the ‘zombification’ of broad sections of the economy that have worsened since the Great Financial Crisis.

For instance, central banks cannot assure confidence in the banking system, just as they cannot underwrite bad loans and losses in the banking sector. They can only provide cheap credit to banks, and hope that is sufficient to maintain the trust essential to the interbank markets. But many risks can emerge, which threaten the day-to-day operations of the banking sector.

Let’s assume that speculation about an “exit” by a member of the Eurozone begins.  This will immediately lead to increased currency risk for all loans to banks in the country in question. Why would banks risk such sudden currency risk in the interbank markets?

What the central bank could do, as has been done in the past, is to set up a ‘bad bank’ to hold and hide defunct debt, but that requires banking authority cooperation and it could easily break the confidence of both depositors and other banks in some weaker banks, thereby aggravating the crisis.

On zombies, timing and uncertainties

The higher the proportion of “zombie” companies in the economy grows, the weaker, and more fragile the economy becomes. There will be a point after which any easing of debt moratoria will lead to a “cliff” of widespread corporate default and bankruptcy. Politicians and central bankers will be trapped by their own policies if they continue long enough, which may have already occurred.

So, when would we expect the crisis to fully emerge? Based on the current information that Italy and Spain will start end their debt moratoria early next year, our “guessestimate” is that the financial crisis will begin between Q1-Q2 next year. With the continuing of the moratoria and further fiscal and monetary stimulus, this could be postponed.

However, there are several uncertainties lurking below the surface. These include political uncertainties and even violent domestic unrest, as well as the mutation of the coronavirus into something more sinister, for example, in time for a possible third wave in the spring.

The vaccine is likely bring some relief only in the latter part of 2021, which will be too late. Recently, we have observed how rioting against the current political system can also erupt suddenly, both in the U.S. and in Europe. These all contribute to the tremendous uncertainty currently haunting economic forecasts. This is a fact of life that every economic forecaster should admit.

Table 1 presents our quarterly growth “guess-estimates” for the Reset and Recovery scenario. In these illustrations we assume that the European banking crisis will emerge in Q2 2021. 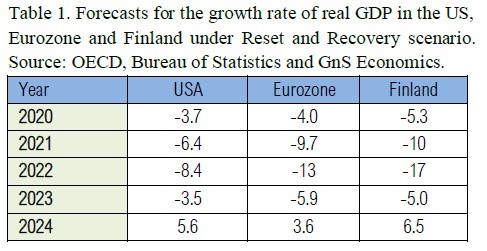 Forecasts for 2021-2023 are indeed grim in the Reset and Recover scenario. We forecast a decrease in real GDP by between 20%-30% across the board. However, in this scenario we also see a rapid recovery beginning in 2024.

As our forecasts in the Q-Review 9/2020 mimic, in the short-term, the scenarios presented here, we will not repeat them. However, it is paramount to understand the overwhelming uncertainty related to any economic forecasts at the current time.

The global economy is set to implode

Skimming through our assessment reveals that we do not see that the global economy is currently forecastable with any reasonable margin of error. Uncertainties are simply too significant.

Moreover, the fragility of the global economy has reached alarming levels. Financial markets are in an obvious  bubble as the stock markets push to absurd new heights, while yields on ‘junk bonds’ are supressed to ridiculous new lows (see the figure), in a recession!

It is now plain that we are not facing the just the risk of a global economic crisis, but of the complete implosion of the world economy!

To put it bluntly, the day of reckoning awaits.

Buy the Q-Review 12/2020: Aftermath report, where we go through the end-scenarios for the pandemic, fromGnS Store

We provide extensive analysis and forecasts on the world economy and on the global economic crisis in our Q-Review reports and Deprcon Service. They are are available at GnS Store

previousThe mystery of the stagnated productivity growth
nextWhen does the coronavirus pandemic end?