Is hyperinflation on the horizon?

Asset purchase (or “QE”) programs can be viewed as modern versions of deficit-financing. With them, central banks buy (mostly) sovereign bonds from the capital markets, resulting in artificially low yields on government bonds. As these programs essentially provide credit from the central bank, they do increase the money in circulation quite a bit.

In the U.S., for example, the quantity of money, measured by M2, has increased by a whopping 26% in a single year. This is the largest annual increase since 1943.

The combination of the fast growth of money in circulation and the decline in production capacity, whatever the cause, is the pre-condition for ravaging inflation. Worryingly, we are seeing those pre-conditions met.

The process of monetization and hyperinflation

Monetization typically proceeds as follows. The central bank buys the debt—bonds—issued by the Finance Ministry (or Treasury). Government then uses this money to increase its consumption. The debt bought by the central bank then either remains on the balance sheet of the central bank ad infinitum or the central bank nullifies it, thereby creating a loss.

When a government uses “debt” from the central bank to sustain or increase its consumption and investments, this newly created money enters the economy through consumption. Government effectively becomes the guarantor of jobs and profits of different industries with money created from “thin air”.

If production capacity becomes limited at the same time due to, for example, damage from war or from large-scale corporate bankruptcies by other causes, consumption increases faster than production. In practice, there is more money chasing fewer products, and prices start to rise very rapidly. Moreover, politicians and bureaucrats tend not to be very skilled in the efficient management of businesses and they permit public pressure to influence their decisions. This leads to wasteful investments, falling productivity and unprofitable enterprises.

When there’s more money in circulation relative to production of goods and services, prices start to rise fast and inflation accelerates. As it continues, consumers, firms and workers start to expect ever-higher inflation, which, combined with the quickly increasing supply of money from the central bank, starts to weaken public faith in the currency.  As inflationary expectations rise, even faster inflation ensues.

A tale of two hyperinflations

Weimar Germany was ravaged by the aftermath of the First World War, which the nation had lost. The subsequent Treaty of Versailles burdened the country with impossible levels of war reparations. Similarly, the collapse of the Soviet Union at the end of the 1980s had left Russia with a vast external debt burden accrued during the final years of the Soviet Union, when it borrowed desperately to keep the planned economy afloat.

Both these instances led to stark choices for their respective governments. Each was faced with an overwhelming national debt and with an industrial base in serious need of reform. Both governments also decided that instead of painful reforms and a likely default, they would try to uphold national demand and production by monetizing their budget deficits.

In Weimar Germany, and in early 1990’s Russia, both governments supported high employment levels through deficit financing. In Weimar, the unemployment rate hovered under four percent and in Russia it was even lower, tending between 1.1 and 2.6 percent between 1992 and 1998. However, labor productivity fell dramatically.

Inflation in these two examples varied from high to extreme. In Russia, monthly consumer prices rose nearly 300 percent in some periods, but the mean monthly inflation rate was “only” around 21 percent from January 1992 till July 1995.

In Weimar Germany, the situation was much more extreme. The wage price index first made spectacular leaps (between November 1918 and March 1920 it increased by 700%, and between mid-1921 and mid-1922, by 500%) after hyperinflation—defined as monthly price increase of more than 50 percent—fully set in. The rate of inflation was, actually, much higher than the rate of monetization. For example, Burdekin and Burkett (1992) show that that rising wage claims and demand for private credit that followed were major contributors to the hyperinflation. In essence, this means that the targeted real wage rate of workers was an important factor and it implies that, when wage pressures build to extreme levels, they are very hard to contain.

Both inflations were stopped by the combination of massive cutbacks in government spending and credit freezes. The inevitable consequence of these actions was a recession, which was relatively short in Germany, and a forced restructuring of the economy.

The social repercussions were heavy in both instances.

The hyperinflation in the Weimar Republic has been linked to the rise of Hitler and National Socialism (“Nazis”). In Russia, the serious damage inflation inflicted, especially on the income of the middle-class, created demands for stability. As in Germany, these frustrations were met by the emergence of a strong leader.

In both cases the main losers were the middle-class, pensioners, and professionals, whose salaried purchasing power fell. High inflation may be avoided by the rich as they have the means to hedge against it by buying precious metals, usually gold, making suitable alternative financial investments and by transferring funds to sounder markets or currencies.

Thus, paradoxically, deficit monetization tends to hurt the most those it is originally aimed to help. This should be remembered now, when ideas like “job guarantees” and “deficits don’t matter” are offered as solutions.

Where are we now?

Worryingly, many of the conditions that led to the extreme inflation episodes in Weimar Germany and in 1990s Russia have started to emerge.

First, central bankers have been running ‘quasi-monetization’, or asset-purchase (QE) programs for over a decade with a stupendous increase during the past pandemic year (see Figure 1). Secondly, supply-chain disruptions have also started to emerge, which will start to crimp production capacities at some point. These are the two ‘pre-conditions’ for an inflationary crisis to materialize.

Figure. The combined balance sheet of the BoJ, ECB and the Fed in billions of dollars. Source: GnS Economics, BoJ, ECB, Fed

What this means is that in coming months evidence of inflation may start to emerge. Inflation expectations, while still somewhat subdued e.g. in the US (see Figure 2), may rise rapidly. 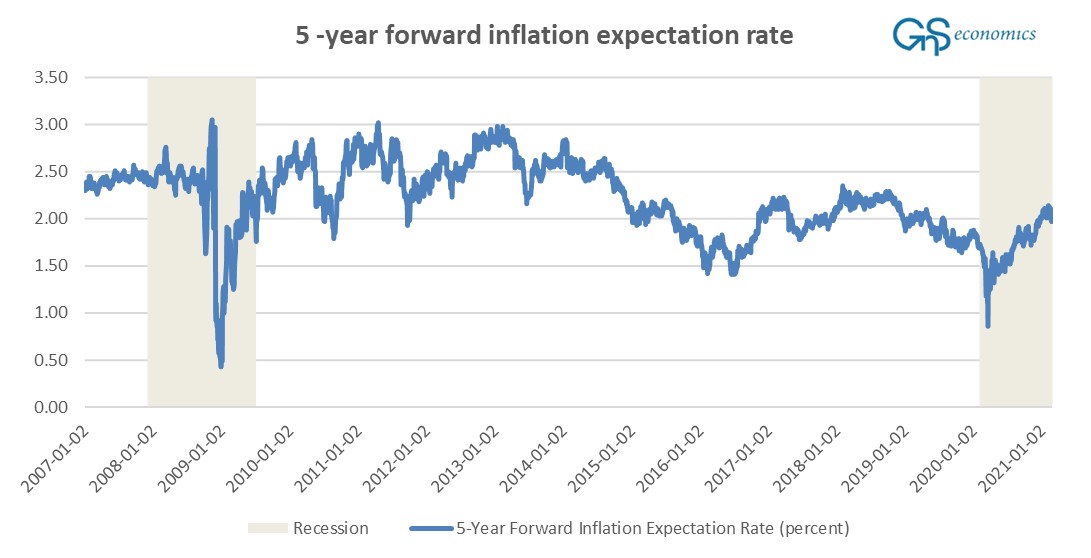 With massive quantities of new money in circulation, all that is needed for an “inflation scare” to start  is a pickup in the velocity of money driven, for example, by improving economic activity in the U.S.  If and when inflation suddenly quickens it may lead to an over-reaction, a shock, among consumers and corporations, which may revise their inflation expectations upwards, drastically and simultaneously.  And then all bets are off.

We have been lulled into complacency believing that central banks can control the economy and stop crises ‘at will’. As we have repeatedly warned for more than two years, this is a dangerous fallacy.

The historical accounts of Weimar and Russian hyperinflations are based on: Ferguson, N. and B. Granville (2000), “Weimar on the Volga”: Causes and consequences of inflation in 1990s Russia compared with 1920s Germany.

We provide in-depth analysis and forecasts on the risks haunting the global economy and the financial markets in our Q-Review reports and Deprcon Service. They are are available at GnS Store