Outlook for the World Economy

Many erroneously believe that we are heading into a sustained economic recovery.

We have been warning all spring that the recovery would start to show signs of fading the closer we got to the summer (see, e.g., Deprcon outlook for January). Now this has become obvious, for example, in the negative surprise in German industrial production, which fell by 1.0% in April and disappointing non-farm payrolls in the U.S., which came in well below expectations.

How do we see developments in the next few months?

In the May Deprcon outlook for the world economy, we detailed the reasons behind the ailing recovery and why negative economic surprises are likely to increase during the summer. We also warned about approaching instability in the financial markets.

Below you can find the unedited version of our forecasts and analysis published in 31st of May. Enjoy.

Our first nowcasts for Q2 show continuing improvement in all regions. Even the economy of the Eurozone, which has been in recession since Q1 2020, should “crawl” its way back to growth (see Figure 1).

However, as we’ve been warning all spring, there are massive uncertainties embedded in all economic forecasts at the moment. We’ll describe them below. 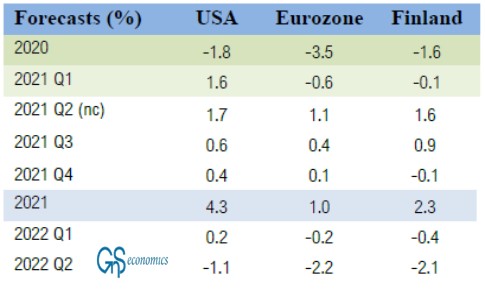 China’s aggregative financing of its real economy eased significantly in April, in accordance with the change in the policy line signaled by Beijing in March (see Figure 2). This should drag the world economy back down during the next 2-3 months, as the China’s ‘credit impulse’ and business cycle has led the global business cycle since around 2009 (see Figure 3).

We’ll detail this below as well.

Not so sunny, after all

Our nowcasts are currently signaling a strong second quarter, but the weather is really not so sunny as the forecasts suggest.

First of all, the rebounding economic activity is strongly supported by unprecedented fiscal stimulus in the U.S. and in the Eurozone, as well as continued and extreme levels of monetary support by the Federal Reserve and the European Central Bank.

Secondly, corona restrictions are being eased in both the U.S. and Europe, which will automatically lead to an economic rebound as restaurants, bars, movies, museums, etc., open and people start to consume more normally.  The question we’ve been asking all through the spring is, how strong and long-lasting can the economic rebound be?

We fear that the answer is, “not very”.

As we’ve been detailing since September 2017, global manufacturing output has been driven mostly by the ‘credit impulse’, that is, the creation of credit in China. That is now waning for the simple reason that the Chinese economy has become saturated with debt. For example, during the next 12 months, $1.3 trillion worth of domestic debt needs to be re-financed.

As we discussed in the March issue of our Q-Review, in late 2018 close to 50% of state-owned enterprises, SOEs, should be considered ‘zombie corporations’, able to operate only as a result of cheap funding offered by the banking sector, effectively following Beijing’s orders, and through the co-operation of the ‘shadow banking sector’, bond markets and local authorities.

China stimulus and the world economy

The 2014 deleveraging effort led to a global mini-recession and the near-collapse of the real estate and housing sectors in China. In late 2015, Beijing panicked and enacted a massive debt-stimulus through the shadow banking sector. The 2018 deleveraging also resulted in a near- collapse of the Chinese banking system in December of that year.

Beijing continued its efforts to de-leverage in February 2019, but the deteriorating economic landscape forced the Beijing to jump back on the ‘stimulus wagon’ in late 2019. In March 2020, in the wake of the corona-lockdowns, credit creation effectively blasted into orbit.  Now China is again trying to rein that in with what we fear will be predictable results both for China and the world.

The lag of the effect of the Chinese credit cycle is around 2-3 months for Europe and around 3-4 months for the U.S (see Figure 3). So, we expect that by July—perhaps as early as  June—the economic bounce will flatten in Europe, and by August-September in the U.S. 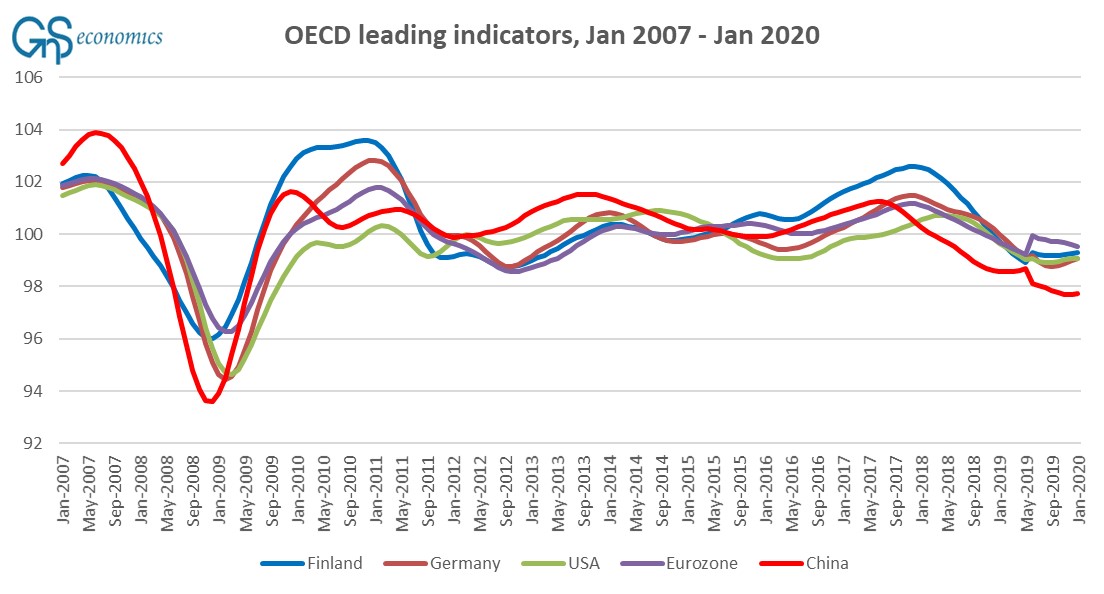 Combined with  resurgent issues in the U.S. financial markets (more precisely in the repo-markets which we detail in our blog) we expect financial market turmoil to return by August, September the latest. However, there are several financial hotspots, such as the highly-speculative crypto-currency space, which could spark financial market issues even sooner than that.

We also recommend everyone to pay close attention to global bond and interest rate markets. Central banks are flirting with the idea of ‘tapering’, potentially reducing the rate of their bond purchases. As this coincides with a rise in inflation expectations, it could lead to a sudden surge in bond yields, likely causing the customary implosion of over-levered hedge funds or even banks, with unknown knock-on effects.

Moreover, even though the Recovery Fund of the EU was ratified in Finland, other possible political ‘earthquakes’ are brewing under the surface. As we’ve been warning, this is the year to “expect the unexpected” in the political realm as well.

It’s our view that we are heading towards highly unstable times in the financial markets and probably also politically. Central banks will do their utmost to maintain calm, which implies that summer could be relatively tranquil.

However, as noted above, we expect that the fall—as it frequently has in the past—will likely bring a major shift in economic and market sentiment, and the turmoil that goes with it.