Cryptocurrencies have experienced a remarkable rise in numbers and popularity in recent years. At the same time, and especially after the economic shock delivered by the coronavirus, central banks have been planning to issue their own digital currencies.

They represent two sides of the same “coin”: while cryptos are usually created and distributed freely, central bank digital currencies, or CBDCs, are centrally controlled. We thus may be on the verge of a new sort of “currency war”.

In this special issue of our Q-Review series, we analyze the changes the monetary system is likely to face in  coming years. In this report, we first summarize the history of money and then move into explaining cryptocurrencies and CBDCs. Then we summarize our analysis and present our forecasts for the world economy and financial markets.

In this blog-entry, we briefly summarize our findings.

Cryptocurrencies consist of decentralized digital assets that are secure and semi-anonymous i.e., all transactions are recorded in a ledger, although parties’ identities are hidden. Blockchain technology is used to ensure the integrity of the data.

Cryptocurrencies are generally not backed by any institution or organization. They have no fundamental or intrinsic value, but may have, by design, a high degree of scarcity.

The algorithm creating the cryptocurrency may also try to stabilize the value of the cryptocurrency relative to a fiat currency issued by a central bank and government. These so-called stablecoins include XRP, which acts as an intermediary between currencies of networks, and Tether, which is (supposedly) pegged 1-to-1 to the U.S. dollar. Cryptocurrencies may also be backed by assets, like real estate, or commodities, like gold or oil.

However, while the technology itself is promising and even “revolutionary”, its application alone does not add a tremendous amount of value. Nobody owns blockchain technology and anyone can make a new cryptocurrency, and many have done just that.

A CBDC is ‘synthetic’, when it is backed by reserves at the central bank. Another name for this is a wholesale CBDC. A retail CBDC is in question, when it is widely acceptable digital form of fiat money, which can or cannot act as a legal tender.

While the CBDC can be seen to help the monetary system in many ways, for example, by increasing the availability of currency in areas with limited access to cash, it also bears massive and close to fatal risks.

Firstly, the Issuance of CBDCs would corrupt the banking system, by making the central bank a competitor of those it regulates and guards—commercial banks.

Secondly, it would expose the banking system to catastrophic runs and, in the worst case, turn the monetary system into a government-controlled dystopia.

The monetary revolution ahead

The main problem of many cryptocurrencies is that they do not fulfill the requirements of money. For example, Bitcoin’s “price” is far too volatile to serve as a currency of any nation (see the Figure). It also not backed by any collateral. So-called “managed coins”, on the other hand, raise a question: is the asset-backed cryptocurrency anything more than a medium between assets and commodities? 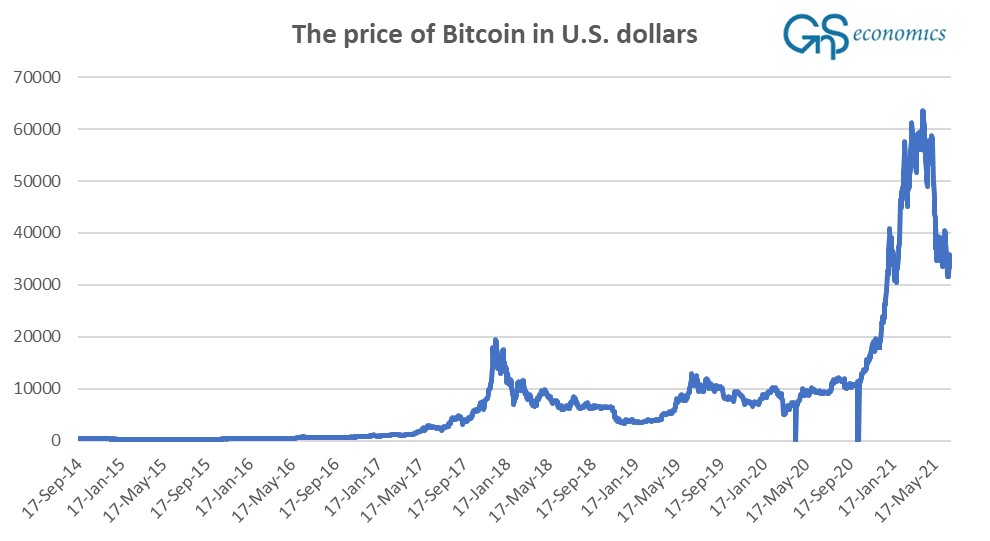 CBDCs ‘attack’ the banking system from other angle: safety. The issuance of a CBDC would make the central bank a competitor of commercial banks with a deposit services that are essentially fail-proof. During a banking crisis, a run to the CBDC would be practically guaranteed.

The future is uncertain, as always, but change is coming. The ‘battle’ between cryptocurrencies and CBDCs seems almost guaranteed. We must fully acknowledge the risks we are facing, and act accordingly. Our economic future, and freedoms, depend on that.

We explain this in more detail in our report.

Purchase the Currency Wars special report from our Store.