Inflation is here to stay, and it should worry everyone

In the March issue of our Q-Review series we warned about the coming inflation shock. We continued to issue warnings on quickening inflation rates in the April Outlook of our Deprcon  service, where we, for example, noted that:

In certain categories, like transport, commodities and raw materials, prices are rising at the fastest pace in modern history.

Now with the U.S. consumer price index recording a print of 5.4%, the highest in 13 years, and producer price index a print of 7.3% Y-o-Y, the largest 12-month advance since the calculation of annual index began in November 2010, the shock has clearly arrived. And we believe that there is more to come.

In this blog-entry, we explain the basis for our warning and summarize our view for inflation going forward. We expect that inflation will not be “transitory” but “persistent” in nature, which will eventually force central banks to raise rates—with the ensuing, and predictable, catastrophic consequences likely.

In November, the International Monetary Fund, or IMF, found that the increase in inflation was noticeably faster than the rate calculated by standard inflation measures in all regions due to a change in consumption patterns, which caused the standard inflation gauges to miscalculate the actual speed of inflation. There were also reports of serious bottlenecks in the transport of vast quantities of commodities, which had lifted prices.

These meant that inflation had been running higher than was shown in the official figures, while economies were in lockdown across the western world. We realized that when economies opened up, two things would happen.

First, consumption would shift from how one buys when in lockdown, notably, goods from online stores, to consumption behaviors more traditional to open economies. Secondly, due to lockdowns, airlines, hotels, restaurants, and so on suffered from diminished capacity, which means that they would probably be unable to meet suddenly increased levels of demand.

We therefore observed the combination of a sudden uptick in prices for services with already fast-increasing prices for commodities. Quite simply, there could not be any other result than an ‘inflation shock’. Thus, we warned that:

Inflation can thus suddenly rise well above the “moderately above 2%” threshold which some central bankers, such as Fed Chair Jerome Powell, currently consider as their target.

The likely persistence of inflation

In the June issue of our Q-Review series, we continued to issue warnings concentrating on the high probability that accelerating inflation will be much more persistent than many anticipated. We wrote:

In the U.S. inflation pressures are transferring from “want to have” products, like lumber, to “need to have” like food, rents and fertilizers. This is likely to be manifested in increased wage pressures, because everyone will notice that the purchasing power of their wages are declining. If wage pressures increase, inflation expectations increase and this will translate into higher wages and prices set by corporations fueling faster inflation, long-term.

Moreover, we reiterated our warning concerning continuing bottlenecks in supply but added that the “hiring issue” may become another driving force of persistent inflation.  Generous stimulus checks, combined with the soaring cost of living—including housing, automobiles, food and insurance—have created a situation where salary expectations have also risen markedly. That is, workers are demanding higher wages before they are willing to accept offers of work. This is likely to translate into higher wage expectations, raising the cost structures of enterprises which will force them, in turn, to increase prices.

Higher wage expectations also have the tendency to be manifested in higher inflation expectations more broadly, which fuels persistently faster inflation. As a clear warning sign of this, University of Michigan Inflation Expectations have risen quite markedly already in April and May (see the figure). 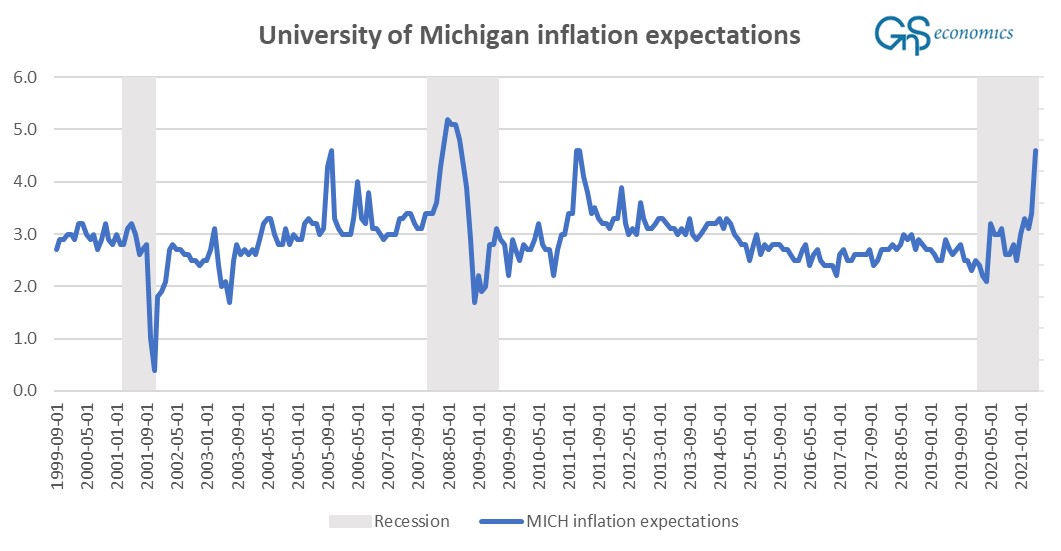 Accelerating  inflation puts central banks in a very difficult spot, as their mandates require them to maintain “price stability”—now considered, counterintuitively, to consist of 2% or higher annual consumer price inflation. Now that this number has clearly broken to the upside, all central banks can do is to fervently hope that it is, in fact, “transitory”.

Thus, central banks have been conducting “rain dances” around the 2% inflation target. Recently the ECB conducted an excruciating exercise in central banker jargon, by stating that

When the economy is operating close to the lower bound on nominal interest rates, it requires especially forceful or persistent monetary policy action to avoid negative deviations from the inflation target becoming entrenched. This may also imply a transitory period in which inflation is moderately above target.

In plain English this means that the ECB would want to see the economy ‘run hot’ before it raises rates.

The real reason for this verbal contortion is, of course, the massive bubble existing in the European bond markets, where, in addition to corporate debt markets, yields in sovereign debt markets have reached lows never seen before in all of human history. Other frothy asset markets such as stocks and real estate would, almost without question, be unable to cope with the withdrawal of the support of the ECB through any attempted tapering of QE programs.

The Fed is likely to be as terrified of what higher interest rates would do the financial system of the U.S. Let’s not forget that the effort of the Fed to shrink its balance sheet in 2019 led to the near implosion of the “repo” markets. That is, most probably, the actual reason behind Chairman Powell’s recent remarks.

Running down the clock

So, central bankers are effectively, and absolutely, trapped.

If inflation continues to accelerate from here, they basically have no other option left than to try taper asset purchases and start to raise rates. But with the current state of super-highly levered financial markets, the mere expectation that financial conditions may become less loose will start ‘fire sales’ in the most speculative corners of the market.

Central banks have been forcing artificial liquidity into the markets, through QE-programs, since late 2008. This has not led to faster consumer price inflation in part for the simple reason that they, in combination with zero and negative interest rate policies, have destroyed productivity growth by creating hordes of “zombie corporations”. This creates a massive risk for the global economy, about which we have been sounding the alarm for a long time (see, e.g., this, this and this).

Imagine what happens if central banks are forced to increase interest rates? It’s not just the financial markets that would get hit, but the corporate sector as well.

As we have been warning since December 2017, this could create a ‘perfect storm’ in the global economy with crashing asset markets, failing corporations and banks, and defaulting governments—the “mother” of all economic crises.

Now, with central bankers trapped in a predicament of their own design, this potentially catastrophic scenario is closer than it has ever been. The clock is ticking.  It is time to start worrying.

See our Crisis Preparation -reports for guidelines how to prepare for the coming ‘perfect storm’.