Why CBDCs should never see the light of day

The speed with which central banks are pushing for digital currencies is very worrisome, because they would alter the monetary and banking systems in a radical way. Public discussion about their risks, much less direct criticism, has been notably muted. In Q-Review 6/2021 we analyzed their risks thoroughly, and in this blog we summarize our findings.

Central bank money is at the core of modern financial systems. It is comprised of physical cash in circulation and central bank reserves, i.e., deposits of financial institutions at the central bank.

A central bank digital currency, or CBDC, would create another layer of central bank money. In its strictest form, a CBDC is a digital payment instrument, which is denominated in the national unit of account, or currency, which is also a direct liability of the central bank.

The basic mechanism of a wholesale, or a synthetic CBDC, “sCBDC”, is when private sector payment service providers issue liabilities matched by funds (reserves) held at the central bank. The private issuers of digital currencies would act as intermediaries between the central bank and the end users: consumers and firms.

A retail CBDC could be either account- or token-based.

The former (an intangible property) would involve the transfer of a claim between accounts and it would resemble a bank account transfer with the exception that accounts would be within the central bank. In the latter there would be a transfer of a token between wallets. Settling transactions using a token-CBDC (a tangible property) would require external verification of the tokens, which would imply that anonymity, like with transfers in cash, could not be guaranteed.

Issues with the banking system I: profitability and over-sight

Both systems, a retail and wholesale CBDC, would affect the banking system in a detrimental way.

First of all, fractional reserve banks, where banks hold only fraction of their liabilities and assets are covered by capital or CB reserves, would come under pressure. Banks would be likely to lose some customers, pushing them to seek more wholesale funding, such as funding from commercial credit markets like state and local municipalities and brokered deposits. Banks could be forced to raise interest rates on deposits, which would reduce their profits.

The issuance of a retail CBDC would effectively corrupt the banking system.

It is the role of a central bank to monitor and regulate banks and to act as a ‘lender of last resort’ during a banking crisis. With the issuance of a retail CBDC, the central bank would also become the competitor of commercial banks.

Commercial banks would be forced to compete with the more secure CBDC with higher interest rates, and even if the CBDC would be non-interest bearing, it would still offer safety especially in a zero or negative interest rate environment. In the U.S., for example, deposits in the commerical banks total over 17 trillion dollars (see the Figure). Banks would thus compete against the CBDC by issuing higher deposit rates, while they would be at the mercy of central bankers concerning regulation and guidelines. 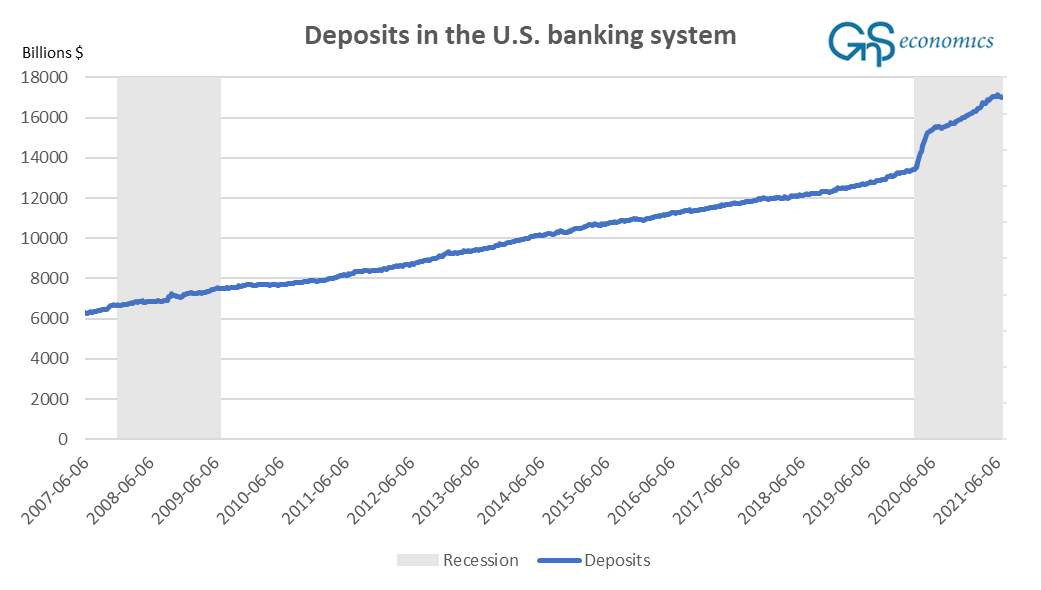 It is very questionable whether central bankers could act in an even-handed way in this setup.

It is likely that an even bigger problem would arise in a banking crisis.

Because CBDCs, or CBDC ‘e-money’ holders would be fully covered by central bank reserves, unlike fractional reserve banks, the existence of sCBDCs could easily worsen a potential run on banks worsening the crisis. However, in the case of a retail CBDC, issues would become even more pressing.

If the central bank has the backing of a fiscal authority, it can provide banking services, deposits, backed by the taxing power of a government. It is obvious that in this situation, the central bank will offer superior deposit safety in a banking crisis. Thus, if consumers believe that a commercial bank run is imminent, all depositors will move their deposits to the safety of a central bank.

Such a flight from commercial banks to the safety of the CBDC could be countered only with strict deposit limits to the central bank. It is questionable whether such limits could be maintained in a banking crisis as the crisis would, almost certainly, create a political pressure to open the balance sheet of the central bank with a CBDC to all.

This would lead to a situation where the banking system would consist of just one bank, the central bank.

If a CBDC dominates the monetary realm of a country, the central bank would come under heavy political and economic pressure to use its profits and its ability to divert lending towards politically desirable ends. These would be likely to include “green” initiatives, social, gender or racial equality, universal basic income, or even funding to supporters of “politically acceptable” political parties. This would lead to a deluge of unprofitable investments and the utter corruption of the banking system.

Moreover, as central banks are only ‘quasi-independent’, the banking system would essentially become controlled by the government. This raises the plausible issues relating to the issuance of CBDCs to a whole different level.

As we described in Q-Review 12/2020 and in our blog, if a central bank succeeds in dominating the monetary realm of a country, we would effectively move into a government controlled economy. While such “monetary fascism” would not, most likely, appear immediately, the system could very easily eventually mutate as such.

Issuance of a CBDC would corrupt the banking system by making the central bank a competitor of those it regulates and guards, i.e., commercial banks. It would expose the banking system to catastrophic runs and, in the worst case, turn the monetary system into a government-controlled dystopia.

Quite simply, CBDCs should never see the light of day. Why are they been pushed then?

Central bankers and governments want to have control over their money. The right to issue currency gives power over those who use it.

Moreover, central bankers are mortally afraid of losing control of the economy. As we have described, they may be very close to that point. A widely used CBDC would give them the ability to push their failed monetary policies even further. They could push interest rates deep into negative territory and control lending activities.

So, through the issuance of a CBDC we would step onto a road that leads to monetary totalitarianism run by a handful of bureaucrats. History shows clearly how perilous such a world would be. We dearly hope that we do not need to learn that lesson once again.

Purchase Q-Review 6/2021 -report, where we concentrate on digital currencies from our Store.

previousInflation is here to stay, and it should worry everyone
nextQ-Review 12/2021: The Great Reset