Some think that the arrival of economic crises, or economic development in general, cannot be forecasted. In our latest Q-Review report, we set out to correct this grave misunderstanding.

The idea on “non-forecastability” of the economy is a strange idea, a fallacy of sort, as economies are essentially what we make them to be. That is, we as consumers, corporations and voting members of our democracies create our economic future.

What this means is that majority of economic developments are inherently inborn meaning that they are created within the economic ‘machine’.  Sometimes an outside, or exogeneous shock, like coronavirus or war, appears, but such developments can also be forecasted, with some margin at least.

In this Special Issue we decided to provide the building blocks, or the method, we use in economic forecasting. It consists of two main components: the Narrative and Modeling. We have been using it to successfully anticipate turning points in the economy and markets for 10 years.

We, naturally, also provide our forecasts, which have been turning darker and darker during the past year. We are forecasting a major economic crisis to commence early next year.

In this blog-entry, we briefly summarize the process we use in forecasting, and our outlook.

We have been using scenarios to analyze and forecast the developments in the world economy basically since the beginning (in 2012). This is because future consists of scenarios.

This means that, in each point in time, any conceivable future path for the individual, society, economy and the markets exist with some probability. These are determined by endogenous (within system or inborn) and exogeneous (outside system or external) factors or events, with the latter of these being relatively rare. But sometimes they appear, like we have recently witnessed with the Coronavirus and the war.

The fact that economic developments are inherently inborn (endogenous) makes them forecastable. In practice, this means that macroeconomic factors like capital investing by firms, consumption of individuals and the trust of investors determine, how the economy will proceed. If companies and individuals, e.g., start to save aggressively, the economic growth will slow and inevitable turn to decline meaning that the economy enters a recession.

A trending series presents a nearly constant development of something through time. Trends are all over us. The speed of computing has expanded in a trend-wise (exponential) manner for decades. Prices of consumer goods have trended upwards for a very long time, sometimes slower and sometimes faster, like now. Trend-following is the backbone of economic forecasting.

For example, the amount of CDO’s and different leveraged financial products tied to the US housing market rose to astonishing levels prior the crash of 2008, and the leverage among ordinary households did the same. After the housing market had risen further than ever before, it started to fall, and the economy began its path towards the financial mayhem of 2008. The strong upward trends in leverage of both households and financial institutions, as well as the very fast growth of exotic financial products, were a foretell of problems in the horizon.

Trend-following needs to also go beyond standard economic variables. The cultural and regulative trends also give us hints, where the vulnerabilities in the financial system may be growing. For example, moral hazard in the banking system has often been a powerful foretell from an approaching financial crisis.

The Narrative is used to explain the process how an economic crisis or any economic developments comes to be. It needs to detail the imbalances, risks and other vulnerabilities of the financial system and the economy.

Narrative is crucial for forecasting, because the economy is a ‘living organism’, meaning that it evolves constantly, and without the narrative, which tracks its development, it’s basically impossible to reliably forecast its development. Although the narrative is effectively just a storyline on future developments, it has to be based on events that have already occurred.

While one can construct a reliable forecast on the approaching crisis from the Narrative alone, it often does not provide an accurate estimate on, when the crisis will arrive. For successful forecasts on timing, one needs statistical information, modelling of the path ahead.

The crucial question is what variables help to forecast the economy?

Many have relied on the yield curve on their forecasts on the future path of the economy. It was long held view, supported by academic research, that the inversion of the yield curve was a very efficient recession prediction tool. However, now that relation is broken (see the Figure). 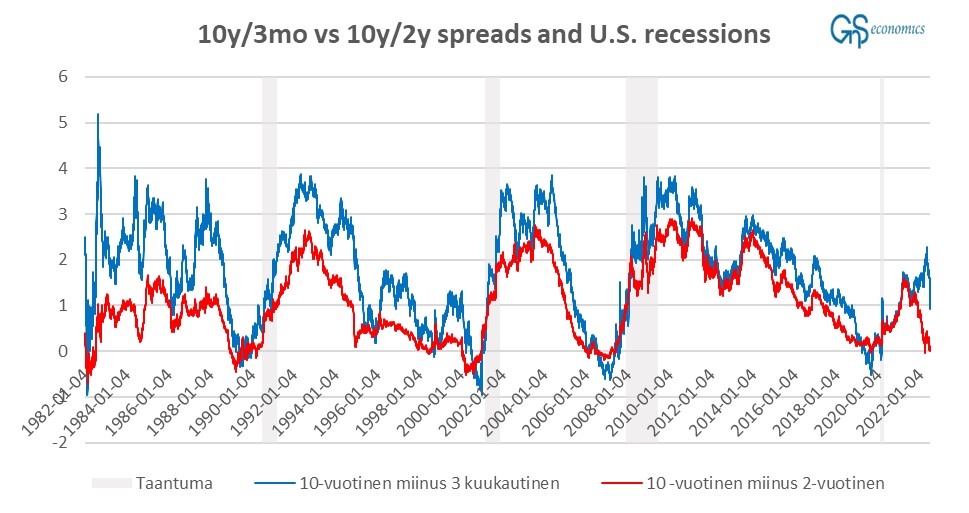 The divergence between the 10y/3mo and 10y/2y spreads makes no sense, and most likely driven by the buying and selling of Treasuries (QE) by the Federal Reserve (explained here).  Thus, the yield curve and the U.S. Treasury market is now completely dominated by the Federal Reserve and thus no forecasts should be made using data derived from it.

At the end of the cycle, and then some!

We can safely assert that we are near the end of this business cycle. The over-indebted economy simply cannot cope with inflation and rising interest rates. We consider the onset of a global recession during the rest of the year to be almost certain.

However, our biggest worry and problem for the world economy is the Russo-Ukrainian war. It has dragged on, and its scale is approaching our ‘bad scenario’ presented in the March Q-Review report. It and sanctions related to it are likely to cause major disruptions in global trade and industry-crippling shortages over the course of next 12 months.

The outlook of the world economy is extremely dark, indeed!

We provide in-depth analysis and forecasts on the risks haunting the global economy and the financial markets in our Q-Review reports and Deprcon Service. Their subscriptions are are available at our Store.

previousCentral bankers are ‘running down the clock’
nextWhat is the Great Reset?