We have been warning of the possibility of a global economic collapse since March 2017. After documenting the path the crisis is likely to take in December 2017, we have been gathering information about how investors, households and corporations can prepare for the crisis.

In June 2018, we published a report gathering our first thoughts on economic crisis preparation. In this report we extend that analysis.

Since Q1 2009, some 55 percent of money (non-financial credit) created in the global economy has come from China. Since 2009, China has been responsible for 52 percent of all capital formation in major industrialized nations, including the US and the Eurozone. By comparison, before the Great Depression, the US accounted for some 60 percent of international lending.

The stimulus in China has focused mostly on infrastructure investments and banks pushing cheap credit to households and businesses. Chinese officials have also bailed-out several state-owned enterprises. This has led the Chinese debt-to-GDP ratio to an utterly unsustainable trajectory (see Figure) and rendered its forced investments increasingly unproductive. 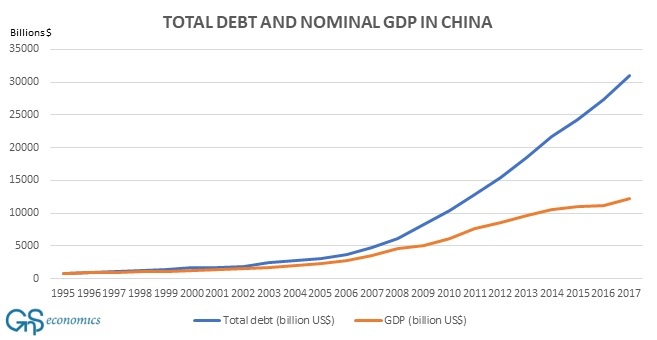 On fragilities and shocks

What we have come to understand is that recessions are not simply “unnecessary evils” plaguing the economy, but that they are, in fact, vital to prepare the economy for the next upturn. In Austrian economic theory, recessions cleanse the economy of unproductive investments, freeing capital for new, more productive enterprises. If this process is interrupted before certain level of cleansing (the degree unknowable beforehand) has been reached, the new business cycle will be burdened by unprofitable firms–zombie companies–which will cripple any nascent recovery.

The bank bailouts during the crash of 2008 combined with zero-interest and quantitative easing policies by the central banks forced the business cycle into expansion mode prematurely. Unprofitable banks (especially in Europe) and firms were kept operating with very low interest rates and easy money for 10 years. The global economy “zombified”.

Now, as the effectiveness of both central bank and Chinese debt stimulus is waning fast, a global recession will inevitably commence during the next few quarters. This means that economic shocks, such as  a possible trade war between China and the US, will not change the outcome but may make the recession start earlier.

Although one central bank, the Federal Reserve, has a few stimulus options left, it will be broadly impotent in the face of global recession, because the global economy has been driven by China. Thus, when the global recession commences, there will be nothing stopping it from morphing into a global depression.

Because central banks have created an ‘everything bubble’ in the financial asset universe, it will be much more difficult to prepare for the coming economic mayhem than in previous cycles. The coming crisis will also be exceptional in one important aspect: it will the first-ever truly global economic crisis and depression.

Because of this many former safe havens are unlikely to be “safe” this time around, and “zombified” banks and companies increase risks in bond, stock and futures markets. The crisis will also hit harder than any crisis before. We cannot rule out the possibility of entire countries plunging into insolvency.

In this first Crisis Preparation report, we present the basic building blocks of economic crisis preparation for firms, investors and households. Crisis preparation rests on the idea of counter-cyclicality, where investment and business decisions are made to offset the effects of the business cycle.

In the Q-review report, we will monitor the path and timing of the crisis as well as provide guidance on how to prepare and benefit from it. In the June issue of Q-review, we will detail the general guidelines for economic crisis preparation. We continue to extend these guidelines in the coming Crisis Preparation reports.