Central bankers are ‘running down the clock’

Asset markets in the U.S. are flirting with a ‘bear market’. Declines have accelerated also in markets across the globe. The reasons behind the declines are rather obvious. Inflation is still spiking forcing the hand of central bankers, while the economic outlook is dimming.

We warned on this in June/July, when we wrote:

If inflation continues to accelerate from here, they [central banks] basically have no other option left than to try taper asset purchases and start to raise rates. But with the current state of super-highly levered financial markets, the mere expectation that financial conditions may become less loose will start ‘fire sales’ in the most speculative corners of the market.

We are there now, and the situation is only likely to get worse. But how did we get to this point?

We’ve been very vocal in our warnings considering the ultra-loose monetary policies of central banks over the years. Our criticism has concentrated on two aspects of low interest rates and programs of quantitative easing, or QE:

In a word, the policies central banks enabled after the GFC have been an utter menace. The “insanity” of it all is best visualized in the manic growth of the balance sheets of central banks, especially during the last two years (see Figure 1).

Figure 1. The size of the balance sheet of the BoJ, ECB, Fed and the PBoC as a share of world GDP. Source: GnS Economics, BoJ, ECB, Fed, PBoC, World Bank

As we, and I, have explained on several occasions (see, e.g., this, this and this), QE -programs are a form of central bank credit, which creates all kinds of distortions in the financial markets and in the banking sector. For example, in Brazil the first three QE-programs of the Fed led to capital inflows, exchange rate appreciation and stock market and credit booms, which soon reverted and collapsed, after the Fed ‘tapered’ its purchases in October 2014. In general, the QE -programs of the Fed led to capital outflows, especially to emerging market equities. They, quite simply, fed a global asset market bubble.

Past year, combined with very low interest rates and shocks, they (finally) led to an outbreak of inflation.

It’s rather unfathomable, why central bankers failed to react to hastening inflation in the fall. The Chairman of the Federal Reserve, Jerome Powell, has already stated that waiting this long was “a mistake”. But, how could they get the inflation picture so wrong for so long?

Maybe they didn’t. Maybe they were just afraid to admit the gravity of the situation.

By fall 2021, it was plainly obvious that inflation will not come down, and thus the “transitory inflation” narrative was as good as dead. When the economies opened up with a record amount of money sloshing around in the world economy (see Figure 2), it was plainly obvious that the pace of inflation will not come down but stay high or even accelerate. Econ-101. 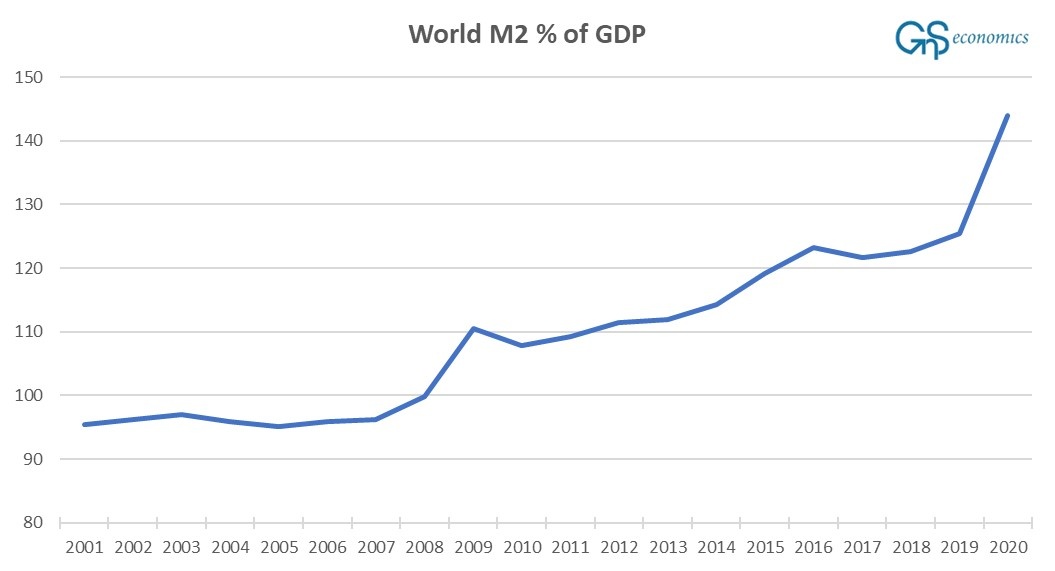 It’s possible, or even likely, that the Fed Presidents have been scared of breaking the asset markets, and this is why they have delayed the rate hikes for so long. The ECB, on the other hand, has been afraid of upsetting the delicate balance in the European sovereign bond markets, which could lead to unravelling of the euro. The fact that central banks have become ‘politicized’ has also probably played a role in their ‘dragging their feet’ -policies.

Regardless, central banks are way behind the curve, and now they are trying to catch up. However, their hurry may prove rather destructive.

The end is ‘nigh’

By then, the balance sheet of the Fed had shrunk just by little more than $280 billion. In the turn of the year, 2018/2019, selling in the equity markets escalated into a rout and spread to the credit markets forcing the Fed to its infamous ‘pivot’, where the Fed officials walked back on their previous statements of several interest rate rises and automated balance sheet run-off in 2019

Now, the Fed is planning to shrink its balance sheet at a pace of $47.5 billion a month, which is (approximately) the maximum speed of previous QT, and to accelerate it to $95 billion in a matter of months. Good luck.

We do consider that central bankers are very committed of getting inflation under control, which is understandable, but what happens, when the credit markets start to ‘crack’? Are central bankers really willing to push economies into a depression?

We consider it to be rather unlikely, but mistakes can happen. There will be a point after which the collapse in the financial markets cannot be stopped anymore, with any amount of QE.

In any case, central bankers are now “running down the clock” on markets. Be prepared for a rough ride.

See our Crisis Preparation -reports for guidelines how to prepare for the coming ‘perfect storm’.