We have been warning about the impending economic crisis since March 2017. Central bankers and Chinese leaders have been able to postpone the onset of the crisis for several years, but now the coronavirus outbreak will make any such efforts futile. We are heading to a new global economic crisis.

However, crises are not just doom-and-gloom, and the human costs of dangerous viral outbreaks cannot be measured in money. Still, economic crises do sow the seeds of large potential profits for prepared investors, companies and households. This is because crises will re-price a wide range of assets—which makes a crisis an opportunity as well. 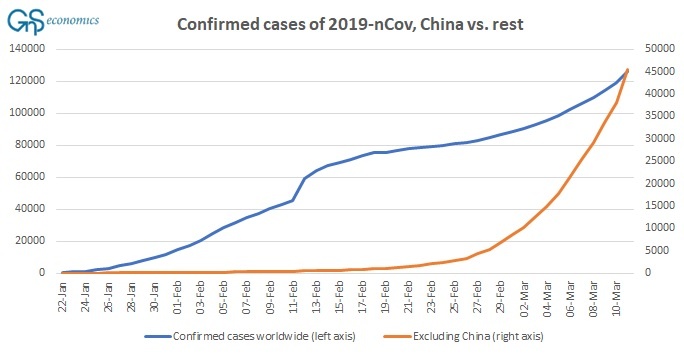 Figure. The confirmed cases of the 2019-nCov virus globally and excluding China from the 22nd January till the 11th of March. Source: GnS Economics, WorldOmeter, Johns Hopkins CSSE

The approaching economic crisis put in motion by the coronavirus outbreak will be exceptional in one important aspect: it will the first-ever global economic crash. The Great Depression spread across the globe in the 1930’s, mostly because of the gold standard, but it only created serious economic malaise in few countries outside the U.S. The Global Financial Crisis (GFC) was also global, collapsing the global flow of liquidity (credit), but it was quickly contained.

The coming crisis will be a different “beast” altogether, even without the virus outbreak.

The biggest reason behind is the mispricing of risk. When central bankers forced interest rates to zero and below, and began to push artificial liquidity into the financial markets through QE-programs, they started to undermine the ability of markets to allocate resources effectively by distorting market prices.

The world will pay a steep price for the arrogance and errors of global central bankers. The ‘everything bubble’ they have blown has also made hedging especially challenging this time around. We will help you to find efficient hedging positions.

In this Q-Review Special Issue we will explain how investors, households and corporations can protect their assets from both the pandemic and the economic collapse it will bring.

Become our Annual Subscriber to receive quarterly updates and forecasts on the progress of the epidemic and the economic collapse. The annual subscription of Q-Review -reports is available for €329. See the terms and conditions. Order Now

Financial hedging against the pandemic

previousQ-Review 1/2020: Estimating the economic impact of the coronavirus
nextFinancial markets are becoming unhinged