The stock market has been rallying lately. It has been supported by the People’s Bank of China (PBoC), which started its liquidity operations in mid-December, and the Federal Reserve (Fed), which changed to a much more ‘dovish’ tone in January. But, is the rally sustainable?

We consider, with rather high certainty, that it is not. This is for three reasons:

Yet somehow, the stock markets seem to be ignoring all these signs. What is going on?

Financial history is riddled with asset market manias. Their features are not identical, but they do follow similar patterns.  They tend to occur in expansions, partly driving them by the euphoria that also grips real economic agents (households and non-financial firms). Credit is plentiful, and investment and consumption spending surges. There’s a sensation that “We never had it so good!” During manias, asset prices tend to decline immediately after they stop accelerating. A ‘Minsky Moment‘ occurs. This happens unless something forces the frenzy to continue.

After the victory of President Trump, the U.S. stock market shifted into high gear. During the next 15 months the Dow Jones Industrial Average (DJIA) rose by an astonishing 31 percent from already elevated levels, breaking previous records. The rise was fueled by massive global injections of artificial central bank liquidity (QE -programs) and tax breaks by the Trump administration. Credit eased, the U.S. economy and corporate earnings boomed and unemployment dropped to multi-decade lows. America  had the “best economy ever”. A mania took hold.

However, change arrived in early 2018. The balance sheet reduction (QT) program of the Fed accelerated in January 2018. Between January 27 and 31 the balance sheet of the Fed fell by €22 billion—it’s biggest short-time reduction in history (till then). Then, on February 4thth, markets cratered, and the DJIA posted its biggest daily point-wise decline, ever.

Things calmed down for few months, supported by the stock buybacks and profit frenzy created by the tax breaks of President Trump. But then the contraction of central banking’s global balance sheet (QT), commenced in September. In its wake, markets fell into a complete tailspin. Global QT lasted until the middle of December, when the Bank of Japan (BoJ) and especially the PBoC pushed the global CB balance sheet into expansion again with their ‘liquidity operations’. In late January, a panicky Fed caved in to the markets, cancelling already-scheduled interest rate hikes and hinting of ending balance sheet normalization (QT) (see Figure 1). 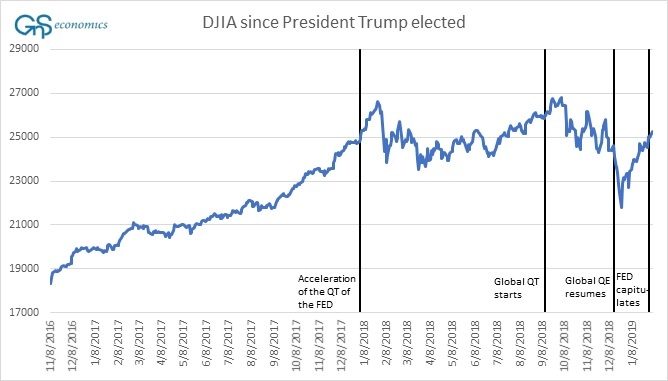 Bull markets end when buyers become less eager and sellers become more aggressive. Firms and investors decide that it’s time to get more liquid, that is, to increase money holdings. The selling starts. Some highly-leveraged investors may go bankrupt as the market value of their assets shrinks relative to their level of indebtedness. Still, some investors, conditioned by a long bull market, consider any dip a buying opportunity. A sharp ‘bear market’ rally develops, which are not uncommon. For example, during the bear market in Japanese stocks in the 1990’s, there were four rallies, where in each the stock market rose more than 20 percent.

Then, something happens. The market mood changes abruptly. The failure of a bank or a large company or the nagging feeling that a recession is coming, like in 1929, rattles the confidence of investors. The rush starts. Prices decline and bankruptcies surge. Liquidation starts out as orderly, but cascades into a selling frenzy. A panic takes holds, and markets crash. Credit stops flowing, and the real economy tumbles. A banking panic may ensue. Depression follows.

In spite of the arguments of some (macro) economists, business cycles do in fact die of old age. In a mature business cycle, consumers and corporations have ‘loaded’ themselves with debt and they start to cut back their borrowing. Furthermore, periods of economic expansion usually create unproductive investments which start to burden the cash flow of corporations. Firms and households decide that’s it’s time to increase money holdings. The credit and the economy contracts and the asset markets follow.

It’s evident that markets and the real economy are interdependent. Each can lead, in turn. When the Fed capitulated in late January, they most likely realized that asset and credit markets were getting the upper hand. Stresses were building, which started to have effects on the real economy. That’s why a pause was needed in the tightening cycle.

However, with over-levered, highly-speculative markets and an over-stimulated economy, there’s no middle-ground. It’s either up or down. If the economy in a mature business cycle cannot take even marginally higher interest rates (like 2.5%), there’s very little the central bank can do. Turning back to stimulus would only reinvigorate the market frenzy, while beneficial effects on the over-indebted economy would be miniscule. The Fed is trapped. There are no good options. It’s just playing the game of extend and pretend, until the can cannot take the kicking anymore, and the collapse begins. Then, there are only extreme options left.

Some economic commentators have called for more stimulus, as if more debt would fix the over-indebtedness problem. The reality is that there’s very little anyone can do. More China stimulus could help, but only for a short while. Still, as long the asset market frenzy carries the economy, the music keeps playing. But, when it stops, don’t bother looking for chair. The roof is likely to cave in. Be warned.

The title, historical examples and descriptions of manias, panics and crashes have been taken from the Manias, Panics and Crashes: A History of Financial Crises, by C.P. Kindleberger and R.Z Aliber.

Order our quarterly reports, Q-review, where we analyze the risks of global economy and the markets, and provide timeline and probabilities for the coming economic crisis. Annual subscription is available at our store. The subscription includes 4 reports and access to all older reports.Subscribe Now