We have been emphasizing the fragility of the global economy since September of 2017. However, we warned about the zombification of the world economy as early as June 2013:

Central banks kept their asset purchase, or quantitative easing, programs running and during the past year they have been slammed into overdrive. The combination of reckless central bank credit creation, which QE programs effectively are, and the zombification of the global economy have created a set of dangerous pre-conditions for runaway inflation.

In this report, we concentrate on this twin threat to the world economy. We also examine the growing fragility in the world’s financial markets.

The process of ‘zombification’

In the March 2019 issue of our Q-Review, we outlined the process behind the stagnation in global growth.

At the heart of all long-term economic progress is growth in productivity, that is, improvement in the ability to employ technological innovations to produce more out of the means of production, essentially labor and capital (machines, factories, etc.), as their simplified sum. As we have repeatedly cautioned since September 2017, the growth of productivity has stagnated, globally (see the Figure). 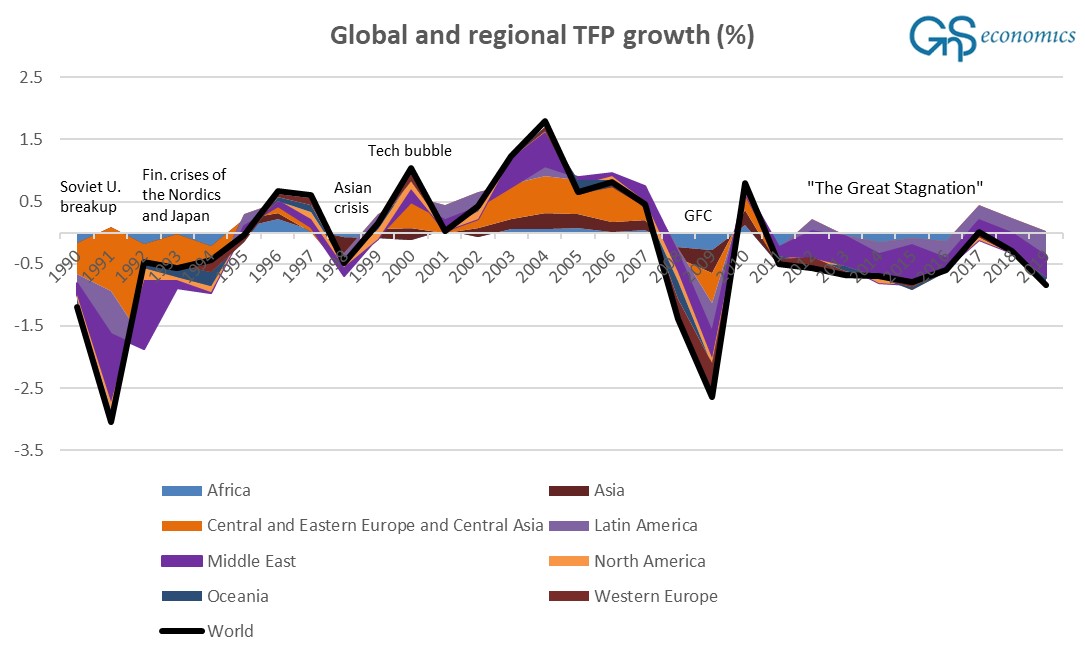 Figure 1. The regional and global growth of the Total Factor Productivity (TFP) and economic crises. Source: GnS Economics, Conference Board.

Effectively, the process of zombification is driven by an abundance of cheap and easy money. It can come from a variety of sources, but usually from either central banks or the government.

This is something in which governments have been (very) actively engaged since the financial crisis of 2008. During the spring of last year, such ‘easy-money policy’ was accelerated even further. This massively increased the number of zombie corporations.

While many argue that the devastating blow of the pandemic and ensuing lockdowns have been deflationary, we believe that, in reality, the opposite has occurred.

In a research paper published in November, the International Monetary Fund, or IMF, found that inflation was noticeably faster than the rate calculated by standard inflation measures in all regions. The reason behind this has been the change in consumption patterns. People have not flown, for example, but instead stayed home and ordered a variety of different goods online.

There have been reports of serious bottlenecks in the transport of vast quantities of commodities, which has lifted prices. Then there was the Ever Given -incident at Suez Canal.

So, inflation has been running hotter than shown in the official figures, but the real problems are likely to emerge when economies re-open and conditions move towards a “new normal”, which is now occurring in the U.S. Airlines, hotels, restaurants, etc., now have diminished capacity, which means that they may be unable to meet suddenly increased demand. What happens, when revigorated demand meets suppressed production capacity?

Most worryingly, the pre-conditions for a very fast inflation, or hyperinflation, are close of being met.

And even more zombies

In the December 2019 Q-Review we warned that in the third stage of the global economic collapse, the ‘zombified’ corporate sector would produce a “Flood” of bankruptcies when the recession hits. This would lead to the onset of the banking crisis in Europe.

When the coronavirus erupted in early 2020, leading to lockdowns across the globe, the world economy was confronted by an unexpected and artificial depression. This naturally would have been enough to topple zombie corporations, but the situation was salvaged by massive government stimulus programs and central bank support of enterprises.

In a multitude of countries, especially in Europe, laws were put in place that sheltered corporations and entrepreneurs from the demands of their creditors. These ‘debt moratoria’, effectively, acted as bankruptcy protection.

Through these measures, the probable evolution of the shock of lockdowns and pandemic into a global banking and economic crisis was stopped. However, the price of these drastic measures, as explained above, was that they created hordes of zombie corporations across the globe.

Alas, the zombification problem has, most likely, been exacerbated as a result of these interventions.

Inflation as the ‘battering ram’?

The world has almost certainly now entered a period of the most wide-spread uncertainty since the 1940’s. Many economic and institutional changes seem to be already in a state of ‘suspended activity’, that is, where the trends are established, but not yet obvious to all.

The failure of the corrupted global model of economic governance during the crisis of 2008 was a true breaking point for the global financial and political architecture. However, through extra-ordinary actions, the structure was saved—one more time. However, this resuscitated governance model has been living on borrowed time ever since. The meddling of central banks increased and then surpassed all previous limits with the global pandemic last year.

The financial markets, quite simply, cannot now sustain themselves without continuous support by the central banks and governments. The system has become wholly unsustainable.

Now the excessively levered financial markets are threatened by rising interest rates and emerging inflation. They may turn out to be the final nails on the coffin of the speculative financial mania and the central banks.

We detail the path to fast inflation and the potential global economic collapse in the Q-Review 3/2021 report. Buy it from ourGnS Store

previousIs hyperinflation on the horizon?
next2021: The year of the Black Swans?