When does the coronavirus pandemic end?

Probably the most pressing question in the world currently is: “when does the coronavirus pandemic end?”

This, the first truly global pandemic since the ‘Hong Kong Flu’ of 1968-1970, has thrown the world economy into a tailspin.  Its complete collapse has been prevented only through astronomical and utterly unprecedented—and unsustainable—monetary and fiscal stimulus.

The current renewed lockdowns across Europe have pushed many countries back into self-made recession with economic activity plunging close to spring 2020 lows.  The reaction of central banks, massive monetary stimulus and interest rates pinned at zero, has ignited rampant financial speculation of a degree only last seen during the Tech Bubble of 1999-2001. Financial markets seem ripe for a significant correction or even a major crash.

At the end of January 2020, we warned that the Coronavirus outbreak in Wuhan could turn into a global pandemic with devastating economic consequences. Two months later, this warning had materialized.

Last May, we warned about the possibility of a second wave arriving in the fall or winter and also about we calculated as the high likelihood of a banking crisis. The onset of the banking crisis has been postponed, again, by the stimulus and debt moratoria, but the second wave came, just as we feared.

Now, we forecast that the second wave of the pandemic is most likely exhausted. Growth rates of new cases are falling almost everywhere.

But now, we also anticipate a third wave later in this spring, possibly driven by a mutation—the “British variant”—of the coronavirus. There is also the possibility of a milder fourth wave in the fall, after which the pandemic would be over.

In 412 BC, Hippocrates described the first known account an influenza-like illness in Perinthus, a northern port town of what is now Turkey. The seasonal epidemic became known as the “Cough of Perinthus”.

It has been speculated that there may have been pandemics in 1510 and 1557, but the first reliably documented pandemic occurred in 1580. A virus emerged from Asia, spread to Africa and pushed through Europe in six months before reaching the Americas.

Another pandemic emerged in 1729, moving across the Europe in six months and the then-known world in three years.  And another started from China in 1781 before spreading to Russian and to Europe. Two pandemics occurred in the nineteenth century (in 1830 and in 1889). The latter of these spread across the globe in four months and resurfaced three times in the following years, eventually resulting in an estimated 1 million lives lost.

This summary of the known global pandemics reveals one important thing. While pandemic viruses keep on circulating around the globe, the active, or deadly, phase of a pandemic seems to last roughly 1-3 years depending on the speed of the spread. And most importantly, the ‘Spanish Flu’ spread freely throughout the world in three waves and was over in around 18 months—without vaccines.

We detailed the timeline of the ‘Spanish Flu’ in our May 2020 Special Issue of our Q-Review:

The earliest detailed report on the spring wave came from Camp Funston, Kansas, where a soldier fell ill on March 4, 1918. In total, 1,100 soldiers of the camp were hospitalized. The virus spread widely, but by summer, the first wave was mostly done.

The origin of the second wave (September–November) has by consensus been identified as Plymouth, England, a harbor town, from where the virus started to spread in late summer of 1918.

In some regions the time difference between the first and second waves was so small it was nearly nonexistent. There was also a third global wave in early 1919, but morbidity rates were noticeably lower. Three successive annual winter post-pandemic waves also occurred.

So, effectively the ‘Spanish Flu’ was done in around 18 months. It saw the most severe mutation between the first and second waves, which led to most fatalities during the fall of 1918.

Based on the similarities between the speed of the spread and the exceptionally short spans between first and second waves (which in some places has been close to nonexistent, too, in our current infection), we aligned our present forecast concerning the development of the Coronavirus pandemic on that of the ‘Spanish Flu’. For example, the Center for Infectious Disease Research and Policy (CIDRAP) at the University of Minnesota has done the same. We used their analysis as a base for our May forecasts.

In what is the current state of the coronavirus pandemic? We are clearly in the second wave, but at what stage of it?

The state of the pandemic

We estimate that we are at the end of the second wave. We base this on two observations:

Figure 1 shows the growth rates of new coronavirus cases in a 7-day moving average from the beginning of June 2020 through the end of January 2021. 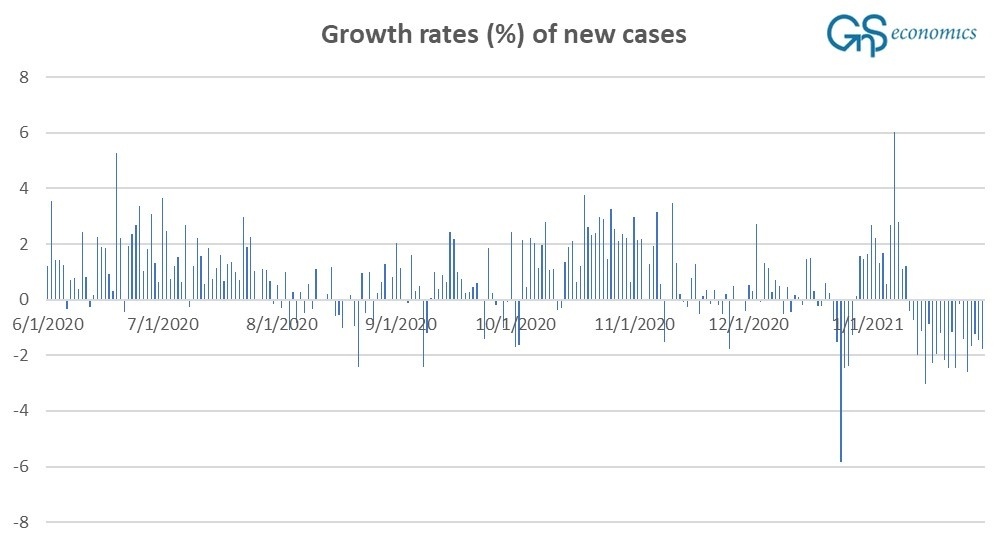 Figure 1 shows a notable, ‘trend-wise’ decline in the growth rate of new cases, but from where does this originate?

Country differences and the global trend

To gain clarity we analyzed growth rates from five countries: two (Germany and the UK) with strict lockdowns, two with mild restrictions (the U.S. and Sweden) and one with a hybrid strategy (Finland). Their stacked growth rates of new coronavirus cases from beginning of November 2020 through the end of January are presented in Figure 2. 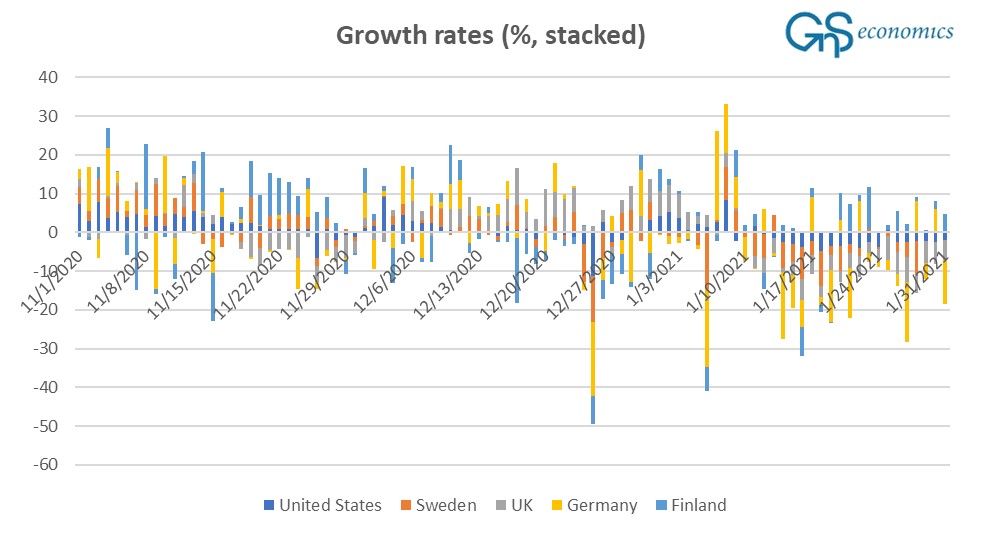 Figure 2. The growth rates of new coronavirus cases with 7-day rolling average in Finland, Germany, Sweden, the UK and the US. Source: GnS Economics, Our World in Data

Figure 2 shows that the trend-growth of new cases has turned negative in late December/early January in all countries except in Finland. In the United States, growth peaked during first three days of the year and in the UK during the first six days of the year. Sweden saw the growth peak in last days of 2020, while growth rates in Germany peaked just before Christmas.

Interestingly, declining growth rates are visible in countries with highly different strategies. Germany has been in lockdown since early November. The UK has been in lockdown since January 5th. However, Sweden issued only mild social distancing orders, which were tightened somewhat on the 8th of January. Individual states in the U.S. follow a mixture of strategies, but stay-at-home orders are in place only in Kentucky and California where they have been in effect since spring 2020. Vaccination rates were, and still are, relatively low in all countries, except in the UK.

The Finnish “anomaly” is probably explained by our strong suppression policies (partial lockdown) in the spring and our geographical distances. The ‘whims of the world’ seem to reach us a bit later. Thus, is seems that we are late-cyclical also on this.

The “synchronized” trend-wise decline in infection growth rates reinforces the view of academic literature that pandemics are in fact cyclical and that successive waves may also coincide globally.

With the combination of vaccines and the emergence of greater herd immunity, we expect the worst of the pandemic to be over by summer, regardless of how many people have been vaccinated by then.

Whether there will be a fourth wave in the fall depends on a multitude of factors, including even further mutations of the virus and the pace of vaccination. But it also seems possible that the pandemic may drag on a bit longer than its predecessors (in this instance to include a fourth wave) ironically because of the suppression measures which have succeeded in slowing its spread. Vaccines naturally work against this.

Even though forecasting the development of a pandemic may not, in the end, be much more than guesswork, it seems very unlikely to us that the path of the Coronavirus would differ radically from its predecessors. If this assumption fails, for reasons unknown to us, our forecasts naturally suffer accordingly. If the assumption holds true, however, the worst of the pandemic should be over by summer.

Unfortunately, the full brunt of the economic blow of the pandemic is likely to start to materialize in the coming months, when the economic “suspended animation” enabled by debt moratoria end and vast economic stimulus wanes. The consequent delayed economic pain is likely to last for 2-3 years.

Alas, the economic effects put in motion by the coronavirus pandemic are likely to be with us for some time to come, even if its worst health hazards are over by this coming summer.

Buy the Q-Review 12/2020: Aftermath report, where we go through the end-scenarios for the pandemic, fromGnS Store

We provide extensive analysis and forecasts on the world economy and on the global economic crisis, and the pandemic, in our Q-Review reports and Deprcon Service. They are are available at GnS Store