Q-Review 12/2020: The Aftermath of the Coronavirus

How will the coronavirus pandemic alter our economies?

It has already led to the introduction of draconian controls over our daily lives and enlarged the role of the central bank in the economy even further. But what kind of future are we heading into?

In this, probably our most speculative special report thus far, we envisage scenarios that reach beyond the current economic malaise, into the aftermath of the pandemic.

We have been conducting scenario-based forecasting since our inception in 2012. We typically rely on three scenarios, which can be broadly classified as: the bad, the good and the most likely.

In the Q-Review 12/2020 we constructed three scenarios  entitled: The New Normal, Global Dystopia and Reset and Recovery. Their names suggest the obvious, which is that there is only one way to resume a sustainable trajectory of economic growth: after suffering through collapse.

But how did we end up to this sorry state in the first place?

Since the 1930s monetary policy has grown into a tool to combat recessions.

In 1987, the then-Chairman of the Fed, Alan Greenspan, expanded intervention by bailing-out financial markets when he slashed interest rates and provided billions in liquidity after the collapse of the stock market on the 19th of October. This perceived liquidity guarantee became known as the ‘Greenspan Put’.

As we have been detailing for years, these policies ‘zombified’ the global economy and seriously distorted the risk-and-reward relationship in both financial markets and the real economy. And during the “Corona bailout” from March 2020 on, central banks effectively socialized many parts of the capital markets (see, e.g., Q-Review 6/2020).

Many economists have speculated whether the global economy could follow the path of what has been called ‘Japanification’ or ‘zombification’. We have already detailed the path Japan took to “zombification” after the financial crisis of the 1990s in this blog.

A single rich country can “Japanify” because it can rely on the support of global companies and banks that have not been ‘zombified’. But a critical mass of the world economy cannot reach a state of ‘Japanification’ because this implies there would be no one else left to provide both demand and capital. So, global “Japanification” is really not an option for the aftermath.

This leaves us with two: Global Dystopia and Recovery and Reset.

In our December 2018 report, where we envisaged for the first time the three scenarios of the collapse, we posited one which theorized that to stop the collapse of the financial markets, central banks would be obligated to buy a significant proportion, perhaps even the majority of global risk assets, estimated then to top $400 trillion.

However, there is a much more sinister scenario imaginable. Central banks are currently pondering the issuance of Central Bank Digital Currencies (or “CBDCs”). This would change the landscape of our economies in a profound, permanent, and deeply-intrusive way.

Fortunately, there is a way out, through curtailing the power of central banks, or even eliminating the central banks themselves.

This would take away the ‘punch bowl’, or the ability of governments to uphold their status and reach by printing money (see the Figure). This would mean that as many governments would have defaulted or endured serious debt crises, economic systems would likely have become both more free and more responsible. 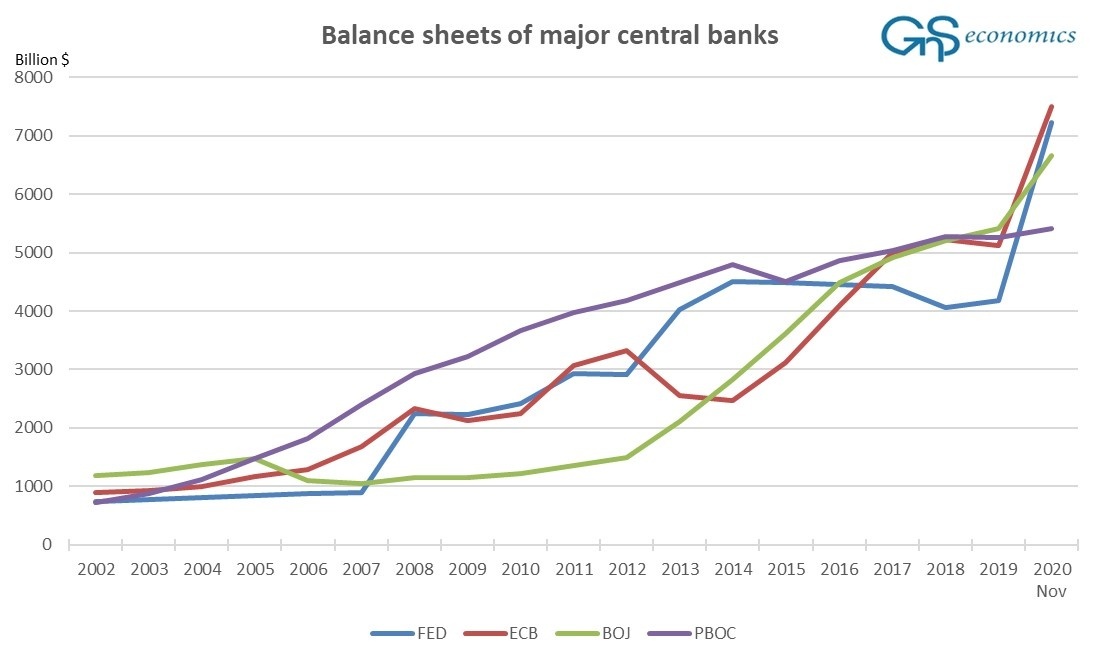 Figure. The balance sheets of the BoJ, ECB, Fed and the PBoC in billions US dollars. Source: GnS Economics, BoJ, ECB, Fed, PBoC

At the end of the day, ordinary people will decide which scenario will prevail. Based on the rush of global leadership to issue central bank digital currencies and to convene ‘Bretton-Woods 2.0’, the economic and political end-game of the pandemic nears.

Just a year ago, all the above would have been almost utterly inconceivable to most of us. Such ideas lived only in the minds of either well-informed or highly-skeptical economic theorists.  Now, we all must acknowledge that the Global Dystopia, certain to have been deemed ‘conspiratorial’ only a year or so ago, is now a frighteningly plausible scenario of the aftermath.

If we, the ordinary people, will not recognize the emerging threat of the Global Dystopia, and fight against it, one day we will wake up in a world where our most cherished freedoms have quietly slipped away, almost unobserved.

The Reset and Recovery scenario will lead us to freedom and prosperity. It is the most challenging scenario in the short-run, but like so many things in life, material or immaterial gains must be obtained through sacrifice—even hardship.

By sacrificing some of our current living standards in a cleansing global economic retrenchment we increase the probability that they will continue to grow in the future. If we desperately hold on to what we have, no matter how dysfunctional or counterproductive, our economies will continue to stagnate, and we stand to eventually lose the most important characteristic of our present societies:  liberal political and economic systems.  If we fail to take the difficult road now, future generations will not regard us kindly.

2021 is likely to be a crucial year. We sincerely hope everyone is fully prepared for the battles we will face.

previousAre we in a ‘New Normal’?
nextCan the world economy ‘Japanificate’?