We have been monitoring China closely since March 2017. We were one of the first to show that China had driven the global business cycle since 2009 and that the remarkable recovery of the world economy from the 2015 slump was mostly China’s doing.

The limits of stimulus

China has been very aggressive in its efforts to curtail any deeper contraction in its economy. This has produced some remarkable trends, like the relationship between China’s GDP and total debt shown in Figure 1. 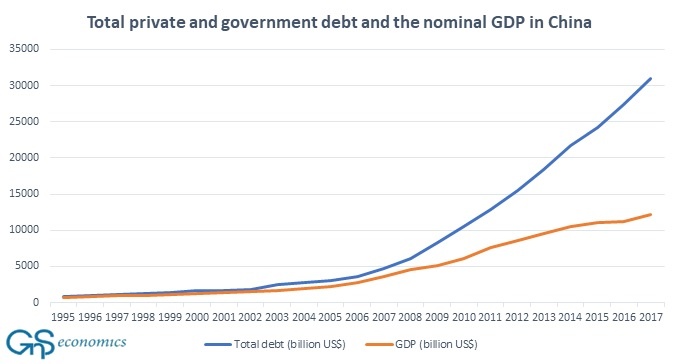 It has been clear for quite some time that China’s economy is on an unsustainable path. We warned about this in September 2017, and summarized our findings bluntly:

Because of the massive levels of the debt and unproductive investments, the economy of China is heading to a crash.

Since late 2018, China’s economic policy has been to engage ‘spurts’ of stimulus, which have kept the economy growing (although it’s an open question how fast the economy is actually growing). But, 2019 brought a monumental change. 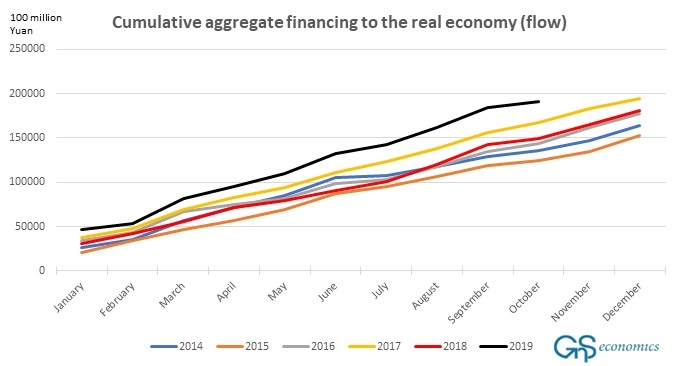 In 2019, China enacted record-breaking debt-stimulus, with the growth of both aggregate social financing to the real economy (see Figure 2) and financing through the shadow banking sector surpassing previous high-water marks. And yet, China’s GDP growth rate kept falling. It seems evident that China has reached the point of ‘debt saturation’.

Where to go, when the road ends?

Due to massively unproductive investments made in previous stimulus cycles, the effectiveness of additional Chinese stimulus to bolster economic growth has now collapsed. This is the main message of China’s 2019 record-breaking and mostly ineffective stimulus.

Some are hoping that China would launch similar aggressive infrastructure and investment spending, which was seen in 2015 and 2016. However, this is something China may simply not be able to do.

In 2015, the official budget deficit of China was less than one percent. When the “shadow-financing” of local governments was taken into account, the deficit was around five percent. Now, the official budget deficit is over five percent, but if financing by local governments through the “shadow” banks is included, the deficit mounts to over 11 percent—a very significant number.

This quite simply means that China does not have the ability (financial space) to launch a massive infrastructure stimulus programs á la 2015, unless it seeks to finance them directly through the central bank via pure debt monetization. We consider this to be an extreme emergency measure (the “last-option”), which China is very unlikely to take up at this point.

Towards the correction (crash)

So, what options remain for the world economy? Central banks have already reverted to massive easing by restarting their QE and “Not QE!” programs, and by cutting rates. What’s notable that this has been done outside actual recession conditions. In a way, that is worse.  It’s a sign of sheer panic—a very human reaction to the spectre of losing control.

Central bankers are, justifiably, horrified by the prospect of the collapse of the ‘everything bubble’ in global asset markets which they are primarily responsible for having created.  As we explained in Q-Review 3/2019, central banks are unlikely to survive such a calamity—at least in their present form.

The thing is that, unlike in 2009 and in 2015/2016, monetary stimulus will be ineffective, because China’s stimulus will not be able to resuscitate the global economy this time around. Alas, the monetary easing may—as it has for the past ten years—lead to booming asset prices, but the real economy will continue to deteriorate.

It’s not hard to imagine how this divergence is likely to play out, when investors finally realize that a recession is close. Think 1929.

Buy the Q-Review 2/2019: Prepper’s Bunker -report, where we present how to prepare for and benefit from the coming crisis, fromGnS Store