The end of the ‘Chinese Miracle’

We have been following China closely for nearly four years. We first warned about the unsustainability of China’s growth in March 2017 and have continued to issue warnings ever since (see, e.g., this, this and this).

Now, China is reaching the end of its debt-driven economic model, and thus well-along in the end-game of the ‘Chinese Miracle’. This will bring drastic changes to the world economy, which will fuel the global economic collapse of 2020-2023.

China stimulated its economy aggressively in Q1 and Q3 2019, but we have not observed a similar emphasis on infrastructure investments as we saw in 2015/2016. In its record-breaking stimulus program in Q3, for example, China concentrated on providing loose credit to enterprises through both conventional and “shadow” banks.

What is notable is that even with this record stimulus, China has kept its economy growing barely above the “official rate”. This tells us that the Chinese economy has reached or is very close to reaching the point of debt saturation, where households and corporations simply cannot absorb any more debt, and any new debt-issuance fails to stimulate the economy. We’ve been warning about the proximity of this point since September 2017.

Evidence also suggests that during the fall China has been desperately forcing debt into the economy, probably to appear “strong” in trade negotiations.  The November data on aggregate financing, for its part, confirms this (see Figure 1). It rose at the second-fastest pace in November surpassed only by the year 2016, when China was engaged in “maximum stimulus”. 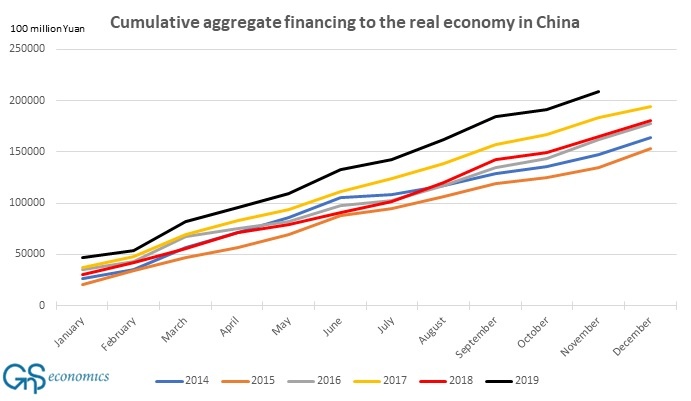 However, it’s clear that China cannot keep such an extreme pace of debt-growth going. The debt load is just too high while productivity growth has stagnated.  Though a massive infrastructure-spending program, for example, could revive growth, the ability of China to issue fiscal stimulus is starting to be seriously limited.

The end of the runway

At the end of 2018, the budget deficit of the Chinese government was close to five percent. However, if the off-balance sheet (“shadow”) financing of local governments is taken into consideration, the budget deficit rises to over 11 percent. At the end of 2014, the official government deficit was less than one percent, but an accounting which includes local “shadow” funding was around five percent.

This effectively means that China is fiscally unable to underwrite massive infrastructure projects and so any new world-economy-saving stimulus from China, as in 2015/2016, will be practically impossible. A new infrastructure initiative could only be realized if its costs are monetized by the PBoC, and so should be regarded as a last-ditch option reserved for an existential crisis. We also suspect that Chinese authorities would like to have some ‘ammunition’ left over for an actual recession.

We have also heard reports that smaller local lenders have become wary of expanding their loan portfolio as requested by Beijing. This is most likely due to the fact that the policy line has changed from “bailouts” to “defaults”, and the banks fear that they will be forced to bear the brunt of non-performing loans in full. It’s also clear that there are massive amounts of non-performing loans burdening the balance sheets of Chinese banks.

This is why China, ultimately, will be unable to rescue the world economy this time around.

The big question is:  what will Chinese leaders do? Will they try to force debt into the economy in a desperate effort to postpone the impending recession? If so, this would probably extend the global business cycle for few quarters.

But, as China has already surpassed all historical examples of ‘credit bonanzas’ (see Figure 2), this would also guarantee that by 2021 the Chinese economy would be in for a ‘hard landing’ (crash) taking the global economy with it. 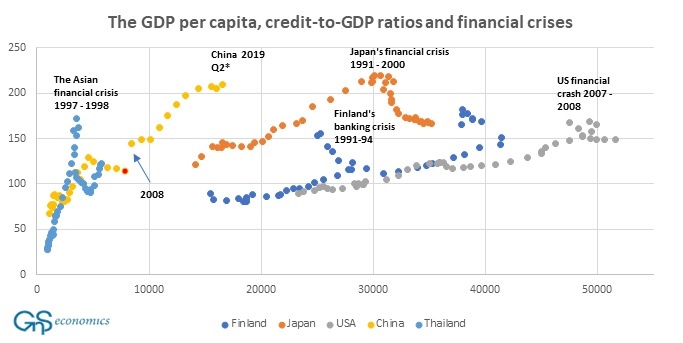 Figure 2. The GDP per capita, share of non-financial private sector debt to GDP and the onset of financial crises. *The Q2 GDP per capita for China is based on our calculations. Source: GnS Economics, BIS, World Bank

The second option for Chinese leaders is to enact short-term “surgical” stimulus measures to keep the economy from collapsing. This would mean that the global economy would continue to sink and enter into a recession in 2020. While this could shelter Chinese economy from utter collapse, it could still lead to serious political instability (see Q-Review 3/2019 for more info).

As we have insisted in our work since September 2017, the “Chinese Miracle” has been more of a “Potemkin Village” for more than a decade. Because China has been kept growing by an  incomprehensibly large increase in debt, its economy is actually a massive  and vulnerable Ponzi-scheme waiting to collapse.

Alas, the end of the ‘Chinese Miracle’ approaches, and it’s going to painful for everyone.

Purchase Q-Review 4/2019: A special report on the economic collapse of 2020-2023, where we detail how the coming global economic crisis will proceed and what role China plays in it. Buy Now

Purchase the Annual Subscription of our Q-Review -reports to understand the coming changes in China and on how to prepare for and benefit from the coming global economic crisis. Buy Now