Global stock markets have been wobbly after the Federal Reserve failed to impress and the trade war heated-up. Combined with the weakening global economic outlook, there are not many reasons for stocks to rally.

Many are also wondering about the direction of the economy and markets, and for good reason. Although the Eurozone economy is close to imploding, the U.S. economy has produced decent growth numbers. Still, the underlying economic weakness is visible in the falling figures of Purchasers Managers surveys (PMIs) also in the U.S.

As we explained in our June forecasts, stopping the deterioration in economic conditions across the globe would require massive new stimulus programs from the major central banks and China. All of these have failed to materialize, and it is now getting late.

With the considerable increase in trade tensions, the situation in the global economy is becoming dire. Here we briefly explain what to expect.

Our subscribers have been continually briefed on the role China has played in the current expansion since September 2017.  Our in-depth analysis of the global economy revealed the true source of global growth after 2009: The Chinese debt machine.

To our amazement, we found that not only has China been responsible for about 55 % of all credit created globally, but also close to 52% of all capital investments in major industrialized nations since 2009. Moreover, China had accomplished all this with a never-before-seen debt binge and investments through (mostly unprofitable) state-owned enterprises, which have led to a collapse of  productivity growth (see Figure 1). As a result, China currently has a very high share of “zombie companies” (see, e.g., our blog). 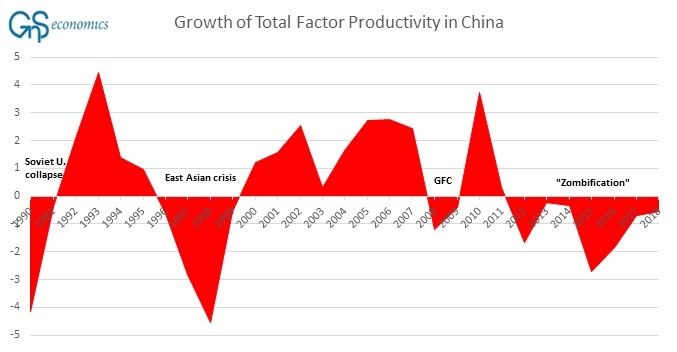 As we speculated prior to the 19th Congress of the Communist Party of China in October 2017, the policies of China changed quite drastically after the Congress. In 2015/2016, the Chinese leadership organized a massive stimulus program through the ‘shadow banking sector’. It not only stimulated the global economy, but also pushed the debt-to-GDP ratio to astronomical levels.

Chinese leadership almost certainly understood the unsustainability of such policies very well, enacting a policy of deleveraging immediately after the Congress. OECD leading indicators testify that the slowdown of Chinese economy had, in fact, already started in the fall of 2017 (see the June forecast for details).

This policy removed crucial support from the global economy slowly but surely, pushing other economies down. Without the massive deficit-spending programs enacted by President Trump, a recession would probably have started in early 2018 (see our blog).

Late 2018 and early 2019 gave us a glimpse of the likely new economic policies of China. At that time China launched brief, but gigantic (record-breaking) debt and fiscal stimulus programs. They lifted global markets and, combined with a drastic U-turn at the Fed, saved the U.S. equity markets in early 2019. However, Chinese leaders withdrew most of the additional stimulus measures in the second quarter. It thus looks like China is trying to manufacture a ‘soft landing’.

As we explained in our June forecasts, China has only limited effective additional means left to stimulate the economy. If it would use them fighting the current downturn, it would eventually lead to a hard landing (crash) of the economy. It’s very likely that Chinese leadership will try to avoid this. This, however, implies that global recession is unavoidable.

Pushing on a string (but hard!)

One cannot blame the central bankers for trying. They have left no stone in monetary policy unturned in their efforts to stimulate global growth. Unfortunately, these attempts have caused more harm than good.

We’ve been warning about the unintended effects of very low/negative interest rates and the asset- buying programs of the central banks since June 2013. In the March issue of our Q-Review, we explained why the ‘unconventional means’ of central banks have destroyed the global growth model that has governed the rise in our living standards for the past 200 years.

Now, the “jig” of central bankers is almost “up”. Their role as managers of global and regional economies has been founded on the concept that the short-term interest rates they set would be enough to stop recessions and control inflation—in short, to regulate economic outcomes in a positive way.  Now we know this hypothesis to be false.

The bottom line is that central banks are effectively out of means to stimulate. Rates are low or negative everywhere. Central banks have loaded their balance sheets with government and corporate debt (see the Figure 2 below) and are now approaching their political limits. 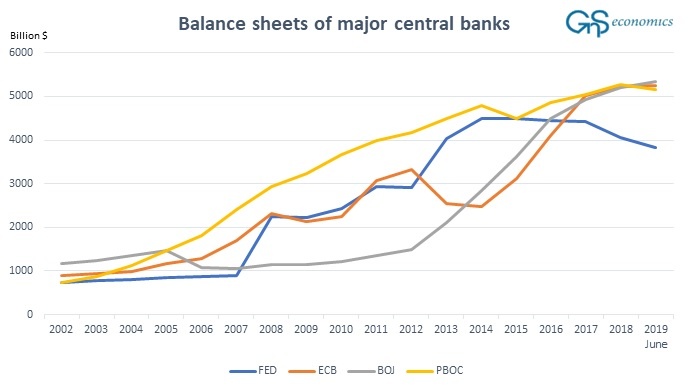 If capital markets crash, the likelihood of the U.S. Congress accepting the bill for auditing the Fed is relatively high. The ECB, on the other hand, is bound by the strict Articles of the Treaty of the Functioning of the European Union (TFEU), and the German Constitutional Court.

Moreover, if a large country leaves the Eurozone and defaults on its ECB-held debt, the imperative to recapitalize the ECB could arise in short-order. This would also mean that the ECB has directly funded a member government, which is strictly forbidden by the Article 123 of the TFEU. Political and legal ramifications would likely be massive, and the Eurozone could shatter in the aftermath. Yet, many seem neither to recognize the looming political limits and risks faced by the major central banks nor their likely cataclysmic aftershocks.

In practice, central banks have only one potential ploy remaining. They could push interest rates even more deeply-negative, but this would only work if cash were banned. It’s highly unlikely that citizens in, for instance, Germany and in the U.S. would agree to this.  Alas, central bankers are effectively “out of ammo”.

The King is dead (long live the King!)

China, not the central banks, saved the world economy from collapsing after 2008. The exceptional measures of central banks were crucial in the acute phase of the crisis, but after that phase had passed, they turned into a serious and dangerous drag on the global economy.

Now, with the ability of China to carry the world economy in irreversible decline, the “threat” of central bank intervention has been the only inoculation against a market crash. With the faltering response of the Fed to the demands of the markets in late July and the unimpressive posture of the ECB in early July, we thereby approach the point where markets call the bluff of central bankers. When that happens, a crash in capital markets is practically unavoidable.

Central bankers are not “masters of the universe” and they surely do not “have the back” of global capital markets.  They are simply banks with the ability to earn seigniorage and to twist the accounting rules.  Far from being “supermen” they are, in fact, mere mortals.

We have trusted the central banks to defend us in recessions and crises, and to generate economic growth and inflation. That time has now passed.

Thus, the “King” is dead, and any effort to resuscitate central bank hegemony will just make things worse. Unfortunately, whatever option policy makers choose after a decade of ill-advised policies, it will have dire consequences for us all.

In the “Prepper’s Bunker” -report we explain how to prepare for coming crisis. The report is available fromGnS Store

Keep up-to-date on developments in China and policies of central banks as well on growing risks in the global markets through our Q-Review -reports. The annual subscription (4 issues) is available for subscription atGnS Store